“The Territory” succeeds and struggles in nearly equal measure, while always dedicated to it its main advocacy for the Amazon rainforest’s Indigenous Uru-Eu-Wau-Wau people. For three years, director Alex Pritz and a small crew filmed the struggles by the Uru-Eu-Wau-Wau people to keep their Indigenous land. There are fewer than 200 of them left, but they have great pride in their culture and the land of their ancestors. The protection of their land is essential for more than their own livelihood and rights, but also the world—the Amazon rainforest holds a great deal of importance as the “lungs” of the world. To watch this land then be destroyed gradually by “invaders” wielding fire and chainsaws is harrowing in its own right.

This is a frustrating documentary, in that it honors the work of its subject with wide-screen cinematography and leaves-crunching sound design, but as a viewing experience cannot shake the overall feeling of a dirge. The score seems to recognize this problem, whipping between many different traditional and non-traditional arrangements, more or less trying to make sure we understand the urgency. And for all of its heroes that it introduces to us, like the young leader Bitate and the longtime Uru-Eu-Wau-Wau advocate Neindha, their stories run flat, even with what they symbolize.

In its depiction of this tension over the land—which shouldn’t even be a question the Indigenous population have to deal with—“The Territory” boasts access to different parties. Pritz doesn’t just have the ideas and anger of the Uru-Eu-Wau-Wau, but also that of the smaller farmers who embody that hunger for expansion, who are themselves making the way for big farmers. The 49-year-old Sérgio is the symbol of this movement, and speaks about how the Brazilian dream is to own land and make money from it. He starts an association to lead the way for this to happen on Indigenous land, especially after the election of Jair Bolsonaro fires up people like Sergio to just take what’s not theirs.

But then Pritz’s penchant for nature B-roll cuts from Sérgio and his mini capitalism and his red hat to a butterfly being stuck in a spider’s web, and it plays like unnecessary commentary. We already know who this documentary finds most heroic and villainous, and “The Territory” has a common storytelling problem in not being able to show "both sides" without it feeling so anti-complex.

Some light comes into this documented tale as it captures what can happen when Indigenous people are empowered, but also—unfortunate how this goes—when they eschew relying on the state police for help. It is also at this point in time in which they are given their own film cameras, which helps them document their peaceful policing (finding houses and people illegally placed on Indigenous land) and also their culture.

There is a recognizable nobility in how Pritz has given them a certain power by filming their experience, leading to its last line of dialogue about how the world needs to know what is going on in the rainforest. But the documentary's assembly has a shapelessness that eats at its overall impact. “The Territory” is an alarm, but eventually its call turns monotonous by its own doing. 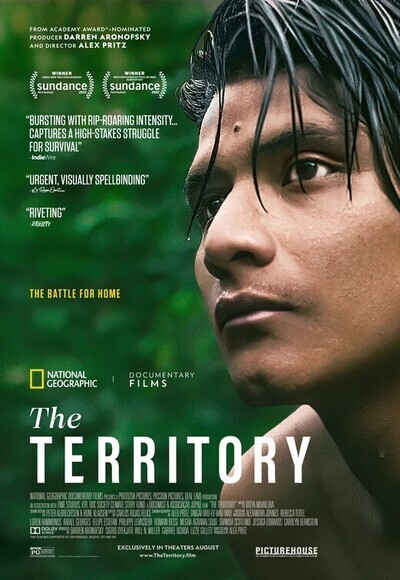