The Sum Of Us

If there is anything worse than a parent who disapproves of your sex life, it may be a parent who approves too much. That possibility is raised, but not explored, in "The Sum of Us," an Australian comedy about a dad who is so proud of his gay son that he pokes his head into the bedroom during sex to ask how everyone would like his tea.

"The Sum of Us" takes place in Sydney, where Jeff (Russell Crowe), a gay man in his 20s, lives with his father, a widower named Harry (Jack Thompson). There is a history of homosexuality in the family, going back to a grandmother who had a lifelong companion.

Quite the contrary. When Jeff brings home a new lover, the lover is nonplussed to discover that Jeff's father not only is in the next room, but is quite cheerful about what might be going on in this one.

The story, based on a play by David Stevens, involves the unexpected complications that Jeff experiences because of his open-minded father. Jeff's problem is that he despairs of ever finding a life partner. When he finally brings home a candidate named Greg (John Polson), Greg simply cannot handle Harry's acceptance. His own parents have no idea about his sexuality; his father is a sexist brute who sees Greg on TV in a gay pride parade and turns mean and ugly. Greg, depressed by Harry's acceptance, bails out ofthe relationship with Jeff.

That leaves Jeff more depressed than ever, and then the plot takes a melodramatic turn that I will not reveal, except to say that it milks the poignancy of Harry's love for his son to an almost cloying degree.

The movie betrays its stage origins in several ways, but for me the most distracting was how it kept "audience lines" - lines of dialogue that must have worked well in the theater, but seem too mannered and "written" for the movies. A sample exchange: "You know what they say about the early bird." "Yes, but I don't think that's the kind of worm they were referring to." Another device that gets old is the freedom the characters have to talk directly to the camera, sometimes even turning to wink at us in the middle of a scene. This can work, rarely, but here it creates a false matey feeling; Harry is so intrusive he all but asks us what we'd like in our tea.

Parents can be your friends, yes, and your confidants, yes, and open relationships between parents and children are possible, and wonderful. But surely some rebellion is necessary as part of the maturing process; it may not be right for a parent to deprive a child of any opportunity to make a declaration of independence. "Parents," Peter Ustinov once wrote, "are the bones on which children sharpen their teeth." But not in this household, where Harry is so nosy, benevolent, curious and obtrusive that Jeff is hardly allowed to have a life, let alone a sex life, of his own. Jeff feels some anger and frustration at his father, but not enough, I feel, and as the movie slips into its melodramatic third act, it avoids the issues that are bubbling right beneath the surface of the story in order to get sidetracked with soap opera.

Sometimes movies end with little mottoes on the screen. I have an idea for this one: "Be careful what you ask for; you might get it." 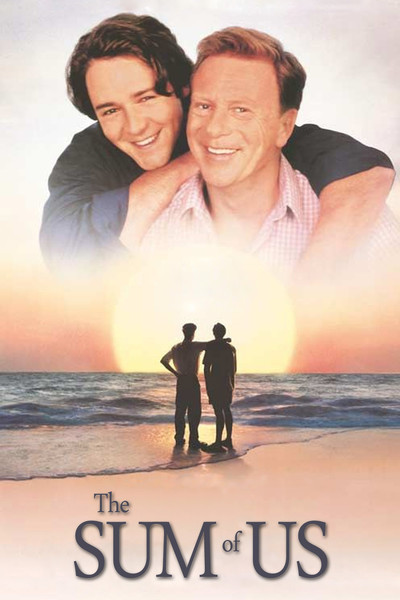