Having already failed to mine such seemingly surefire spoof subjects as romantic comedies ("Date Movie"), disaster movies ("Disaster Movie") and the "Twilight" saga ("Vampires Suck") for anything remotely resembling laughs, the writing-directing team of Jason Friedberg and Aaron Seltzer now take aim at "The Hunger Games" with their latest effort, "The Starving Games," and the fact that the title, as witless and uninspired as it may be, constitutes its humorous high-water mark should indicate just how ineptly they handle things this time around. (To make matters worse, the second-funniest involves Diedrich Bader uttering the phrase "a partially-eaten pickle.")

Whatever you might think of the actual "Hunger Games" saga, either in print or on the screen, you have to admit that the combination of its outrageous premise of kids killing other kids as part of a yearly entertainment in a dystopian and oddly coiffed future with its relentlessly self-serious tone would seem to lend itself perfectly to parodists ready to poke fun at the story, not to mention the massive fan base it has developed over the years. Of course, to do this would require the involvement of people using barbed wit and keen insight as their weapons of choice. It would also require some degree of talent and effort for it to come off successfully and face it, if such people were involved, we probably wouldn't be dealing with a film entitled "The Starving Games" in the first place. (Well, at least not one in which the punchline of the third joke on display references Darfur, that is…)

Friedberg and Seltzer have instead chosen to deploy their same old hackneyed approach—take familiar scenes from the property being mocked, populate them with actors who look vaguely like the real actors (provided that you a.) squint very hard and b.) are legally blind) and tack on a punch line that involves either a pop culture reference that will be dated long before it hits theaters, some form of gross bodily function or people suddenly get shot, stabbed or blown up real bad. To give them credit, their Katniss equivalent—known as Kantmiss Evershot, hee-hee—is played by an actress named Maiara Walsh who, despite the shabbiness of the material she has been given to work with, displays enough of a sense of comic timing to suggest that she could one day get laughs if she could work with a screenplay that did not require her take about a gallon of bird poop to the face at one point.

Even though "The Starving Games" has barely clocked in at 71 minutes before the commencement of the endless blooper reel preceding the even-more-endless end credits, Friedberg and Seltzer apparently could not figure out how to mine this particular vein of material to sustain themselves from beginning to end, and so have contrived to fill in the deader spots with even lamer spoofs of whatever was big in popular culture when it was being filmed. This time around, there are long and unfunny jokes at the expense of such subjects as "The Expendables," "Harry Potter," "The Avengers," "Avatar," "Oz the Great and Powerful" and Taylor Swift. If the idea of a film in 2013 taking bold aim at "Avatar" seems a bit dated, the 2012 copyright suggests that this particular effort has been sitting on the shelf for a while and is only getting dribbled out so as to glom onto the publicity for the upcoming "Catching Fire." Then again, I suppose we should count our blessings because if the film had tried for more theoretically cutting-edge material, the Taylor Swift stuff probably would have been replaced with some malarkey involving Miley Cyrus and twerking, a move that would have brought no small measure of relief to Taylor Swift and practically no one else.

Demonstrating the technical verve of one of those movies that only appear on Cinemax after 1 AM (though without the fierce artistic commitment) and the kind of comedic invention that would have earned it an exceptionally harsh rejection letter had it been submitted for publication in "Cracked," "The Starving Games" has the look and feel of a talent show put on by a high school whose imminent closing has not inspired any noticeable public outcry. And yet, even though the film is witless enough to make the abysmal "Movie 43" seem almost nuanced and competent by comparison, there is a bit of a bright side to be had and it is the fact that while there was once a time when these Friedberg-Seltzer joints would open up in thousands of theaters across the country, this one is only being dribbled out into a handful of presumably condemned multiplexes and on VOD systems. This would seem to suggest that some people out there are learning from their past mistakes—too bad that their ranks do not seem to include Friedberg and Seltzer themselves. 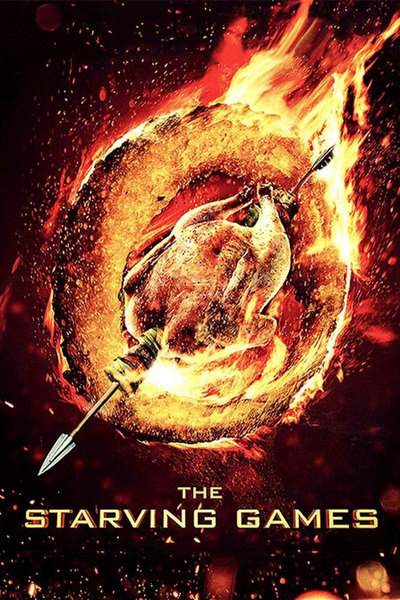