An adventurous psychological drama on the subjectivity of language, actor-turned-director Catherine Eaton’s “The Sounding” impresses more with its majestic and ageless feel than its vague ideas around the human mind.

While Eaton’s story (co-written by her and Bryan Delaney) is set on the rocky coasts of contemporary Maine—more accurately, a nearby storybook island called Monhegan—the location almost feels out of a deeply romantic period film, like “Portrait of a Lady on Fire,” with a fearless female lead navigating its wild and windy shores. Played by Eaton in a muscular and intensely emotive performance, she is the striking, blue-eyed Liv; a woman who’s lived on this island her entire life, completely wordless. Raised by her scientist grandfather Lionel (Harris Yulin), Liv leads a happy life of silence and idealistic essence on her own chosen terms. But the reality she’s known thus far crumbles one day due to Lionel’s flailing health and the future of unknowns his death brings along.

The troubles start when Lionel calls for a fellow scientist, his former student’s brainy son Michael (Teddy Sears) onto the island, just to ensure that the brilliant and idiosyncratic Liv has someone to rely on once he’s gone and doesn’t become a pawn for scientific research. It’s during this time when the young woman starts speaking little by little, though entirely through the texts of Shakespeare. And when the eventually grief-stricken Liv puts her own life at risk on the treacherous island, Michael unsympathetically spearheads her move into a psychiatric center in Portland, despite the desperate protests of Liv as well as her friends, neighbors and Lionel’s trusted lawyer Roland (Frankie Faison).

In weaving Shakespeare into Liv’s world, Eaton proves to be a savvy and confidently crafty writer in command of The Bard’s words. When ruthlessly interrogated about her silence, “Why should calamity be full of words,” Liv responds, quoting Richard III. When her tormentors insist that she communicate in normal, socially acceptable terms and use her own mind’s words, “Remorseless, treacherous, lecherous, kindless villain,” she shouts back, a nod to Hamlet. In short, those who share Eaton’s remarkable authority on Shakespeare will have their work cut out for them in matching Liv’s lines of dialogue with the proper work they’re pulled from. Yet even the most scholarly Shakespeare devotee might hit their mileage with the movie’s increasingly wearisome routine.

The filmmaker hints at a sturdy character defined by her distinctions and divergences, perhaps a little like Jane Campion’s elegiac and rebellious Ada from “The Piano,” and the eponymous Nell from Michael Apted’s 1994 film about a wild loner with a one-of-a-kind language. But she doesn’t quite grapple with the character’s mental illness in the most sensitive or responsible terms; Eaton also refuses to deepen the reasons behind Liv’s chosen method to communicate with the world at the same speed that she advances the mystery of her condition. In that regard, “The Sounding” struggles to figure out what to make of Liv’s riotous episodes at the Portland institution, beyond using these scenes as performative opportunities to critique one-dimensional Nurse Ratched types, and display a gifted actor’s diverse dramatic talents. Once they register as mystical peculiarities or plain stubbornness, Liv’s complexities fizzle in due course.

Still, Eaton pulls off a handsomely made film, shot with cool grandeur by cinematographer David Kruta, elevated by the strong on-screen chemistry between Sears and Eaton. And when the director doesn’t indulge in stylistic excess, like a puzzling, music video-like sequence cringingly accompanied by an on-the-nose needle drop (namely, Daughter’s “Youth”), her tale proves to be a curious beast you can’t entirely disregard even when it begs for more philosophical substance to stand on. 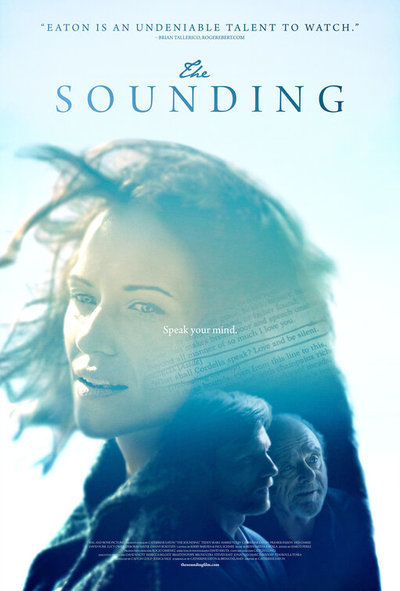