The Sound of Silence

In this ambitious, tonally intriguing comedic drama, Peter Saarsgard plays a self-described “room tuner.” He provides a useful service to troubled New Yorkers who can’t quite put their fingers on what’s costing them sleep and/or a general sense of ease. He examines their dwelling spaces, armed with tuning forks and an array of vintage-looking audio equipment. He identifies an out-of-tune element—frequently it’s a toaster with a dissonant, barely audible hum—mutes or replaces it, and voila, the inhabitant is able to rest again.

The New York City in which the character, Peter Lucian, lives and works is itself oddly more quiet than the real-life Manhattan. This detail is one of the several crucial ways in which the movie misfires. Directed by Michael Tyburski, who cowrote the script with Ben Nabors (elaborating on a prior short film that the two collaborated on), the movie is a distinctive showcase for Saarsgard’s lowkey intensity. He’s utterly convincing as a deep wonk, standing in Central Park, oblivious to the life around him, preoccupied with his tuning forks.

Lucian has a kind of unified field theory of urban acoustics, and it’s attracting attention from a big bad corporation at the same time that he’s failing to find a solution for one of his clients, Ellen, played by Rashida Jones at a register far more subdued than we’re accustomed to. The mystery Lucian can’t get his head around may have more to do with an absence of sound than anything currently in Ellen’s apartment—he dimly declines to follow-up when Ellen lets him know that a boyfriend has recently moved out.

For Lucian, the tuner gig is more about the individual he’s helping; as much as the potential money involved in selling out may smell sweet, he can’t bear the thought of being commoditized. A research assistant (Tony Revolori) detects no such downside. An editor of a scholarly journal responds with incredulity to Lucian’s personal approach, saying she thought his theories a joke.

As treatments of obsession go, the movie pitches itself significantly to the right of such antecedents as “The Conversation” and “Pi.” As eaten up as he gets, Lucian remains quiet, bottled up, reticent. In keeping with his tweedy clothing, the cinematography takes on a dun, at times almost sepia tone—this is a New York in which it’s almost always autumn, it seems. The approach is intriguing but gets a little monochromatic after a while.

I used to work in consumer electronics, and I actually knew people who styled themselves as room tuners, pros who put pillows up in corners and optimized speaker placement so you could get the most out of your hi-fi equipment. Contemporary A/V receivers come with little microphones you use for the box to “sweep” the room and optimize the surround output. This movie seems to delight in showing a lot of vintage electronics equipment: microcassette recorders, transcribing pedals, devices for taking down “room tone.” If you’re a maven or even vaguely curious there’s a lot of production value value to be derived here. The human story that the filmmakers want to drape over their atmosphere, though, never quite connects. 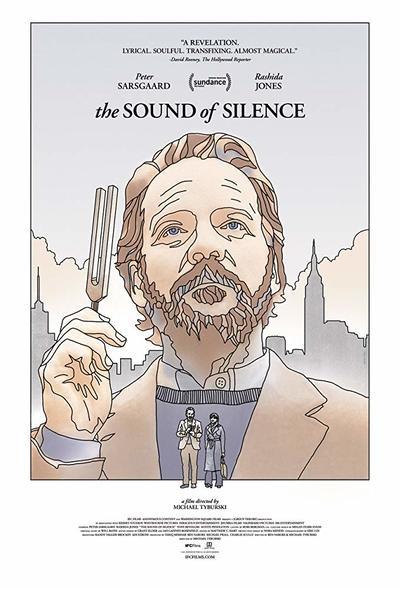