The sins of the father are visited upon his son in “The Song,” a faith-based parable that draws from the Bible as much as it does from every perils-of-showbiz cliché in the book.

The religious spin comes from the suggestion that God somehow frowns upon the pursuit of your dream if it involves coveting fame and fortune–even though you are simply bringing joy to the world by sharing the talents that presumably were bestowed upon you by the Lord in the first place.

By that definition, competing on a reality talent competition is akin to a one-way ticket to hellfire and damnation. That may explain why we haven’t heard from those last couple “American Idol” winners lately.

I am sure filmmaker Richard Ramsey, making his directing feature debut, is going for a theme more profound than that–putting family first and not selling out on your principles and that sort of thing. But his film doesn’t quite earn that type of deeper consideration, despite its belief in a higher power.

In fact, “The Song” can often be quite the grand ol’ soap opry, as unsurprising as a Tweet update that a celebrity is entering rehab. But the Mumford & Sons-style neo-folk tunes are sort of catchy, the message is more earnest than outright preachy, the scenery autumnally appropriate–much of the filming was done in rural Kentucky–and the main actors are easy enough on the eyes that you can sometimes overlook their vapid emotional outbursts.

Still, no one would blame you if you skipped this cinematic sermon and instead caught up with the new season of TV’s “Nashville,” whose racy backstage antics regularly threaten to rival those found in Sodom and Gomorrah.

Inspired by The Song of Solomon, a celebration of romantic intimacy found in the Old Testament, the film opens with this scripture quote: “I have seen everything done under the sun. All of it is meaningless, a chasing after wind.” There is a prologue from the ‘80s that shows country icon David King (King David was Solomon’s father, don’t you know) being tempted by alcohol and his flirty backup singer. The result? A broken marriage, a second wife, a lot of guilt and a baby son named Jed, who will inherit his musical abilities while growing up in the shadow of his famous pop.

The adult Jed (strapping singer/guitarist Alan Powell of the Christian band Anthem Lights) is a gifted performer stuck playing in dive bars. But his luck–and life–changes after meeting the beauteous and devout Rose (Ali Faulkner, a flaxen-haired combo of Marcia Brady and Heather Graham whose resume includes a 'Twilight' movie). His feelings for the vineyard owner’s daughter motivate him to write a lovely ditty that not only wins him her hand but turns out to be his passage to riches and international acclaim. Soon they are saying their vows in a chapel that Jed is building on her daddy’s land to honor their commitment, and a baby boy arrives in short order.

But y’all know what comes next, right? A pushy manager wants Jed, whose blue-eyed good looks suggest Robby Benson on steroids, to go on the road for months on end with his band to entertain auditoriums filled with cheering young wenches with lust in their hearts. And wouldn’t you know that his opening act features a raven-locked temptress named Shelby Bale (Caitlin Nicol-Thomas, who exhibits a Kirsten Dunst-ian kittenish allure). This siren-voiced violinist might as well have “Jezebel” stamped somewhere among her countless tattoos, because she is capital-T trouble wrapped in tight pants and flashing a leering grin from the instant she appears.

With Jed’s visits home between concert dates growing ever more strained–homebody Rose can’t join him since she must tend to her sickly father–their passion cools considerably and he soon succumbs to Shelby’s charms, not helped by the fact that they sound great performing together. And so begins the usual downward spiral into sex, drugs and (soft) rock ‘n’ roll but with picture-postcard shots filling in for such tour stops as London and Amsterdam.

However, just so we don’t think that we are watching a VH-1 "Behind the Music" episode, Ramsey has a narrator recite Bible quotes from The Book of Solomon now and then that are intended to comment on the action on screen.

At a certain point, however, I began to treat "The Song" as a kind of guilty pleasure, a not particularly good movie that nonetheless entertains in spite of itself. How can you not chuckle when a resentful Rose starts to feign sleepiness–cue big yawn–to avoid any bed time with her soon-to-be wayward husband (at least she never says she has a headache). Or when Jed’s facial scruff suddenly turns into a kind of an outward indicator of how far he has fallen as it grows from Abe Lincoln length to hipster nirvana to hillbilly moonshiner scary.

Besides, laughter–intended or not–is always good for your soul. 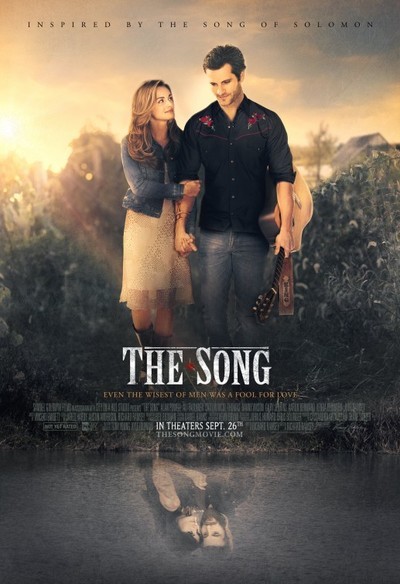 Rated PG-13 for thematic elements including some substance abuse, smoking and rude references