The frantic adults and kids in Trish Sie’s “The Sleepover” are often screaming, but that doesn't mean they’re getting anywhere. You’d think that a story about a mom's cool secret and kids breaking curfew would be a lot more fun, especially with a charismatic cast like this, and yet “The Sleepover” is mostly about killing time, specifically that of your own.

Malin Akerman plays Margot, a lunch duty volunteer at her kids’ school, and a mom with a secret past of being a master thief. She’s been in witness protection for years, something that her pastry shop owner husband Ron (Ken Marino) and kids find out when she is kidnapped at gunpoint from their Cape Cod by her former employer. With clueless Ron in tow, Margot is forced to perform one last big heist with her former partner and ex-flame, Leo (Joe Manganiello). It’s up to Clancy (Sadie Stanley) and her younger brother Kevin (Maxwell Simkins) to save their parents, with the help of their two friends: the social media-obsessed Mim (Cree Cicchino) and the uptight Lewis (Lucas Jaye).

“The Sleepover” knows how to get you to like everybody at first, because it is initially funny and charming with its characters. Kevin’s not-so-sneaky attempt at plagiarizing “The Martian” for a family history project is just as admirably goofy as his dance scene in the bathroom; Clancy wins us over by being a great cellist, but one with stage fright. And their parents are sweet too—Marino has a nice moment with Clancy in which his dorky way of parenting proves to be as sweet as the cupcakes he leaves out on the kitchen table at night.

It's the adventure itself that proves to be less than, starting with the big reveals about mom. In the process of trying to find where she went, the kids come across a whole bunch of her gadgets and costumes in a storage locker. But don’t get attached to the gizmos—maybe we’ll see them in a sequel, but “The Sleepover” isn’t about showing off anything that makes it enticing, so much as putting it all through some old tricks. An automatic-driving car is then used for a scene where the kids are screaming for the lives; the same with a laser that later blows up a couple cars in a different car-oriented, screaming scene. It's an easy family comedy trick: if a sequence is only kind of funny, just make everybody scream throughout.

You root for these kids, not just in their goals, but for them to have an adventure. The lazy plotting of "The Sleepover" gives them a mild one that consists of a lot of traveling and weak mysteries, like watching characters following a straight line that only sometimes zigs or zags. The action for the kids makes for underwhelming sequences of getting from Boston from Cape Cod, and obtaining colonial disguises along the way. The things that they learn about their mother in the process become more innocuous than they are surprising—she really loved William Butler Yeats, and she had friends and a flame before having kids. If these kids somehow had access to a helicopter, or a portal, they’d be able to shave off the time “The Sleepover” wastes in simply getting them to the big event, contrivances that would also fit in with everything else here.

And despite being forced into one last heist that involves stealing a crown, the adults aren’t given much to do either. Marino and Akerman are also warm and playful, but while they clearly have an ability to wink at the formalities of adulthood (as on Marino’s “The Bachelor” parody series “Burning Love”) once the story puts them into action, it’s tired jokes about Marino’s terrible inability to keep up a disguise, especially when it comes to a French accent. And then there’s Manganiello, another comedically gifted (remember him dressing up like Pee-wee Herman in “Pee-wee’s Big Holiday”?) who is left with repeated jokes about his muscles. Just like the wound-up performances from the kids, the adults are clearly improvising their way through the movie, and the simple volley between uptight and clumsy characters becomes innocuous.

Sie shows slightly more spark with scenes where Akerman and Manganiello do some hand-to-hand combat, but even here their lightness becomes too obvious. Margot gets a butt-kicking moment in the third act, but setting it to "I Want Candy" feels uninspired, as sugary as this movie is supposed to be. And then an attempt at a minivan chase scene through Boston only rubs in the movie's indifferent construction, with most of the action taking place in the car, emphasizing how much the action is unfolding mostly with the help of the green screen and yes, screaming actors. It’s the spark of an idea, given an execution that's strictly mild. “The Sleepover” seems comprised entirely of such moments, and you could spend far more time thinking about what is underwhelming about it than what's worthwhile. 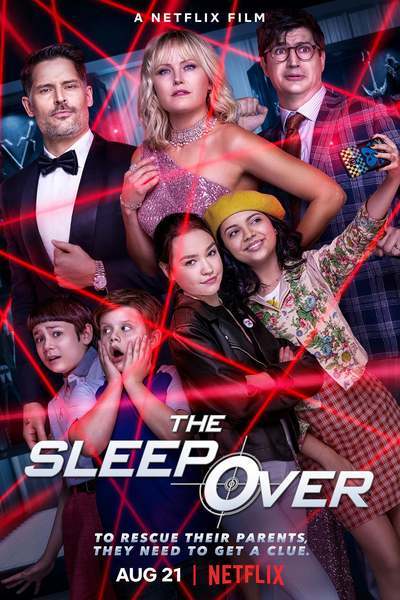