June and Jennifer Gibbons were Welsh twins born to Caribbean immigrants in the 1960s. Severely bullied and ostracized as the only Black family in the neighborhood, the two receded into each other to an extreme level. Referred to as “The Silent Twins”—the same name as Agnieszka Smoczynska’s biographical drama inspired by their story—they spoke only to each other. The film, adapted from the book by Marjorie Wallace and written by Andrea Siegel, follows June (Letitia Wright) and Jennifer (Tamara Lawrence) from their childhood to adulthood as their inordinately inward lives develop and metastasize with age.

There is a constant feeling in "The Silent Twins" of being on the edge of emotional integration with the story, but it's always left unfulfilled. Smoczynska seems to be operating on the belief that the peculiarity of their story is enough to fulfill the audience’s attention, imbuing the movie with a sense of restlessness. We are constantly waiting to be given a reason to care about the twins’ isolation, rather than simply be curious about it.

In just under two hours, “The Silent Twins” covers the lives of June and Jennifer from childhood to their late twenties, and it does so with the grace of a sputtering engine. The film hops from event to event instead of developing a coherent timeline, juggling an overwhelming litany of entries without taking the proper care to thread them together. With an overflowing amount of plot points to execute, the pacing of "The Silent Twins" suffers. Especially in its final act, Smoczynska has a lead foot in concluding the story, while trying to make up for lost time with ham-fisted sympathy and emotion.

It's beyond the power of Wright and Lawrence to save the script's pathos with their performances, and they fight to engage emotionally with a story that hardly allows them to do so. We’re confronted with many sisterly brawls, moments of reconciliation, and wordless acknowledgements, but each and every one lacks impact. The two work well with the material they’re given, though Lawrence outshines Wright both in having more character development on paper as well as better expressive range in her performance.

The film’s atmosphere deserves acknowledgement, with a beautiful cool versus warm color motif throughout and a solid soundtrack. The inner worlds of the twins are flooded with heat and light; the world around them is chilling and harsh. Oftentimes, June and Jennifer’s inner monologues are depicted through stop-motion animation and metaphorical vignettes of animals, doctors, and broken families. While this format of animation is a creative addition and clearly implemented with intent, their inclusion feels just as cursory as the live action narrative.

The effort of “The Silent Twins” to recognize the strength of the sisters’ bond of silence and their decision to take unprecedented power over their isolation ultimately feels half-baked. Their othering is inherent to their story, yet instead of dissecting it enough to provide a suitable foundation for the film’s happenings, we are only dropped into the consequences and given no more detail than that of a grocery list.

Smoczynska had incredible potential in the real-life biographical source material of June and Jennifer Gibbons, but themes of race, social development, and the strength of sisterly connection are mere whispers in “The Silent Twins.” While there's undeniable creativity in the film's visual and metaphorical aspects, there's a glaring neglect in the power needed for this film to find its own voice. 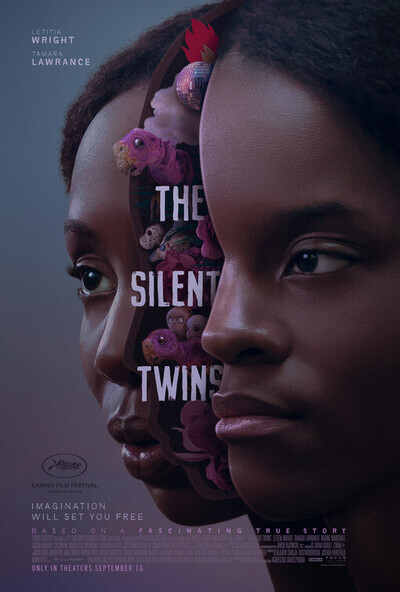 Rated R for drug use, some sexual content, nudity, language and disturbing material.

Jodhi May as Marjorie Wallace