All through the action thriller “The Serpent,” I kept thinking how much the hosts of “How Did This Get Made?” would roast the holy hell out of this if they ever got their hands on it.

I could just imagine them doing an episode (perhaps live from Largo!) and hearing Paul Scheer do his damnedest to break down what exactly happened in this movie, while an aggressively amused Jason Mantzoukas and a somewhat bemused June Diane Raphael throw in their frustrated two cents. This movie is right up their alley: it’s a start-to-finish train wreck, a laughable piece of “cinema” made by people who really have no business making movies. It’s a film that’s supposedly set in several different parts of the world—but you know it was all filmed in Los Angeles. (If you’re going to do a scene that’s set in New York, maybe don’t do it outside the Los Angeles Theater—THE NAME’S ON THE MARQUEE!) It’s one of those undeniable disasters that make you wonder if this whole production, with its heavily CGI-ed explosions, Rudy Ray Moore-ish fight scenes, chintzy-ass performances and cringeworthy dialogue, was just an excuse to launder criminally-obtained funds.

This movie is the filmmaking debut of Russian model Gia Skova, who writes, directs and stars as the main heroine. She plays Lucinda Kavsky, an agent for the CIA. And if you’re wondering how Skova pulls off playing a CIA agent with a Russian accent, don’t worry—her voice is dubbed to make her sound British, for some reason.

Anyway, she’s on the run because she knows about a plot to turn newborn babies into nuclear weapons. After all, she was the unknowing convoy to a bunch of Chinese bio-engineers and scientists, who were on a secret mission to China to implant a chip into a baby, so that kid can grow up to be a happy, healthy “bio-bomb.”

Yeah, that sounds hella ridiculous, but we just touched the tip of the stupid iceberg. For starters, this movie reveals the identity of the big bad guy who’s been pulling all the strings—the kind of Big Twist that’s usually reserved for the final act—in the first ten minutes. The film then becomes a huge flashback where we see the Serpent unknowingly aiding the Big Bad, while the Big Bad helps her not only save a kid from blowing up, but also track down all the rich psychos who hatched this plan in the first place.

At least, I think that’s how the plot goes. I mean, this thing is all over the place narrative-wise. One minute, the Serpent is sashaying into a strip bar, ready to twist the neck of some guy. The next minute, she’s working at some tony school, befriending a girl so she can get close to her dad, just so she can put a couple of bullets in him. (Apparently, she does this on the same day as the strip-bar hit, since we see the police still investigating the scene while she meets the father.)

Between the wild plot leaps (I haven’t even gotten to the Serpent going to jail for five years for killing a co-worker) and the abundance of characters popping in and out, mostly there to spew exposition (hell, the first ten minutes is an exposition dump nestled inside a car chase, which appears to mostly take place in a fenced-off parking lot), there wasn’t a single moment where I wasn’t lost.

As crazy as this sounds, attractive Russians coming to America and getting all badass isn’t even a new thing. A few years ago, the muscle-headed vehicles of bodybuilder-turned-action auteur (and member of the Hollywood Foreign Press Association) Alexander Nevsky began circulating around these parts. And those films—clearly homages to the sort of ‘80s-era actioners his hero Arnold Schwarzenegger used to do—were just as cheaply made and downright embarrassing as the debacle Skova pulls off here. If "The Serpent" proves anything, it's that Russian ladies can make lousy action movies too. 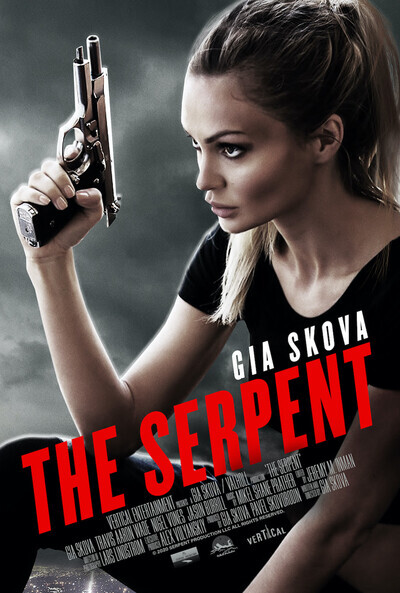