The Sense of an Ending

“The Sense of An Ending” is a decent, take-your-mom movie (or take your grandma, if you’re a lot younger than I am). It’s got a strong, esteemed British cast (Jim Broadbent, Charlotte Rampling, Harriet Walter, Michelle Dockery, Emily Mortimer.) It’s based on a Man Booker Prize-winning novel by Julian Barnes. And it’s about returning to a dramatic event from decades earlier in the hopes of finding closure.

And indeed, the screening I attended was packed with older filmgoers—a woefully underserved audience beyond the occasional "The Best Exotic Marigold Hotel” movie and the like—to the extent that the woman sitting three seats down from me kept answering her phone when it rang and having loud conversations.

Not to sound derisive, but there’s definitely a target audience here. What they’ll get will be mildly satisfying: a film that’s well-acted but tastefully restrained to a fault, with gentle humor about aging and a central mystery that isn’t all that engaging.

Maybe it works better on the page. Barnes’ 2011 novel, at just 163 pages, has been acclaimed for its elegance, precision and for the gripping nature of its unreliable narration. Director Ritesh Batra’s film, based on a script by Nick Payne, jumps back and forth in time as the pieces of a previously unexamined life snap into place. Characters and bits of dialogue from one period intriguingly appear in the other to signify the fluid nature of memory. But when you stand back and consider the truth Jim Broadbent’s character is chasing, it’s hard to understand why it matters now, after all this time.

Broadbent stars as Tony Webster, the divorced owner of what has to be the tiniest and most specific shop in all of London: a narrow storefront where he fixes and sells classic Leica cameras. Batra efficiently establishes the quiet, daily rhythms of his isolated existence: the tidy home where he brews a coffee pot for one in the morning, the park bench where he eats lunch by himself in the afternoon. This is a man who’s clearly very particular about everything but Broadbent, great as always, imbues the character’s loneliness with an awkward sweetness.

He still has a cordial relationship with his ex-wife, Margaret (Harriet Walter), and the scenes in which the two banter with a warm familiarity are the film’s finest. (“Why did you leave me?” Tony asks Margaret at one point; she rolls her eyes at him in response.) She is the voice of reason—the one connected to the outside world, a force Tony clearly still needs in his life. And the two share a strong bond with their daughter, Michelle Dockery’s matter-of-fact Susie, who’s extremely pregnant and on the verge of having her first child on her own.

The arrival of a certified letter disrupts his routine. It turns out the mother of his first love, Veronica, a vivacious young woman he met in college, has died. She has willed him an item that Veronica, whom he hasn’t seen in over 50 years, now refuses to give him. As Tony tries to track it down, he shares with Margaret the story of this young romance, as well the friendship with a fellow classmate that came to a tragic end.

“The Sense of An Ending” glides back and forth between a series of conversations between the exes, each of which ends with Margaret growing exasperated with Tony, and the events from the early ‘60s themselves, starring Billy Howle and Freya Mavor as the young Tony and Veronica. Working with cinematographer Christopher Ross, Batra shoots these flashback scenes warmly in contrast to the crisp cloudiness of contemporary London. There’s a smoky, faded quality that suggests the haziness of memory.

But the most powerful scene of all comes courtesy of Rampling, which should come as no surprise to anyone who’s familiar with the veteran actress’ work. Along those lines, “The Sense of An Ending” surely will call to mind 2015’s “45 Years,” which deservedly earned Rampling an Academy Award nomination for Best Actress. That film also followed the domestic destruction caused by a letter with news from the past. Here, in one exquisitely sad and tense moment with Broadbent at a café, Rampling provides a brief glimpse into what all the fuss is about. 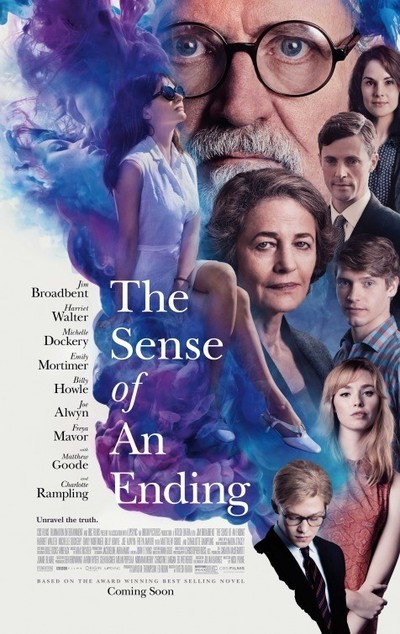