Make no mistake. “45 Years” is no polite tea-and-toast domestic drama, even if the central (and virtually only) characters onscreen are a childless retired couple, Kate and Geoff (played by the beyond-superb Charlotte Rampling and Tom Courtenay). Their marital contentment among the green pastures of the English countryside will soon be disrupted when an unexpected letter arrives a week before their wedding anniversary party.

In fact, I haven’t been this shook up by married seniors under duress as they hang out in the kitchen since “Amour.” If you prefer acting prowess over “Star Wars,” you won’t do better at year’s end than observing Rampling (she of the withering stare) and Courtenay (he of the soulful gaze), two stalwarts of that wonderful wave of British talent that hit our shores in the ‘60s, as they perform a finely calibrated pas de deux.

Considering what is contained in that missive, the situation that rocks their world is akin to when Glenn Close’s stalker in “Fatal Attraction” shockingly bursts out of the water with knife at the ready after presumably drowning in a bathtub. Initially, the news that the ice-encased body of Geoff’s German first love, Katya, who died more than 50 years ago after falling through a crack in a glacier as they hiked in the Swiss Alps, feels oddly random yet innocuous.

But filmmaker Andrew Haigh wisely puts his faith in his two leads, and allows them to reveal just how this reawakening of long-ago events, of which Kate was previously only mildly aware, is about to change their entire perspective on the present. Like any Brontë-esque, gothic yarn that attempts to build tension as a haunting presence (a sleeping beauty, no less) intrudes, the fissures in their relationship happen in small, mostly silent yet nerve-wracking increments.

While the pair resume their routines as best they can—Geoff fumbles with a broken toilet and relaxes by reading Kierkegaard, Kate walks the dog and tends to finalizing the party details—it is clear that a change has taken place. He becomes distracted and resumes his old smoking habits despite having had bypass surgery five years ago, the event that postponed their 40th anniversary celebration until now. She grows concerned when her husband begins to sneak off to the travel agent in town to find out about the possibility of going to Switzerland to view the body since he was designated next of kin.

Matters come to a head one evening when Kate and Geoff spontaneously decide to cut a rug to the oldie “Stagger Lee,” giddily twirling about their living room as if they were courting again. Geoff suddenly gets the urge to take Kate to bed. “I hope I remember what to do,” he says, indicating this is not a commonplace occurrence anymore—and they tenderly become entwined. Mid-coitus, Kate utters three words that often signal when something is amiss during movie sex: “Open your eyes.” And that is the end of that.

Or is it? Having fallen asleep, she is soon stirred by the sounds of Geoff rummaging about the attic while searching through souvenirs of his times with Katya. Kate’s dismay is evident. She knows that their house—and his mind—has become possessed by this long-dead, forever-young rival. And she will eventually do her own rummaging through a past that literally hangs over their heads.

For a seemingly simply told tale with minimal dialogue, Haigh uses a number of subtle devices to clue us in to what is really happening without resorting to cheap gimmicks. We see Kate window-shopping and she briefly considers buying a watch as a gift for her husband, yet fails to do so—as if she senses that time has suddenly holds no meaning for him. And each encounter with a mirror becomes an opportunity for hard reflection as Kate’s features reveal the mental toll. The use of space in the background underscores the growing distance between them. Even the smallest of details prove important, such as the lack of photos chronicling their own past together or how Geoff’s illness and advanced age makes him feel the burden of mortality more intensely than Kate.

But I most admire Haigh’s use of golden oldies, including era-appropriate selections picked by Kate to play during their party, that provide telling yet unobtrusive commentary. I laughed when she fills in her friend about Geoff’s behavior of late while driving in the car and then quickly clicks off the radio when Gary Puckett begins to croon, “Young girl, get out of my mind.”

These tunes especially prove invaluable during what is probably one of the best and most shattering conclusions of any film released this year—one that I have now watched several times in the past couple of months with increasing admiration for its ultimate effect on the audience. Of course, we want these two people to be happy again and, as their friends gather to toast the longevity of their union, it is hard not to hope that all might end well. Then again, any romantic couple who chooses “Smoke Gets in Your Eyes” as their special song should have listened to the lyrics a bit more closely. 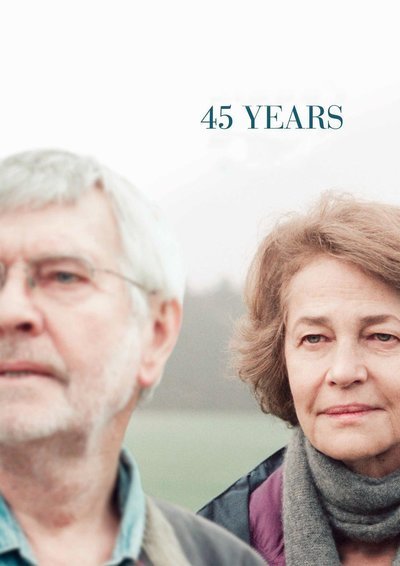