If an episode of “Dateline” were run through the Lifetime channel filter, the result would be “The Secrets She Keeps.” In its overall plot, the Australian thriller miniseries—adapted from the same-named novel by Michael Robotham, which was itself based on a true story in the UK—resembles an installment of the former long-running investigative newsmagazine. A beautiful family hit by an unspeakable tragedy; spouses lying to themselves and to each other; an entire country serving as voyeurs of betrayal. In its performances, though—in particular that of "Downton" Abbey actress Laura Carmichael, going way against type—“The Secrets She Keeps” skews toward the melodrama on which the Lifetime network was built, with extravagant reactions, venomous exchanges, and purposeful obfuscation. The combination results in a very watchable, albeit slightly shallow, exploration of how femininity and motherhood intertwine and toxify.

“The Secrets She Keeps” follows two women living in a suburb outside Sydney, Australia. Although similarly aged as 30somethings and similarly pregnant at 9 months along, Meghan (Jessica De Gouw) and Agatha (Carmichael) are otherwise quite different. Meghan is an aspiring influencer, a mommy blogger with 90,000 followers of her Mucky Kids blog. On it, she posts and vlogs about her two children with husband Jack (Michael Dorman), a TV sports reporter, and about her “oops baby pregnancy.” Jack and Meghan didn’t plan to have a third child—and her excitement far outweighs his—but by all appearances, their lives seem perfect. They live in a gorgeous home; their children are healthy; and Meghan’s blog is increasingly popular.

But this series is a thriller, after all, and so there must be flies in the soup of Meghan and Jack’s relationship. She dislikes how much time he spends with best friend Simon (Ryan Corr), who also works at the TV network. While they go out for lunch and drinks, Meghan is at home with the children, handling the majority of the domestic labor. Jack, meanwhile, has been trying for years for a promotion and raise at work, but he keeps missing out on anchor jobs; the strain of his one salary supporting a growing family is beginning to show. Meghan’s blog brings in a few hundred dollars a month, but she’s also plagued by a troll who leaves comments threatening her and her baby on every single Mucky Kids post. And the baby is another wedge in Meghan and Jack’s already askew marriage: “We need to find our intimacy again,” Meghan complains to her younger sister Grace (Cariba Heine), but she’s not sure if Jack is willing to meet her in the middle.

While Meghan and Jack struggle to keep up a flawless façade, she’s being watched. Whenever Meghan visits the grocery store, she’s trailed by store clerk Agatha, who also follows Mucky Kids. Is Agatha starstruck? She is a little overly giggly after engineering a conversation with Meghan about their pregnancies, and about their similar due dates: the first week in June. But she’s also quite prickly, pushing away an old friend, ignoring her mother’s phone calls, and dropping the pregnancy bombshell on ex-boyfriend Hayden (Michael Sheasby) after months of no contact. Agatha is erratic, Meghan is aggrieved, and the two of them are on a collision course, the terms of which “The Secrets She Keeps” heavily suggests by the end of its first episode.

For a series that is being billed as a noirish thriller, it’s slightly frustrating that “The Secrets She Keeps” doesn’t really deviate from a certain narrative that is established in its first hour; it plays things relatively straight. Writers Sarah Walker and Jonathan Gavin, each of whom pens three episodes of the series, pack each installment full of plot, with the usual soapy elements like infidelity (shown through lips-parted, against-the-wall flashbacks) and murder. Directors Catherine Millar and Jen Leacey set a solid pace, building a slow-burn tension and sprinkling in moments of jarring surprise. There’s a dark humor running throughout that is consistently amusing: a man’s self-effacing laugh when his romantic partner asks, “How many other women are pregnant with your baby?”; Meghan’s mother, irritated with her influencer affections, asking of a fruit basket gift, “What am I meant to do with a pomegranate?”; an online shopping cart full of items that practically scream, “I am planning something felonious!”

But the greatest shortcoming of “The Secrets She Keeps,” which becomes clearer with each episode, is how the series fails to progress Agatha and Meghan forward in terms of interior development. Traumatic backstories abound, including a particularly unsettling one that nods toward how often we dismiss the pain of young women. The series does explore, to a limited degree, how motherhood acts as a unifier, instilling in women an immediate trust in others who also have children. Meghan and Agatha have barely had a couple of conversations when Meghan says of Agatha’s labor, “I want all the gory details,” an assumption of sharing that Agatha is all too eager to provide. Is this all that female friendship becomes after a certain age, the series wonders: bonding over children? “The Secrets She Keeps” dares to ask whether such a connection could be meaningless instead of meaningful, and there’s a refreshingly subversive quality to that query.

Yet there is an ultimate dissatisfaction to the series that is perhaps caused by its lack of reflection for what certain choices mean for these characters. The focus on cliffhangers and subterfuge means that Agatha and Meghan become defined by one secret each, and the series doesn’t expand their personalities much past that. De Gouw and Carmichael are solid performers—the former communicating ambition as a way to mask resentment, the latter balancing frailty and ferality—but the work they do on a scene-by-scene basis increasingly feels irrelevant given where the narrative needs these characters to go. This becomes most clear in the series finale, when one of the women realizes that she’s overlooked a significant element of her personal life. “I would have known. I would have sensed it,” she insists, and the desperate tenor of her claim makes an impact. By the end of the episode, though, there’s no further mention of this self-doubt, and no indication of how the character’s behavior will be shaped by or transcend past that uncertainty. “The Secrets She Keeps” is well-acted and tightly woven, but the broader points it aspires to make about maternal desire as social capital and motherhood as performance end up overshadowed.

Whole series screened for review. “The Secrets She Keeps” premieres on AMC on April 19. 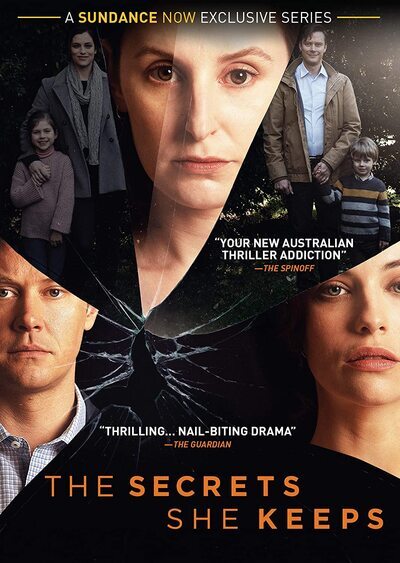