The Secret: Dare to Dream

We could all use a little hope these days. More than a little, actually. But you won’t derive much inspiration from “The Secret: Dare to Dream” besides some unintentional laughter to briefly brighten your day.

Based on the 2006 self-help book from Rhonda Byrne, which has sold tens of millions of copies with the help of Oprah Winfrey’s blessing, this romantic drama is filled with vapid platitudes about the power of positive thinking. Director and co-writer Andy Tennant’s film takes place in a generically quaint small town full of blandly nice people who are woefully devoid of characterization, even though they’re frequently stuck standing around explaining themselves to each other. Even something as potentially thrilling as an approaching hurricane can’t liven things up.

There is nothing new, exciting or particularly challenging about what “The Secret: Dare to Dream” is selling. You’d be forgiven for thinking you’d seen this movie before, as it hews so closely to the kind of comforting fare airing 24/7 on the Hallmark Channel. It’s also Nicholas Sparks-adjacent, with Madisonville, Louisiana, on the banks of Lake Pontchartrain standing in for North Carolina. This is the kind of place where the sun always sets just perfectly, the misty rays of light streaking through the dangling moss, and characters with names like Tuck and Bray wear puffy vests and button-down shirts with elbow patches.

Within this seemingly idyllic setting, Katie Holmes’ Miranda Wells is buried under massive stress and debt. A widowed single mom of three kids managing a New Orleans seafood restaurant, she’s too broke to afford simple pleasures like pizza, so fixing the leaky roof is clearly out of the question. She’s also half-heartedly dating her boss, the blithely wealthy Tuck Middendorf (Jerry O’Connell), which is more of a source of pressure than joy.

Magically, Josh Lucas’ Bray Johnson arrives, carrying a manila envelope with a red wax seal which must mean that it’s very important. (It also happens to be the logo of “The Secret.”) The handsome professor has traveled from Nashville to bring some life-changing information to Miranda, but ends up getting distracted when they meet cute during a fender bender. Not only does he cheerily repair her front bumper, he also patches up the roof on her house when the hurricane sends a tree crashing through her kitchen.

Too good to be true? But wait, there’s more! Along the way, the irrepressibly upbeat Bray insinuates himself with the entire family by offering pithy tidbits of wisdom to each of them. He begins by explaining the law of attraction with a magnet and a paper clip: “The more you think about something, the more you draw it to you,” he insists. So when Miranda’s tween son Greg (Aidan Pierce Brennan) rhapsodizes over the aforementioned pizza, a delivery man arrives with the exact kind he wanted. When sullen eldest child Missy (Sarah Hoffmeister) laments that no one’s coming to her 16th birthday, Bray easily convinces her that having only a few real friends matters. And when Bessie (Chloe Lee), the youngest, longs for a pony … well, you can imagine what happens.

“My whole life is like that gut feeling that something really bad is going to happen. And then … it does,” Miranda confides in him. “You know, things don’t have to be a series of unfortunate events,” Bray responds before popping over to the lumber yard to pick up some two-by-fours and a blower to dry the floors—which naturally will be right there waiting for him because he needs them, despite the fact that a hurricane has just blown through town.

This overly simplistic philosophy might seem borderline dangerous in these difficult times if it weren’t presented in such silly, predictable fashion. (Rom-com veteran Tennant co-wrote the script with Rick Parks and Bekah Brunstetter.) Got Covid? Just wish it away. Lost your job because of the pandemic like tens of millions of other Americans? If you want your dream gig badly enough, it’ll magically happen. Can’t pay the rent? Money will show up in your bank account if you put it on your vision board. In a place where birds chirp pleasantly and twinkly piano music accompanies the most banal of errands, anything is possible.

But wait, there has to be conflict somewhere, and it arrives in melodramatic form in the third act. This is one of those movies where everything would be resolved quickly if the two main characters had a basic conversation at the outset; because they don’t, Bray’s true identity and purpose emerge in front of a crowd during a happy occasion, as they are wont to do.

Holmes and Lucas give earnest performances and do the best they can with such flimsy material, but they have zero chemistry with each other. There’s just so little to these characters for them to work with. But at one point, I said out loud to myself in an empty room: “Oh my god, are they really going to kiss in a Waffle House parking lot?” And for one glorious, shining moment, I manifested my own happiness. 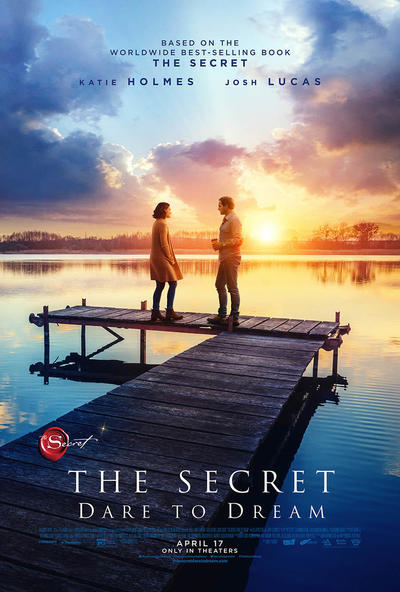