The Taiwanese horror movie “The Sadness” is both conceptually exhausting and viscerally upsetting—an ideal summer movie for the third year of the ongoing COVID-19 pandemic. Genre fans in particular might appreciate this apocalyptic thriller, which takes place at the start of a zombie-like viral outbreak, as a practical and visual effects showcase. Writer/director/editor Rob Jabbaz, a Canadian filmmaker working in Taiwan, establishes a bleak, panic-fueled mood thanks to his unsettling focus on realistic visual effects, which he and Logan Sprangers share a creative credit on, and icky makeup effects, from the team at IF SFX Art Maker.

Even more impressive, the rest of this constantly violent movie is about as mean as it is nasty. Jabbaz’s basic-but-propulsive chase narrative doesn’t really concern the representative evil of people, as groups, but rather people as universally flawed individuals. The infected monsters in “The Sadness” not only run, curse, and verbally threaten everyone else—their violence also inadvertently highlights the ugly, amoral nature of various fight or flight responses.

Like a lot of disaster movies, “The Sadness” only superficially concerns the reunification of two lovers: Jim (Berant Zhu) and Kat (Regina Lei) try to get back together after a spike in the mysterious Alvin virus separates them and also compels various infected victims to commit random acts of murder, torture, and sexual assault. The infected live to make everyone else suffer, which can be pretty overwhelming (for viewers) given that the infected are instantly compelled to hurt or be hurt by others.

The black-eyed monsters in “The Sadness” also bring out the worst in everybody around them, even the Samaritans and fellow victims we might want to root for. The Alvin virus does not, in that sense, have a distinct character, but rather a general destabilizing effect. For example: Kat is pursued by a nameless businessman (Tzu-Chiang Wang) who, before he becomes an axe-wielding monster, tries to chat her up on the subway (very much against her wishes). Most of the other Alvin virus victims serve as interchangeable threats. Because while the Alvin virus mutates humanity, it doesn’t really transform us: they’re all ugly because everybody in “The Sadness” has a moment or two of unsettling, character-testing weakness.

Jabbaz’s movie would probably be rather tedious if he and his co-creators weren’t so good at contriving excuses to be gross. They’re keen rug-pullers and the zombie-like violence in “The Sadness” often works despite its penchant for macabre elbow-ribbing macabre humor. Zombie fans may note similarities between the depraved mutants in “The Sadness” and the equally vicious cannibals in Crossed, a blood-soaked and confrontationally ugly comic series (and acknowledged influence) that follows a plague of dystopian blood-letting. In both cases, the monsters seem to know what they’re doing, because they can not only run and move at human speeds, but also verbally taunt their victims. One character in “The Sadness” points out that the infected need to get off on their victims’ suffering, which explains why they don’t attack each other.

The horned-up blood-letting in “The Sadness” seems designed to challenge viewers’ sensitivities, like the vampiric crisis in David Cronenberg’s early button-pusher “Shivers” or the gut-munching siege on the Monroeville Mall in George Romero’s classic “Dawn of the Dead.” Sometimes, “The Sadness” appears so calculated as to have been made with the express purpose of topping those previous movies. But what puts Jabbaz’s movie over the top is the sheer thoroughness of its execution and conception. There are a couple of key scenes that are both immediately repellent and intellectually disarming because of their ruthless misanthropy.

After a while, one should expect nasty things from the various supporting characters that Kat and Jim meet, even the ones who seem relatively benign despite their glaring eccentricities and character flaws. I wish I could say I was able to out-think or stay ahead of this movie’s schematic plot, but I was often so overwhelmed that I couldn’t think far enough ahead to anticipate each successive rug pull.

I’ve kept the details of the plot to a minimum in this review since much of your response to this movie will depend on how you feel about the characters’ defining behavior. I also feel needlessly over-protective about “The Sadness.” Watching it reminded me of watching horror movies when I was a teenager, when horror violence felt like a shocking protest against humanity’s degenerative complacence. Jabbaz’s movie isn’t exactly deep, but it does effectively channel his free-floating anxieties in ways both excessive and appropriately nasty. I don’t know how he or his collaborators will top “The Sadness,” but I look forward to seeing them try. 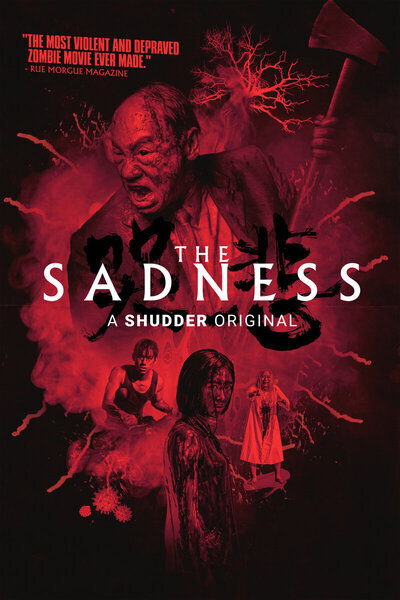