Doubt is the only certain thing in “The Righteous,” an existential psychodrama about faith, guilt and the ways in which the two notions feed off one another. Meandering around complex spiritual inklings more than it makes a coherent statement out of them, "The Righteous" manages to impress with its curious demeanor even when its overwrought ideas don’t add up to an articulate whole in the aftermath.

Still, there is much to gain cinematically from “The Righteous,” an assured debut from Mark O'Brien. The multi-hyphenate actor-turned-filmmaker bursts out of the gate with much skill to spare, and polishes his low-budget excursion with visual finesse. Shot in gleaming black and white by cinematographer Scott McClellan through a visual tapestry of crisp light beams and murky shadows that splits the difference between Ingmar Bergman and Michael Haneke, “The Righteous” tiptoes on a path that explores what happens to faith in the face of shame, remorse and most of all, existential dread.

This is a frightening film, but not in the traditional sense. It would perhaps be more appropriate to call it an angst-ridden mood piece, aided and amplified by Andrew Staniland’s imposing score of heavy strings and alarming crescendos. The story at the center earns that disquieting temperament as we begin following Frederic (Henry Czerny of “Mission: Impossible,” giving a subtle performance seeped in sorrow), an ex-priest now shattered by grief and misgivings about his faith upon losing his adopted daughter to a mysterious tragedy. Still, Frederic and his wife Ethel (Mimi Kuzyk, powerful) try to get by, holding onto what little comfort that they may have.

The film’s best scene arrives early when Doris (Kate Corbett, stealing the film through her brief scenes) from their remote town makes an unannounced appearance at the couple’s home. Immediately, she feels straight out of a Mike Leigh film—call her Lesley Manville’s Mary in “Another Year” if you will—a struggling soul that compensates for her sense of powerlessness by overtalking, by overexplaining herself. Through her shivering conversations with the couple, we get a little backstory about these characters. She is perhaps the mother of the late child. And perhaps, there is more history there, chipping away at Frederic’s already burdened conscience.

All hell breaks loose (though, quietly), when an enigmatic young man named Aaron (superbly played by O’Brien himself) turns up at Frederic and Ethel’s doorstep, groaning about his injured foot. Since it’s the decent thing to do, the two salt-of-the-earth grievers of high morals invite him in (Frederic being the more enthusiastically hospitable one), not knowing what kind of movie that they are in here. If that’s even his real name, Aaron seems grateful at first, but his increasingly flippant attitude starts to slowly get to Frederic. Why is he behaving so entitled, putting his feet up on the kitchen table, snooping around the couple’s home, going through their private stuff like the leaflet about their recently deceased daughter’s funeral arrangements?

Most of the film then unfolds around weighty conversations between Aaron and Frederic, slowly revealing that the young man might not be what he seems. What if he’s a figment of Frederic’s imagination? Or worse, his sinful past in human form whose presence Ethel comes to enjoy for cryptic reasons? The old man battles with the flesh-and-blood demon all the same, unsure of whether he should disregard it in agony or embrace and eradicate it in accordance with Aaron’s inexplicable wishes. That dilemma is perhaps the most worthwhile quandary amid the oblique ambitions of “The Righteous” where uncertainty is the only constant. Through its questioning of god’s all-encompassing benevolence, O'Brien's experimental chamber piece aims to confront believers and non-believers alike. 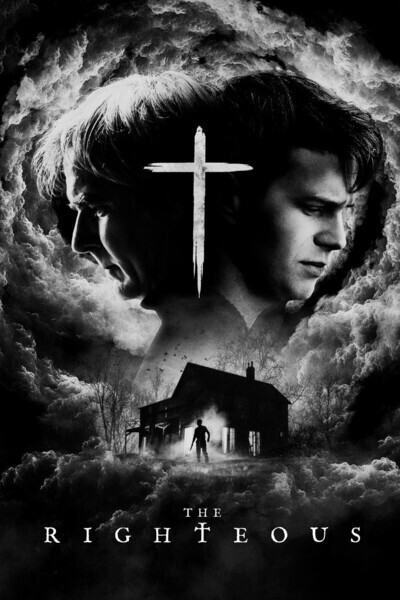