Handsome young people are doomed to pursue the wrong kind of love in “The Real Thing,” a 232-minute Japanese drama about an idealistic, but self-destructive young man who deliberately obsesses over all the wrong relationships. At least, that’s how salaryman Tsuji (Win Morisaki) and his actions are presented throughout writer/director Koji Fukada (“Harmonium,” “A Girl Missing”) and co-writer Shintaro Mitani’s stifling adaptation of Mochiru Hoshisato’s manga.

Tsuji’s love for the mysterious and disastrously messy Ukiyo (Kaho Tsuchimura) is a problem to be reckoned with since it even affects his other romances with brash co-worker Minako (Akari Fukunaga) and the relatively unadventurous Ms. Hosokawa (Kei Ishibashi).

Tsuji is sometimes warned—and also sometimes wonders aloud—about what will happen if he continues to pursue Ukiyo, a timid, emotionally unstable woman who is often in debt, homeless, and suicidal. So it’s no wonder that Tsuji’s story is the worst kind of moral tale: Fukada and Mitani treat their stillborn protagonists like victims of their own cyclical self-abuse, and then suggest that this supposedly representative behavior is a product of a certain time, age, and environment. Yeah, right.

And that “serious s**t” that Tadashi hints at is Tsuji’s Hell on Earth, a miserable series of aimless crises that he barrels through because he wants to do the right thing, but also has a hearty masochistic streak and zero impulse control. Tsuji dutifully cleans up after Ukiyo and yearns for a relationship with her that she’s either not ready or capable of. Because again, her character is what it is, and so is his. Everything is grey and/or shot with natural light in this movie, and everyone talks like this: “Once you do [make love to her], you'll go to hell." Save yourselves; unlike the filmmakers, I know you can.

Maybe it’s because I’ve not read Hoshisato’s source comic, but based on “The Real Thing,” I’m having a hard time appreciating such a pretentious wallow. And it is pretentious: Ukiyo’s often reduced to her inability to break away from her bad habits, just like Tsuji. Which I guess means that they’re mutually hopeless. Except there’s nothing mutual about it, because Tsuji uses Hosokawa, too—"Even now, you can't say it. You won't tell me you love me."—and Minako, to whom he says: “Since the beginning, I've never had feelings for you."

Tsuji and his lovers cling to each other despite themselves, because works sucks—"Say what's on the script. Do what you're told. You're not more than a mascot. No need to think."—and because financial insecurity rules everything around Tsuji, even the way he and many others talk about love: "There's a price to pay for lukewarm love." So characters go through the motions of bad decisions, abandoning and supporting each other on a whim. They accuse each other of being obviously cruel and manipulative, and you know what, they’ve got a point. Not a good point, but still.

Grey buildings, grey clothes, grey love, just one thing after another. Is living this poorly Tsuji’s way of rebelling against the economy, women, et cetera? Obviously, since Tsuji’s sometimes shown to be the same kind of stubborn at work and at home. He goes out of his way to test and report on his company’s products—fireworks and children’s toys—and spearheads a group project to pick up the slack for an unproductive colleague.

There’s unfortunately not much room to analyze Tsuji’s character in this sort of scenario since his actions are generally treated like circumstantial evidence with which we must judge him. Is he acting out of self-interest, or can he genuinely not help himself? Is he in love with Ukiyo, or just the idea (and then the ritual) of saving her? Is any of this meaningful, or is Tsuji right to pout that “destiny is bulls**t”?

I have my answer: there are a lot of fragmentary ideas in “The Real Thing,” but they’re not cohesive or worthwhile as they’re loosely formed into one grey 232-minute lump. Tsuji’s generational malaise is often conflated with his boundless narcissism, so it’s not surprising that all of his romantic conquests are two-dimensional mirrors for his non-existent self. He is as empty as Ukiyo fears she is, and that’s kind of sad. “The Real Thing” is very much what it’s about, and that’s unfortunate.

Now playing in virtual cinemas and available on VOD and digital platforms. 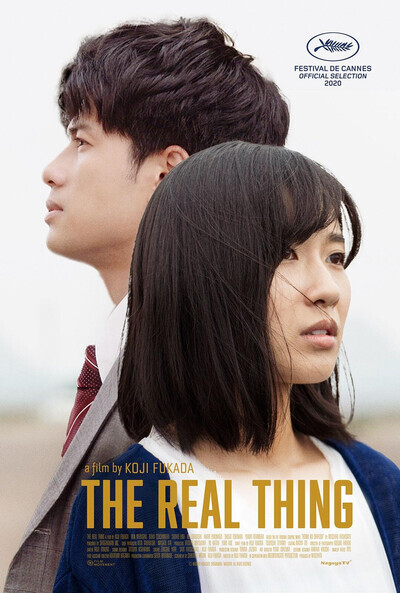