Keith Richards said, of the mayhem that was the Rolling Stones early years, "If I want to know what I did in those years, I have to ask Bill Wyman." Wyman, born Bill Perks Jr., is a compulsive collector, an archivist, really. He keeps everything, tour posters, ticket stubs, photos, memorabilia, "home" movies of the Stones, all of it carefully labeled and placed in well-organized wooden filing cabinets. He joined the Stones in 1962 and walked away after the 1989-'90 tour, remaining somewhat estranged from the other band members. In 2014, Wyman opened up his enormous archive to filmmaker Oliver Murray, and "The Quiet One" is the result.

Bill Perks Jr. grew up rough in the slums of South London, and he speaks a lot about what that meant to him, in his voiceover which pulls the film along. Not until the very end of "The Quiet One" does Wyman appear in full, talking to the camera. Nobody interviewed is shown in "talking head" format. They are identified only by their names onscreen. Throughout, Wyman is shown from behind, sitting at the desk in his archive, head bent over his work, the camera gliding through the shelves, providing just glimpses of him. The film is a collection of voices, accompanied by all this new footage, Super 8 footage, tape recordings and home movies and Wyman's tour diaries, etc. (Unfortunately, this style doesn't highlight the actual footage as much as it should. It's all put together in fragmented montage form, making the footage look like every other hodgepodge montage in contemporary documentaries.)

Wyman was not expected by his parents or anyone else to rise above his origins. His earliest memories are from the Blitz in World War II, climbing through the rubble. (As Stones drummer Charlie Watts observed, "He was locked into an era that came before us.") He served in the Army and discovered rock 'n roll via AFN (American Forces Network) radio. Wyman remembers hearing Chuck Berry for the first time and "the hair went up on the back of my neck. It blew me away." Wyman learned to play the bass by listening to the bass line on "Green Onions" by Booker T. and the M.G.'s. Eventually, he interviewed for a spot with a new band called The Rolling Stones, who were going to play the blues, almost unheard-of in England at that time, and not seen as commercial at all. Perks changed his name to Wyman, a final break with his past.

Bill Wyman, despite his reputation as the biggest womanizer in the band (think about that for a second), was known as "the quiet one" (he referred to himself once as "the silent Stone"), the guy who wore dark sunglasses in group interviews and didn't say much, but when he did, he said things like, "I'm not a musician. I'm in a band." Some of this footage has never been seen before, and there's some really captivating stuff. If you're a Stones fan, there isn't much to learn here (the band's history is so well-known at this point it's like something taught in grade schools across the land). So much of his footage is shot out of moving vehicles, showing just how peripatetic their lives were. Always on the move, go, go, go. There's the time when they all had to go live in France, and Wyman befriended Marc Chagall. Wyman was always a little bit separated from the "crazy" that was the Stones. He didn't do drugs. There's extraordinary footage of playing with Howlin' Wolf, of Brian Jones, of Altamont ("I don't really like to talk about Altamont"), along with more meditative shots: soap bubbles refracting the light, tree tops waving with lens flares from the sun, flowers, people.

His wife, Suzanne Accosta, says one of the most revealing things in "The Quiet One": "Time is [Wyman's] foundation and he wants to use all his time in a productive way." His archive is not just about nostalgia. It's about the passage of time; it's about the capturing of time. Anyone who keeps a journal, or saves photos, or hoards collections of objects knows that these activities are, to some degree, about the anxiety of living in time, of time passing so quickly it's all over before you know it. When Wyman shares the memory of meeting his favorite performer, Ray Charles, a man he reveres, he gets so emotional he can't go on. It's like it happened yesterday. Trying to capture a moment like that, hold it, pin it down, is the purpose of his archive. "It's a bizarre life I've had," he says in a tone of wonder.

"The Quiet One" is Wyman's journey, and because of that the documentary is intimate and personal, but by the same token it is also highly selective in what it shows and acknowledges. While this makes sense (Murray needed access to the archive—and Wyman—to continue with the project), it leads to a glaring omission. You'd have to remember the 1989 tabloid frenzy of Wyman's short-lived second marriage to his 18-year-old girlfriend (the "relationship" started when she was 14) to know how much the film withholds. The marriage gets just a brief mention. (This is similar to Scorsese's otherwise-wonderful "George Harrison: Living in the Material World" making no mention whatsoever of the plagiarism lawsuit Harrison was embroiled in for 10 years.) Wyman has been married to Accosta since 1993, and the couple have three children. They seem happy. But omitting the scandal of his second marriage doesn't sit well. 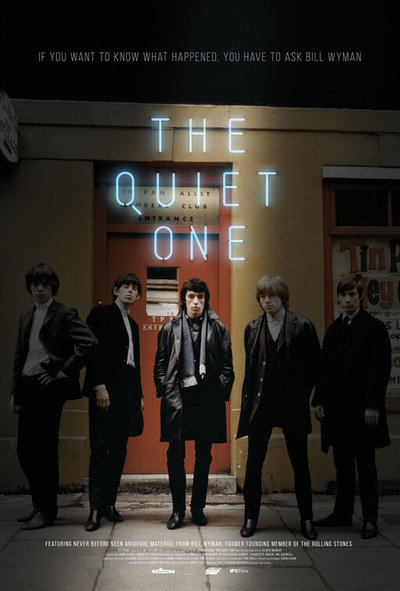 Bill Wyman as Himself

Brian Jones as Himself

Mick Jagger as Himself

Keith Richards as Himself

Charlie Watts as Himself

Ronnie Wood as Himself

Mick Taylor as Himself