Writer/director/star Emilio Estevez has some things to say and he wants to make absolutely sure that no one misses the point, starting with the title. “The Public” refers both to the Cincinnati public library where most of the story takes place and to the larger public, the individuals and the idea of the public good or the public interest. And Estevez plays the main character, a librarian named Stuart Goodson. Most people do not know that Stuart means “household guardian.” But everyone knows that Goodson means “good son.” Subtlety is not what Estevez is going for here.

Goodson works in a large public library that is a refuge for dozens of homeless people, some mentally ill, who wait outside every morning until it opens and then rush in to use the bathrooms. They spend the day there because the library is the one place people can stay without having to spend money. Sometimes they are disruptive, as when one man takes off all his clothes and starts singing “I Can See Clearly Now,” or when another’s pungent odor is so powerful that it disturbs other patrons. But mostly, they sit quietly, looking at books or using the computers.

As the movie opens, the city is experiencing a severe cold snap that has filled all the shelters and two homeless people have already died from exposure. One night, dozens of the library’s homeless regulars decide to stay past closing time. Goodson decides to side with them.

It quickly becomes a standoff, with police, politicians—including opposing mayoral candidates—and media, in this case represented by just one ambitious local news reporter.

Estevez showed us with the underrated “Bobby” that he has a talent for balancing multi-character stories, but this time as a writer he has stacked the deck with exaggerated, thinly conceived characters. Even gifted actors like Alec Baldwin, as a sympathetic police negotiator, Jena Malone as an idealistic young librarian, Taylor Schilling as Goodson’s neighbor, Jeffrey Wright as the library’s director, Christian Slater as the political candidate, and Gabrielle Union as the newscaster, cannot bring much life to characters who are each given about one and a half attributes to create an entire personality.

Those attributes are extreme, selected more to make a point than to tell a human story. So, a candidate thinks that a SWAT team-style intervention to get the homeless people out of the library will help his campaign. The reporter is more interested in trending on Twitter than getting the facts. The young librarian is self-righteous about her carbon footprint but may not be so public-spirited about the issues happening in front of her.

Estevez does little to create characters among the homeless occupiers, which is a particular shortcoming in a movie that is trying so hard to make us see them as people. Like the Smurfs, each one has a single identifier. One thinks his eyes shoot laser beams. One compulsively recites trivia. Michael Kenneth Williams, as the de facto leader of the homeless comes the closest to creating a fully realized character who is a person, not just a point. Estevez is a fine actor, but the part of the saintly Goodson, even with some trouble in his past, does not give him much to work with. It was also a mistake for Estevez the writer to give Estevez the actor all the best lines.

The film is often entertaining, with some nice touches and compelling moments. We see a string of all-too-believable questions from library patrons: asking the librarian to find a book even though he has forgotten the author and title but remembers it was red and on a top shelf, a deaf patron who asks his question about the Noble Truths in ASL, and a woman who wants to see a globe of the earth—life size. The homeless men talk about their many arrests for trivial or non-existent crimes. But its presentation of real, painful issues is too simplistic and its approach too preachy. “The library is the last bastion of true democracy,” one character tells us. The movie would be better if it showed us, instead. 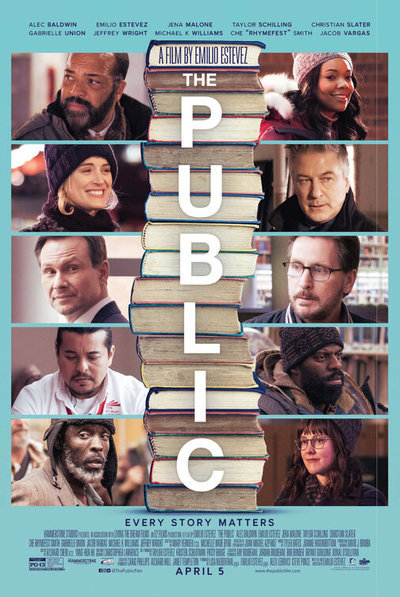