“The Professor,” previously titled “Richard Says Goodbye,” presents Johnny Depp ambling through a tough question: What would you do if your end was near? His dying professor Richard opts to largely reject the life twist of a stage-four lung cancer diagnosis, and only tell one colleague. Everyone else thinks he’s having a meltdown: abandoning his English class syllabus, smoking pot with his students on campus grounds, having sex with a random waitress. Call it “Bad Cancer Patient.”

But the opportunity to gleam some life wisdom from someone truly not giving a you-know-what is lost in writer/director Wayne Roberts’ script, which is more subservient to feel-good cliches than its too-cool-for-school veneer indicates. The story peaks in the beginning, during the opening credits, showing Richard trying to resume life while milling about his upscale New England university campus. He’s seen mumbling, and then screaming, the same sentiment—“F**k.” With Depp and his irascible presence, it says quite a bit. Richard then wades into a dirty pond and doesn’t look back, a type of apathy that starts off the rest of his inner journey. As the story goes on, Richard has more words to share about his experience, especially as he comes around to the finite nature of mortality, but they leave so much more wit to be desired.

There’s promise in the concept—Depp has often fulfilled my favorite description of him, "a stoner who got lucky," and this fits like a finale for that persona, a stoner who's now very unlucky. And Roberts, working with cinematographer Tim Orr, creates these quaint spaces for Richard's life roles—his upper middle-class dining room, the antiquated university, a friendly local bar—priming these spaces with Wes Anderson-like center framing so that Depp can come in and disrupt them. But it’s what in these set-pieces that makes the film disappointing—hollow emotions and character arcs that go nowhere, including Rosemarie DeWitt as the wife he grows closer to after they both acknowledge they'd rather sleep with other people, but stay together for their daughter, Taylor (Kaitlyn Bernard). Even worse, Roberts can't make Richard funny—abrupt comedy beats, involving Richard saying or doing something supposedly abrasive, always fall flat.

Take Richard’s “Dead Poets Society”-esque classroom: Fulfilling a dream held by I’m sure many instructors like him, he kicks a lot of kids out. Those who don’t read books in their spare time, who want to enter business, who are wearing sweatpants. But that development slowly makes him a parody of an alternative professor, the way he doesn't hide his disdain toward a couple of students who stick around, or uses his aggressive malaise as a type of lesson while his students sit around him. Peripheral characters are flattened here too, like Zoey Deutch as one of his students. She becomes an unlikely friend for him to briefly lean on in the story, but is relegated to just another student who hears his sappy advice—“In each moment we are composing the stories of our lives." By the time Richard gets to his grandiose concluding statement, "Seize your f**king existence, folks," he’s lost us.

Depp is charismatic enough in the film, or at least he seems right at home playing this anti-establishment, elegantly disheveled pseudo-rock star, always slurring his words and gradually revealing the sadness behind his ambivalence. But as the story becomes more obvious than it already looks, the light amusement of watching Richard reject his life roles runs dry, and his trash attitude toward women (ripping on a feminist student, forcefully kissing the university chancellor's wife) becomes pathetic and tiresome. And when Richard's face gets more sunken and grey, with Depp looking like he's on the express train to either death's door or a Golden Globe nomination, no character seems to notice, like a bad joke on the movie itself.

There’s nothing wrong with a little cheese in a message about life, it’s just that with "The Professor" there's nothing more to it. Roberts' film doesn’t bind Richard’s initially rebellious apathy and later heartfelt declarations with nuance, instead letting both life attitudes be plain, leading to a just barely liberating first and second act, and a dreadful third. It’s just too easy to imagine that Richard would not be moved to tears by this story about his life. Instead, he’d probably just roll his eyes. 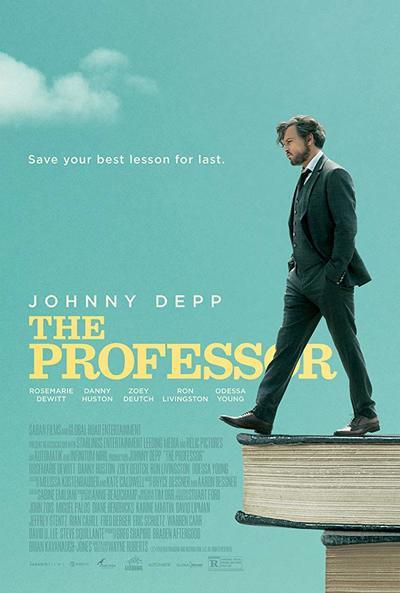