Zoe Kazan breathes fresh, exciting life into a tried-and-true high concept, playing opposite herself as twentysomething identical twins in "The Pretty One." Actually, if we stop and count, she's playing four incarnations of the same couple of characters.

We first see her as the frumpy but sweetly naïve Laurel, who never left her family's rural California home. She stuck around after her mother's death to look after her melancholy father (John Carroll Lynch), even creepily going so far as to wear her mom's old-fashioned dresses. Kazan also plays Laurel's twin sister, Audrey, the stylish and sophisticated "pretty one" of the film's title. Audrey took off long ago, lives in the city and works at a boutique real estate agency.

But eventually a twist of fate occurs, and Kazan also ends up playing Laurel pretending to be Audrey, in a sort of heightened version of the vapid party girl's personality. And ultimately, she plays the best version of Laurel as herself; she's blossomed, she's radiant, but she's maintained her core sense of decency.

It's a lot to ask of one actress and it's a tricky feat to pull off; Kazan, with her bitty voice and big eyes, manages both the girlishness and the confidence of the Laurel/Audrey conundrum charmingly.

Writer-director Jenee LaMarque also tries to pull off a tricky feat by melding several different tones in this part romantic comedy/part coming-of-age drama. While she doesn't always hit the mark exactly, she at least shows great ambition, and she draws some lovely moments from her actors.

It's the twins' birthday at the film's start. Laurel has just lost her virginity, finally, and is enjoying a newfound rush of womanhood—that is, until Audrey swoops in and steals the spotlight, as usual, at their shared celebration. (The visual effects when Kazan is playing opposite herself are pretty seamless. They're also a great reminder of what a big difference a little eyeliner can make.)

Later, when the sisters are on their way back home from a trip into town, they get into a major accident in the family pickup truck that leaves Audrey dead and Laurel in the hospital with temporary amnesia. (Not a spoiler, folks—this happens pretty early.) Yes, this is a plot device, as is the fact that Laurel just got a sleek haircut which happens to make her look exactly like Audrey. (As is the fact that they were such strikingly polar opposites to begin with, come to think of it.)

Their resemblance is so great that the doctors and nurses believe Laurel's the one who died and Audrey's the one who lived. Even their own grieving father is fooled, and Laurel is just mixed up enough that at first even she's not sure who she is.

After Laurel undergoes the surreal experience of attending her own funeral—where she hears barely a kind word about herself in eulogy—she decides to take over Audrey's life, move into her apartment and assume her work responsibilities. She doesn't know that Audrey's life included a married boyfriend (Ron Livingston in a half-baked subplot) and a slacker tenant in the other half of her duplex (Jake Johnson). Naturally, since Audrey hated the slacker, Laurel hits it off with him instantly.

From this ghoulish premise, LaMarque tries to wrest something light and lovely. The scenes between Kazan and Johnson feature an effortless kind of banter; between this and "Drinking Buddies", Johnson is increasingly revealing himself as an adorably sardonic romantic lead. And Kazan continues to assert her versatility and her intriguing screen presence, a mix of twee hipster and Kewpie-doll silent film star.

So you wish the material were more consistent for these two. Some moments are screechy, others aren't deeply emotional enough. The in-between moments in which LaMarque hits just the right note can be charming, though, and they promise better things to come. 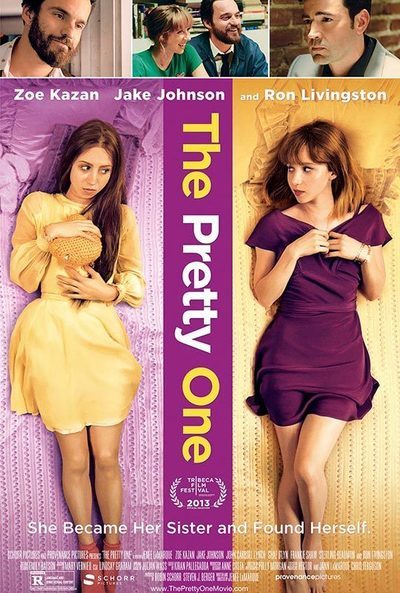