Watching "Drinking Buddies" is like being the designated driver for a most uninteresting bunch of drinkers. Part of the fun of being the DD, at least for me, is watching your charges make asses of themselves while influenced by what the Baptists called "that Devil's Brew." The characters in "Drinking Buddies" are no fun at all; they're a bunch of whiny, passive-aggressive, unconvincingly drawn, unkempt-looking clichés. They ramble incessantly, because this film is "completely improvised," and fail to involve us in this "drama." I put quotes around that word because, in order to be credited as a drama, a film has to be dramatic. This looks like a string of screen tests and home movie outtakes of the actors getting hammered on set. It's "Grown Ups 2" for the art house crowd.

"Drinking Buddies" squanders a rich opportunity to present the world of beer-making. It ignores the process completely. The main characters, Luke (Jake Johnson) and Kate (Olivia Wilde) work in a Chicago brewery. Kate is the brewery's sole female employee, but little is done with this goldmine of a detail. Luke is her best buddy, possibly a former friend with benefits, who carries a torch for Kate despite being involved with Jill (Anna Kendrick). Kate's job is administrative; Luke's job is walking around the brewery barefoot while looking like the MGM lion after a night in a crack house.

Despite having access to all the free beer they can imbibe, Kate, Luke and the other male brewery workers go out to bars to drink, play pool and ramble on incessantly about things that hold no interest for the viewer. The price of a movie ticket will buy you a couple of beers. Wouldn't you rather be drinking them than watching "realistic" depictions of people drinking them?

But I digress. Luke and Jill team up with Kate and her significant other, Chris (Ron Livingston) to spend the weekend at Chris's lake house. The poster and trailer for "Drinking Buddies" imply that this situation will lead to some Bob and Carol, Ted and Alice style sexual shenanigans, but this is untrue; it takes up a very small part of the film. While on a nature hike, Jill kisses Chris, a believable scenario rendered unbelievable by the way it's depicted. Later, Luke ruins that "the director is showing real life" argument when he says no to Kate's half-naked request to go skinny-dipping. When Olivia Wilde asks you to go skinny-dipping, YOU GO.

After the weekend, Chris dumps Kate, who responds by going out with her male co-workers and getting lewd, screwed and tattooed. Meanwhile, Luke and Jill have the strangest sounding conversations about whether to get married. Listening to them, and to everyone else in "Drinking Buddies" highlights why the film is so bad: These actors do not know how to improvise dialogue. For this to work, you have to either sound like a human being or a stereotypical movie character. Everyone here sounds like they're new to speaking English. In a comedy, this is a horrible idea. To prove my point: If you do see "Drinking Buddies," compare Wilde's "dialogue" with that of a seasoned comedy vet like Jason Sudeikis, who plays Kate's boss at the brewery.

"Drinking Buddies" really tests viewer patience once Jill goes to Costa Rica, leaving Luke to pursue rumpy-pumpy with Kate. Their scenes together become intolerable, with Luke doing the kind of passive-aggressive dance no man would do, and Kate being coy about it all. They talk and talk and oh God please bust my eardrums. We're also treated to an interminable passage of Luke helping Kate move, though that at least has some gore and the film's director (in a cameo appearance) getting punched in the face.

The inclusion of stars of note actually makes the Swanberg formula worse. Unknown actors would have kept me from making comparisons to Wilde's acting on "House" or Livingston's turn in one of my favorite movies, "Office Space." I acknowledge that I'm no fan of this genre, but I've found films in it that I've enjoyed. I must disagree with the critics who have labeled "Drinking Buddies" a "White People Problems" movie. Privilege seems to be the farthest thing from these characters' minds, and the problems they have are universal regardless of how poorly rendered they are.

Do yourself a favor. Bypass "Drinking Buddies" in favor of hanging out with your own. You'll have more fun, and I bet the conversations will be better. 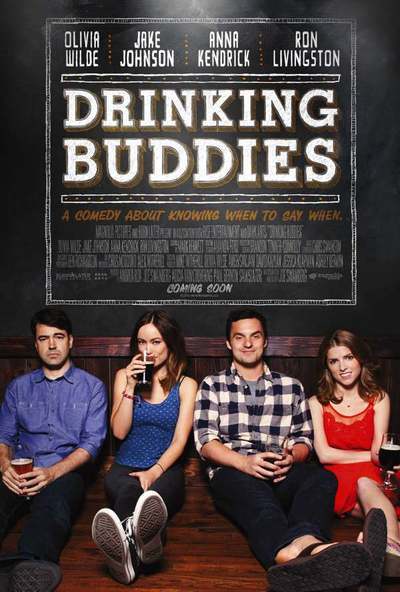