A light touch doesn’t suit the heavy themes in “The Power,” a horror psychodrama that’s specifically concerned with sexual misconduct and then more generally about the abuse of (you guessed it) power at a London hospital. These social issues are obviously broad enough to still be prevalent, but “The Power” is set in 1974, as an opening title card explains:

“Trade unions and the government are at war. The economy is in crisis. Blackouts have been ordered to conserve power, plunging the nation into darkness every night.”

This prefatory text suggests a class-based understanding of what happens to Val (Rose Williams), a meek trainee nurse who’s studying “the connection between poverty and health” (her words) when she’s visited and possessed by a ghost at the East London Infirmary.

Val’s topic of study is worthy, as is the filmmakers' focus on the many little ways that Val is pressured (both socially and professionally) to keep quiet about, uh, everything that happens at the hospital. Unfortunately, the Infirmary’s chain of command is often more interesting than the secrets that Val must keep under her nurse’s cap. And while systemic abuse is often overwhelming because of its universality, the inciting details of Val’s problems are too impersonal to be disturbing.

So it’s not surprising that Val, being a meek but well-meaning do-gooder type, takes a moment to discover what’s really going on at the East London Infirmary. First she accidentally embarrasses her supervisor, the school-marmish Matron (Diveen Henry), who warns Val that she must follow the Matron’s instructions on how to wear her work uniform (skirt three inches below the knees) and when to talk to the staff doctors (pretty much never, since “they communicate above your level”).

Val doesn’t break these rules willingly: she’s asked impertinent questions (ie: for her professional opinion) by the young and unusually warm Dr. Franklyn (Charlie Carrick). Franklyn’s status presents a credible damned-if-you-do/damned-if-you-don’t dilemma, the kind that often arises when you get contradictory instructions from two different bosses. So the hospital’s Matron punishes Val by assigning her to the night shift on her first day. That decision inevitably leads Val to discover something that may or may not be haunting the Infirmary.

I say “inevitably” because “The Power” is a possession flick, complete with spastic heaving, disbelieving co-workers, and a frightened pre-teen who tries and fails to warn everybody about the dangers that (mostly) come at night. Most of the items on this formulaic checklist are used well enough, but none of them are surprising or so well-realized that they’re still compelling.

In fact, the weakest parts of “The Power” are the ones where a dark, melancholy ambience is meant to carry the movie, especially when an invisible presence takes control of Val’s body and shakes her like a ragdoll. The most memorable of these scenes is the one where an unseen hand lifts Val’s skirt over her knees, which are presented from behind; a chorus of ghostly, Penderecki-esque moaning can be heard on the soundtrack, but it doesn’t add much to the sequence. I don’t know if that’s the image you want your genre movie to be remembered for, but it does stand out, if only for its sheer brake-tapping gentility.

The rest of “The Power” isn’t as jarring. A lot of the dialogue, which is credited to writer/director Corinna Faith, is dry and insistent. Take for example any scene where Val’s colleagues talk about the above-mentioned pre-teen, Saba (Shakira Rahman). Saba, being a young person of color who doesn’t speak fluent English, is treated as an abstract thought problem by Val’s stereotypically prim and/or disengaged peers. Saba is also presumably who Matron refers to when she peevishly tells Val that “The connection [between poverty and health] is that people around here live like animals.” Even Terry (Nuala McGowan), one of the other night shift nurses, treats Saba as less than human. Referring to Val’s rapport with Saba, Terry smirks: “Will ya look at that? Snow White has a way with the animals.” These comments are so obviously wrong as to be waved away uncritically: even working-class people can become jaded enough to be cruel. That’s what a little power does, as the title suggests.

Still, Terry’s “Snow White” crack is also basically accurate: Val’s character is simple enough to be reduced to her purity. She’s new, she’s determined, and she means well, so she’s ostensibly sympathetic. That’s enough to keep things going during the movie’s first half, which mostly concerns the hospital as a bureaucratic microcosm of competing personalities. But eventually, Val needs to be more than just a generic symbol of right-minded martyrdom, and she’s never allowed to become more than that. The circumstances of her suffering are too slight to register, making it hard to feel anything for Val beyond a general sympathy. That may be enough for already-invested horror buffs, but everyone else can sit this one out. 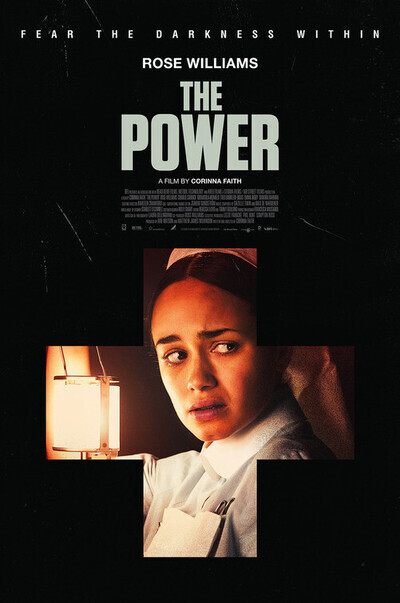 Paul Antony-Barber as The Chief