The Possession of Michael King

David Jung’s “The Possession of Michael King” starts with a believable performance anchoring an intriguing premise: a skeptic sets out to make a documentary disproving the existence of the devil, and, well, there’s no movie if he succeeds. Sadly, shortly after its set-up is established, Jung’s film goes through all the machinations of a found footage possession film with about as much creative spark as an apathetic teen checking off a list in a film class that he hates. Loud noises, check. Shaky cam, check. Increasingly illogical plot, check. Innocents in danger, check. Check, check, boring check. “The Possession of Michael King” becomes one of the most plodding, dull exercises in horror in a very long time. The most horrific moment for this viewer came when I checked the time on my screener to realize it was only about half over.

The true shame of “The Possession of Michael King” is that all of the uninspired filmmaking obliterates a solid performance from Shane Johnson as the title character, a bitter man turned against God for good by the loss of his wife, which has forced him to become a pretty inferior single father to his daughter Ellie (Ella Anderson). Michael decides to make a documentary—setting up the found footage format—about fringe religions, mostly those who bow to Satan. He starts by challenging a psychic (Dale Dickey) who advised his wife at one point and whom he now partially blames for her death. He speaks to a Priest about exorcisms. Eventually, he ends up in a basement, on LSD, tied up in part of a Satanic ritual. Most of this first-act material with actual dialogue and character works reasonably well. It’s when the titular possession kicks in that the movie literally goes to Hell.

Michael starts to hear things, see things, know things that he wouldn’t if something wasn’t seriously wrong with the state of his soul. Of course, while there might be an interesting film in whether or not Michael is going crazy, that’s not this flick. We know from the black eyes and demonic voices that Michael is in serious trouble, as are those around him. The first time I saw the family dog, I knew he was in for some bad luck. Why? I’ve seen possession films. And anyone who has seen a possession film can dig out the clichés in this one like a Greatest Hits of the genre.

What’s so depressing about fare like this is how creatively uninspired it feels to see the same tricks pulled over and over again. Horror, true fear only comes from the unknown, the unexpected, the unexplained. There’s never a moment in “The Possession of Michael King” that isn’t telegraphed either by the film itself or from memories of a superior one. It is a work that mistakes loud for scary and turns to camera tricks just to keep you awake. And I won’t even get into how much it fails the Why Would Somebody Keep Filming Test of the found footage sub-genre, one that seems to have exhausted most fans of the horror flick, but even they will be surprised at the depths of its latest failure. 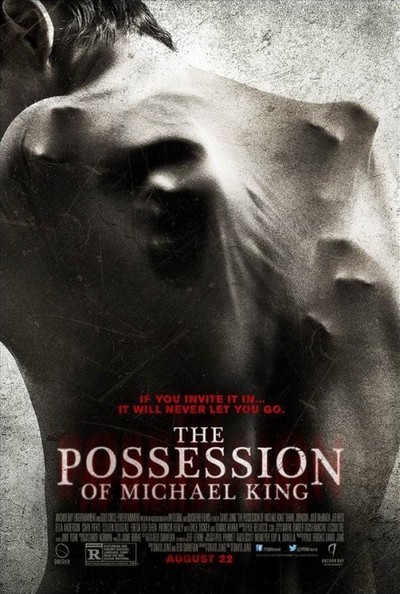 The Possession of Michael King (2014)

Rated R for disturbing and violent content, language, some drug use and sexual material