The unfocused Latvian drama “The Pit” starts and stops with Markuss (Damirs Onackis), an alienated 10-year-old who’s developed a negative reputation among his neighbors following an incident with a local girl and a sunken pit. “The Pit” isn’t just about Markuss, nor is it even this year’s only dark coming of age story involving a backyard depression and an emotionally withdrawn pre-teen: there’s also “Don’t Tell a Soul” and “John and the Hole,” the latter of which is especially good.

What’s uniquely underwhelming about “The Pit” is that it’s also about the other characters in its disturbed child protagonist’s orbit, like Markuss’ gruff but attentive grandmother Solveiga (Dace Everss) and his mysterious loner friend Sailor (Indra Burkovska). All of these morose-looking side characters have a few subplot-worthy regrets that are mostly implied through incident-free dialogue and some flashbacks. So why all this to-do about Markuss, and not everyone else? It’s hard to tell based solely on “The Pit,” an adaptation of three short stories from Jana Egle’s collection Into the Light.

If you’re like me, you might ask yourself: why am I trying to see the humanity in Markuss, a fair-skinned kid whose character is primarily defined by an incident involving his blithely insensitive neighbor Emilija (Luize Birkenberga)? Details of this traumatic event are unclear—and slowly revealed through a series of flashbacks—but Emilja’s mother Sandra (Inese Kucinska) is quietly leading a conspiracy to punish Markuss. And while some things about Markuss are meant to seem ambiguous, you can still tell that we’re (basically) meant to sympathize with him given that he finds a creative outlet with Sailor, a hermitic glazier. Markuss has an eye and a drive to make something with stained glass, and only Sailor cares enough to encourage Markuss. Even Solveiga doesn’t see that much of Markuss.

Neither do we, for that matter. Some characters are more interesting than others, but even the most compelling side characters are reduced to a few token dialogue exchanges, where they imply a lot, but don’t really explain much about Markuss or his actions. In one scene, Sailor reveals something that’s so upsetting and out of the blue that, if “The Pit” is your first exposure to Egle’s characters (and it was for me), you might wonder why there’s not a lot more from wherever that came from.

Until this point, Markuss’ pre-adolescent childhood has had a woozy, oversaturated look that over-stresses shadows and dark lines to the point of distraction. You can sort of understand why “The Pit” looks as dark as it does once Sailor tells (or really hints at) his past. Because Markuss’s story is generally about the pervasive sadness and unresolved tension that connects him with his loved ones; it’s about a general mood, not any individual characters. So you’ll either feel dutifully overwhelmed by an unfocused pile-on of subplots, which only have a vague connection to Markuss’ story, or you won’t.

Viewers can also tell some things about how we’re supposed to feel about Markuss by the sheer amount of screentime dedicated to Roberts (Egons Dombrovskis), Markuss’s volatile uncle. Roberts beats his shy wife Smaida (Agata Buzek) and is also prone to emotional outbursts; Roberts is not very sensitive, but he does have enough of a temper to make you groan whenever he re-appears on-screen. And not just because Roberts is a less interesting character than Sailor, Solveiga, or Markuss—Roberts’ scenes reduce him to his all-caps behavior. Still, Roberts is an unfortunately characteristic part of Markuss’ world, which is also potentially revealing.

As I watched “The Pit,” I got the sense that I was looking at an ambitious moral tale, but with only a fraction of the information I’d need to come to my own conclusions. Because when you begin and end a movie with a young man who probably did something rotten because he felt slighted, and then you spend most of that movie building a character defense for this kid, mostly by pointing to his home life and creative activities ... you should probably develop the rest of his world so that more essential information can’t just be selectively ignored.

I’m interested in modern Euro-dramas like “The Pit” because they’re (mostly) about how hard it can be to forgive our loved ones, even as we see them working through their own problems. But the more provocative aspects of this movie are often handled with too much delicacy, and eventually, all the pseudo-humane subplots and tangents that take us away from Markuss feel more distracting than thoughtful. There are a lot of ideas swimming around in “The Pit,” but most of them aren’t arranged well enough to demand your attention. 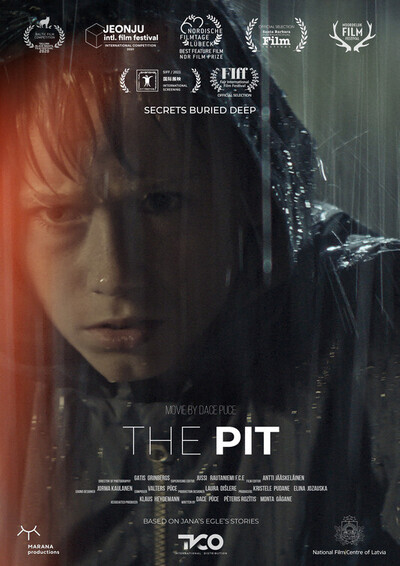