Depending on how you look at it, “The Pink Cloud,” an eerily atmospheric yet understated science fiction parable, either represents a case of fortunate or unfortunate timing. A claustrophobic drama of humanity stuck in quarantine following the sudden and inexplicable appearance of toxic pink clouds, "The Pink Cloud" was shot in 2019, before anyone could have any idea how relevant a story about an endless quarantine was about to be.

The film centers Giovana (Renata de Lélis), a young woman who finds herself stuck for the foreseeable future with Yago (Eduardo Mendonça), a man who was only ever supposed to be a one-night stand. Instead, he becomes her only human connection, first for weeks, then months, then years. Yago manages to make a sort of tired peace with the situation, albeit not without the occasional bouts of yearning and lamentations for the world as it used to be. Giovana is unable to do the same, and instead goes through cycles of trying to force herself to accept the situation, suppressing her anger and desperation until it inevitably explodes to the surface and the cycle repeats. Her spiraling is the engine that propels the film.

Though made prior to the pandemic, it is incredibly difficult to not view "The Pink Cloud" through the lens of the past few years. The coincidences can be striking, like when a friend of Giovana’s, stuck facing the years of quarantine all alone because her boyfriend happened to be running errands when the cloud arrived, laments, “How come no one has a solution? A mask, something that allows us to go out, you know. To see people.” There are moments like these where the uncanniness is rather fascinating. Unfortunately, on the whole, particularly later on, these similarities instead become disengaging—an abstraction of a reality we are all overtired of engaging with in any context, even if it's coincidental.

“The Pink Cloud” is the debut feature of writer/director Iuli Gerbase, and the Brazilian filmmaker demonstrates a definite eye and a distinctive voice as a visual storyteller. The imagery rings with intentionality; no shot feels taken for granted as far as aesthetics are concerned. Unfortunately, the exact opposite could be said about the narrative—this is the sort of film where aesthetics trump all other concerns to the point of becoming a flaw. “The Pink Cloud” ultimately plays out as a collection of scenes united by a coherent tone and themes as opposed to feeling like a narrative that builds on itself into something greater than the sum of its parts.

Characters are tragically distanced from each other in the eternal quarantine of “The Pink Cloud,” but they are also held too far from the audience for that tragedy to resonate on an emotional level. It is a film that is easy to admire aesthetically and presents some interest to engage with intellectually—even if it does grow repetitive on that front—but for all its claustrophobic imagery, you ironically cannot get close to Giovana or Yago.

This is a gorgeous feature, but there is also a gorgeous short that could easily be cut from this feature which would have the exact same impact in a third of the runtime. The intentionality and editorial eye that make the style of this film so compelling feels sorely lacking from the script, which is at once scattered and repetitive. It obsesses and then loses interest, perhaps best illustrated by the usage of Giovana and Yago’s child, who is incredibly convenient in all the ways a real child is not. The child is present when the film wants to demonstrate the central couple playing happy family—or desperately unhappy family—and handily absent when not relevant to the sequence in question, even when the sequence in question involves turning the house into a pretend night club, strobe lights and blaring music included.

While some filmmakers, especially early in their career, can have a tendency to over-explain plot points and do too much exposition, Gerbase goes too far in the opposite direction. There are a lot of sequences here that come across like thesis statements too impatient to flesh out these claims with supporting evidence, not to mention taking the time to render the characters with enough clarity that a viewer might be able to get particularly invested. The film technically flows well, and could be a calling card for a filmmaker with a distinctive eye, but the story ultimately feels less like a journey and more like it’s pacing in circles until it tires itself out.

“The Pink Cloud” opens at the Quad in New York on January 14 and the Laemmle Monica Film Center in Los Angeles on January 21. The film will debut on digital and VOD on March 1. 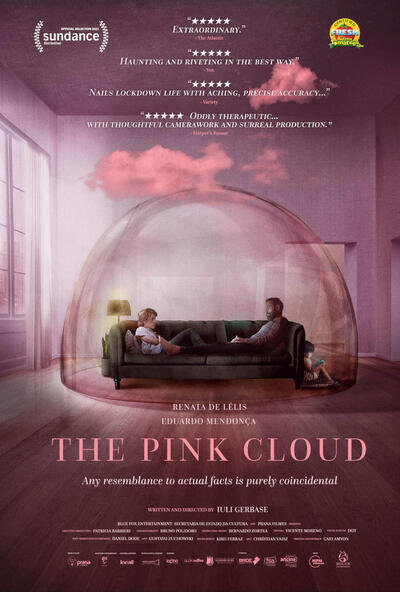 Rated R for sexual content/nudity, some language and brief drug use.