Baseball player character study “The Phenom” very rarely takes place on the field, but within the tormented silence of a young athlete who has been dehumanized by his father into a pitching machine. In contrast, its big events are therapy sessions that Hopper Gibson (Johnny Simmons) has with Dr. Mobley, a sports psychologist played by Paul Giamatti (playing a low-speaking mentor figure, yet again). The film’s first few minutes are a cold open of Hopper talking, shadows of raindrops reflecting on the pitcher's face, about why he threw five wild pitches in a row on national television the other day. Writer/director Noah Buschel then cuts to a credit sequence—handwritten text over a wallpaper of flowers, while Piano Sonata No. 11, by child prodigy Mozart, plays. A welcome surprise for sports cinema, "The Phenom" handles itself like Robert Redford's "Ordinary People" when exploring the psychology of a Lebron James or Johnny Manziel-like sports sensation.

The film juxtaposes Hopper's therapy with a recent past, when he was the #3 pitching prospect in the nation as high schooler, motivated by the training of his estranged father Hopper Sr. (Ethan Hawke). A screw-up ballplayer himself who thinks he recognizes greatness because he knows failure, Hopper Sr. has established what he calls "rules," like to never bring emotions to the mound. In their disturbing first scene together, the father returns home to throw a beer can at Hopper Jr.'s head because he reacted during a recent game, and then makes him run suicides in the driveway. With only a few scenes, Simmons and Hawke create a vivid, disturbing picture of how, like athleticism, masculinity is conditioned by ignoring natural aspects of human experience.

This type of abuse lingers in the film's long takes of minimal sound and light, in which a numb Simmons struggles to connect with people (a girlfriend, Sophie Kennedy Clark's Dorothy, or a coach, Paul Adelstein) through intimate conversation. For whatever success he has achieved in either part of his life, Hopper Jr. is lonely, traumatized. Society adores winning stories, but Buschel's narrative efficiently recognizes that taken without images of money and fame, ego can be a very negative, isolating value.

Buschel's narrative device of using therapy sessions can feed his bad habit for expository dialogue, but "The Phenom" gets incredible depth from Simmons' major performance. He has that natural charisma we gravitate to with similar actors, like Tye Sheridan or the late Anton Yelchin, who fit into characters of raw backgrounds with an expressiveness entirely their own. Simmons has always been an interesting young actor, his dialogue coming out of a clenched jaw and slightly shy presence, and speaks volumes here with this figure. By very rarely hitting a false note, Simmons brings us into Hopper Jr.'s mind, presenting with exceptional naturalism how a young man could become so tangled up on the inside and petrified to be unwound.

There is a delicacy that Buschel establishes with the very best moments of "The Phenom" that he himself can be guilty of abusing. It's a bit disappointing when his climax tries to rip out the hearts of its characters, especially when dramatic restraint proves to be much more disturbing. As director, Buschel feels like he has something to prove, overzealously including showy filmmaker tricks: split-diopter shots, iris shots, time lapse and graphic match cuts. These stylistic choices are more telling of his vision with camera than character, and prove to be less impressive than his use of silence, or lack of it. One of the Buschel's most resonating choices is how that Mozart sonata taunts Hopper Jr. everywhere—it's whistled by one character, hummed by another and later played on a ballpark organ.

If "The Phenom" could be compared to any baseball movie before it, "A League of Their Own" offers a fascinating contrast; Tom Hanks' macho declaration "There's no crying in baseball!" echoes every time Hopper Sr. comforts his traumatized son by preaching "pain is weakness leaving the body." By taking a step back from the ballgame, Buschel recognizes the tragedy within Hanks' once-funny line, and the toxic nature of believing it. 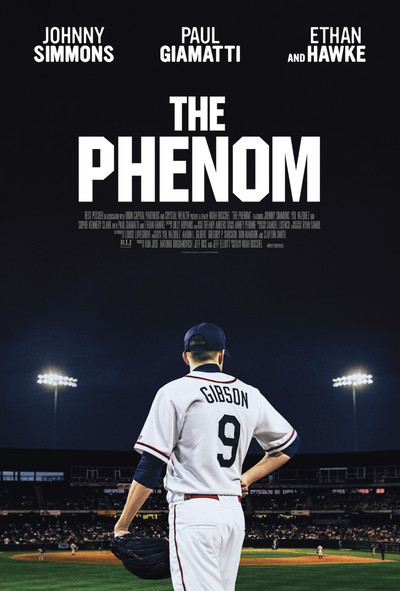