Charlie (Terrence Jenkins) is a ladies' man, committed to a life of no emotional commitment. In the first two seconds of the film, he picks up a hot babe on the beach, and takes her back to his palatial pad for 1.) a photo shoot (his Instagram feed is well-renowned) and 2.) supposedly hot sex, but it's so discreetly filmed it's hard to tell. Later, he meets up with his group of friends, toting another babe on his arm, a bimbo who can barely put a sentence together (maybe because her dress is so tight). "The Perfect Match," directed by Bille Woodruff, with a script by Gary Hardwick, Dana Verde and Brandon Broussard, tells the story of how this unrepentant man-whore opens his heart to love. Some of it is so predictable you could set your watch by it, but there is a welcome (and surprising) layer of complexity running through the film that makes it a little bit more than your standard fare. The likable and funny ensemble helps too.

Charlie is a talent agent with a gift for taking care of his clients, diffusing their melt-downs, and seeing the potential in YouTube/Vine/Snapchat stars. (Brandy shows up in a very entertaining cameo as a diva so committed to her spirituality that for an hour a day her "feet must not be on the earth," so she has hired a bodyguard named Boris to carry her around in his arms.) Charlie's got a great tribe of friends, all of whom get their own story-lines in the film. There's Victor (Robert Christopher Riley) and Ginger (Lauren London), together since they were kids and now planning their wedding. Ginger makes more money than Victor does, and he's having a crisis about it. Pressie (Dascha Polanco, from "Orange Is the New Black") and Rick (Donald Faison) are trying to have a baby, and starting to panic that it hasn't happened yet. Charlie's friends hammer away at him relentlessly for his single status. (If Charlie ever fell in love, you wonder what his friends would find to talk about.) Charlie insists he's happy the way he is, that not everybody wants to be married. It's a fair point. His sister Sherry (Paula Patton) is a therapist who bombards him with self-help-speak; she's convinced that unresolved grief at the death of their parents is why Charlie shut the door to his heart. Charlie laughs it all off. He's sick of being badgered, and who can blame him? However, when his pals challenge him to date only one woman in the period leading up to Victor and Ginger's wedding, Charlie agrees. They shake on it, and two seconds later Charlie has a juice-bar meet-cute with Eva (Cassie Ventura).

Eva has only been in long-term relationships, but says she wants to try something fun and no-strings. They have non-explicit, supposedly hot sex not only at his house, but in restaurant bathrooms, and it's all good, until he starts to develop feelings for her, mainly because she shows interest in his photography and listens to him when he complains about his job. He never asks her anything about herself. He doesn't even seem curious. It's hard to tell whether or not this is a deliberate choice on the part of the screenwriters or evidence of a blind spot. It doesn't help that Cassie Ventura, a singer and model mainly, delivers her lines in a wooden monotone, with nothing behind her eyes. She's beautiful, and Eva's outfits are outrageous sex-bomb extravaganzas, fit for a Prince video or a Fashion Week catwalk, but there's no real character there. The story is supposed to be that a hopeless Ladies' Man falls in love almost in spite of himself, and so it might have helped to have given Eva some qualities other than a gorgeous body and an endless wardrobe of crazy outfits.

When things start to go south for Charlie, he basically becomes an alcoholic over the course of a "long weekend." He lies in bed, surrounded by empty bottles. He slumps on the boardwalk, sipping from a flask. It's all a bit ridiculous. His friends are concerned, but he pushes everyone away. He doesn't agree with some of the decisions being made at work. The lovely dead-eyed Eva has helped him see that maybe he can have more from life.

Some of this works, some of it doesn't. There are awkward sequences where the comedy falls flat, and there are some sub-plots that don't really add much. (The office stuff, except for Brandy being carried around by "Boris," is both boring and over-complicated. It's "Jerry Maguire"-lite.) Bille Woodruff, a music video director who has helmed a couple of follow-up films in popular franchises, keeps the story zipping along, though, and any time all of the friends are onscreen together, the film is successful because of the very real dynamic they create. It's totally believable that these people have known one another since grade school. You like all of them.

As predictable as much of "The Perfect Match" is, the way it all plays out has some unconventionality. The fiction/fantasy that dominates so much of our lives is that "all it takes" to be happy is to find "the right person." And, supposedly, there's a "right person" out there for everyone. Clichés abound. "Once you stop needing a relationship, voila! Your perfect mate will arrive!" "You just haven't met the right person yet." "Once you're finally okay with being alone, whaddya know, here comes the Perfect Match!" Or, even worse, "The best way to go through life is in a relationship." These bromides are so omnipresent they're practically propaganda. But life is messier than that, and some people don't find their "perfect match," and, besides, nothing is perfect, anyway. Charlie has issues, that's for sure, and they're presented in pretty obvious strokes (why won't he go visit his parents' graves?), but at least his issues have more depth than most other films of this nature allow. 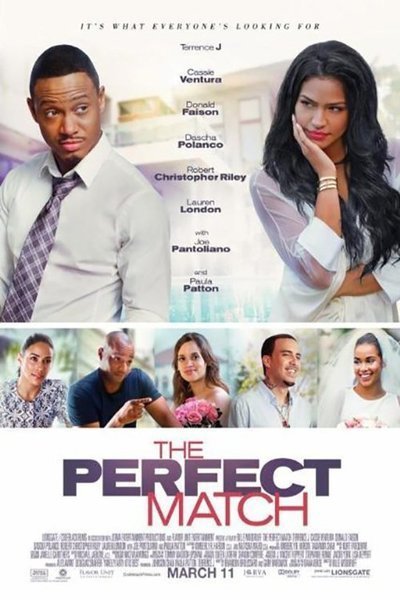 Rated R for sexuality, some nudity, and language throughout.