Mira Nair's "The Perez Family" opens with a Fellini-esque scene of elegantly dressed people promenading by a beach. Then the music turns sad as they begin to wade into the waves, and there's a cut to a Cuban prison. For Havana's bourgeoise, the good times are over.

Cut to the early 1980s, and a boatload of prisoners released by Fidel Castro is sailing for the United States. We meet Juan Raul Perez (Alfred Molina), who still carries a flame of love in his heart for the wife he has not seen in 20 years. Also on board is Dottie Perez (Marisa Tomei), a sometime hooker, determined to get a fresh start in the new land.

These two Perezes are not related. Indeed, as Juan tells a U.S. immigration official (also named Perez), "If you want something done in this life, ask a Perez - there are so many of us!" They join thousands of other refugees in a temporary camp set up in Miami's football stadium, and when Dottie discovers that families can find American sponsors more readily than single people, she proposes to Juan that they become "married" to squeeze through an immigration loophole. To increase their chances, they even recruit a youngster to be their son, and a dotty old man to be the grandfather.

Juan goes along with the scheme, but only because he is so eager to be reunited with his wife, Carmela Perez (Anjelica Huston), who got out of Cuba 20 years ago. They have been waiting for each other ever since, but now they may stumble just as they reach the finish line. Still on the boat, Juan frets about his appearance after years in prison: "My teeth are too poor to kiss my wife." Dottie boldly kisses him. "Don't worry," she says; "you can kiss your wife." "The Perez Family" makes a romantic comedy out of these offbeat ingredients, and although we have not often seen such stories told about Cuban-Americans with political backgrounds, we have seen some of the same elements before, in screwball comedies. What happens is that just at the moment they are about to be reunited, both Juan and Carmela fall in love with others - but refuse to admit it.

The other key player in the cast is Chazz Palminteri, as Pirelli, a federal agent who is working with the Miami police and finds himself making frequent visits to Carmela's house when her alarm system keeps going off. The alarms have been installed by her jealous brother, who goes ballistic when she gets near any man. Carmela and Pirelli soon find that when the bells toll, they toll for them. It's fairly clear early in the film what will happen, more or less. The fun is in getting there.

There has been controversy over the casting of so many non-Hispanic actors in Hispanic roles in "The Perez Family" - and there was certainly no shortage of talented Latino actors for "My Family," a film released at about the same time. But maybe non-traditional casting is a two-way street; what's certain is that the actors bring real heart to their roles. Tomei in particular has undergone some sort of transformation from her performances in "My Cousin Vinny" and "Only You," and now emerges as earthier and juicier. Anjelica Huston brings some of the same conflicting passions to this role she had in "Prizzi's Honor," and Alfred Molina, a British actor, is surprisingly convincing as her husband.

The director, Mira Nair, is a New Yorker who was born in India. She has a special interest in new arrivals to America; her previous film, "Mississippi Masala" (1992) was about a family of Indians from Uganda, operating a motel in the South. Here, she shows a good eye for the details of immigration, some of them fairly bizarre, as when the Miami Dolphins practice on the field of their stadium while the stands and entrance halls are jammed with thousands of refugees.

There are other details: The fake Perez "family" is moved out of the stadium, housed in a church rectory, and makes money by selling flowers at stop signs. A U.S. immigration official, himself an immigrant from the Indian subcontinent, is as bemused by the laws as anyone, but sworn to uphold them. And Carmela, now a Miami suburbanite with a daughter (Trini Alvarado) her husband has never seen, is willing to say anything to be reunited with him. ("She may be the most beautiful liar I have ever met," Palminteri muses).

The movie relies a little too much on contrivance sometimes. It's barely possible that Dottie dreams of making love to John Wayne soon after her arrival in America, and the scene where she finds out he is already dead is a funny one. But surely even in Cuba she would have known Elvis was also dead ("Elvis, too? So many assassinations!"). The movie sometimes bends the plausible to set up a laugh, and most of the time I didn't care, because I was enjoying the company of the characters. 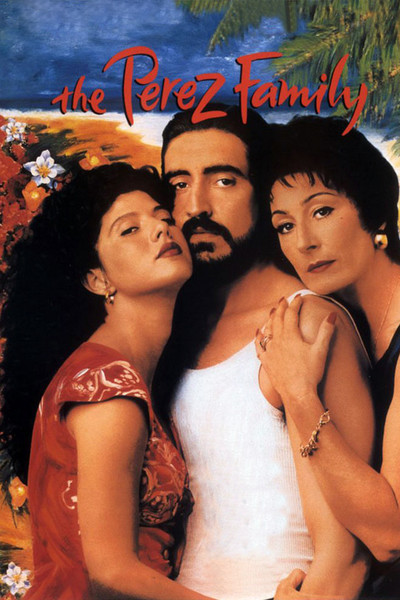