The Painter and the Thief

There are three sequences in “The Painter and the Thief” that are going to stick with me for a long time. The first is an obvious one that everyone who sees it is going to be talking about—a young man named Karl-Bertil sees a painting of himself done by the talented Barbora. Watching the beauty of what he's seeing and what it means to him wash over his face is devastating. It’s clearly one of the few times in his life that his presence has led to beauty. He is overwhelmed by being seen so exquisitely through someone else’s eyes, and he begins to tremble and cry, unable to look away from the painting. By this point in the documentary about him and the painter, we know a bit about his dark past, but all we really need to know is in that expression. The concept of being seen through someone else’s eyes drives the best parts of “The Painter and the Thief,” a documentary that illuminates a great deal about the human condition even if it does kind of fizzle out in the third act.

This concept drives the two sequences in the film I like even more. At separate times, Bertil is described by Barbora, and vice versa. Hearing someone who was a relative stranger pick out someone else's interesting traits is fascinating on its own but then add to that the layer of the filmmaker—director Benjamin Ree is the one choosing the images on the screen. For example, Bertil speaks of the importance of the day that Barbora saw a man die when she was a child and Ree chooses the image of a body under a sheet in the street. It is Barbora’s memory described by Bertil and visually interpreted by Ree. I could have watched this for hours. I love the parts of “The Painter and the Thief” that dig into the concept of interpretation and how the way other people see us influences the way we see ourselves.

“The Painter and the Thief” begins with a brazen, daylight robbery. Two men, openly caught on security camera footage, break into a gallery and steal two paintings by Barbora Kysilkova. One of the men, Karl-Bertil, is caught and tried. At the hearing, Barbora works up the courage to speak to him, asking if they can talk outside of the legal proceeding, and quickly thereafter asking if she can paint him. As he sits in her apartment, they talk about their lives and become friends. Bertil claims to not remember a thing about that day. He took one painting; his buddy took the other. A severe drug addict who had been awake for four days and was looking for his next high, he doesn’t even remember what he did with the painting.

It's hard to say if it’s a product of the editing or a credit to her character, but Barbora seems to give up fairly quickly on finding out what happened to her work. This is not that movie. This is a movie about a damaged soul having someone to talk to and the friendship that forms between the two of them. Over years, Ree returns to this pair for major events in their lives, including a horrible car accident that nearly kills Bertil. Barbora’s partner suggests at one point that she likes danger, a product of abusive relationships in her past, and there’s something about a tattoo-covered criminal junkie that simply attracts her like a kid who likes to play in traffic.

I’ve read some people claim they didn’t even know “The Painter and the Thief” was a documentary until it was over, which typically sounds ridiculous but is more understandable here. There are no interviews to camera, and there's little intrusion by the filmmaker. Ree has a very cinematic language, shooting long shots down hallways, trailing his subjects like a French New Wave director would follow his fictional creations down a sidewalk. He sees the deeply cinematic story unfolding in front of him and mostly gets out of its way, almost to a fault. After an hour, it felt like I had gotten everything there was to get out of “The Painter and the Thief.” And while an hour of time spent with two subjects like Barbora and Bertil can be fascinating, I was hoping for something to take the film to the next level in the final section, but the opposite almost happens. A question that feels like it should have been asked long before is saved for the “climax,” and I was reminded of the construction of the film in a negative way.

And yet I can’t deny the power of the best moments in “The Painter and the Thief.” More than any documentary in a very long time, it’s easy to imagine a narrative remake—I’m casting Mia Wasikowska as Barbora and Caleb Landry Jones as Bertil. I hope that version finds a more satisfying conclusion, but I also suspect it can’t possibly replicate that moment when a lost soul looked at a painting and realized that someone was trying to find him. 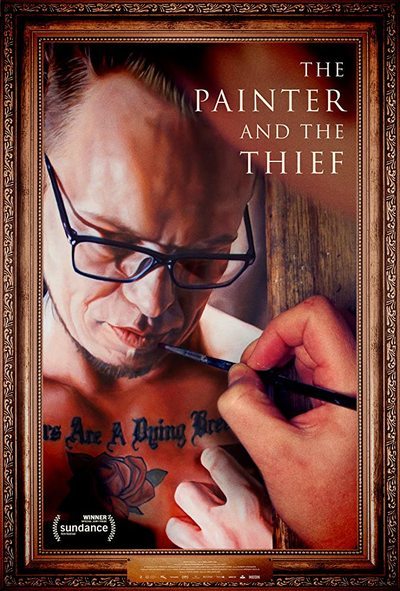