I promise I won’t overthink “The Package,” a Netflix Original Movie about some camping high schoolers racing to bring their friend’s recently-severed penis to the hospital before it’s too late. The film is essentially one long joke about a dick, with various gags built into that concept, as if it wants to be the movie that says the word “dick” more than any production with roots to the Judd Apatow family tree. It might just be the winner of that designation, or at the very least, it deserves some type of special achievement award.

OK, the plot. A group of high schoolers are camping in the woods, in a booze-filled excursion that’s usually a boy’s trip between the neurotic Sean (Daniel Doheny), the happy-go-lucky Jeremy (Eduardo Franco) and aggressive Donnie (Luke Spencer Roberts). But now Jeremy’s easygoing twin sister/Sean’s crush Becky (Geraldine Viswanathan) are coming, and so is their no-BS friend Sarah (Sadie Calvano). Low-key antics ensue, like ball-busting Snapchats and snappy banter about whether Sarah and Donnie did maybe date at one point, but these scant personalities don’t make for a collective charisma.

A saving grace through this rough start is director Jake Szymanski’s narrative touch, which recalls how his debut “Mike and Dave Need Wedding Dates” became more about Aubrey Plaza and Anna Kendrick’s characters subverting the title, and having their own agency and fun: here, the dudes are extra helpless when it comes to their desired images of being a man, and are easily emasculated by the two women directly or indirectly, while love interests simmer. It’s a refreshing bent to gender dynamics in movies that start with immaturity, and it makes all the more sense when the plot involves you-know-what.

Anyways, on their first night of camping, a drunken Jeremy cuts his organ off while waving a switchblade around during some cliffside urination (hey, it happens). Flying through the air in slow motion, this very self-amused movie now has its main centerpiece, a dismembered member. Though the story struggles to take off with its main plot, which involves everyone finding the willie in the woods and then getting it to the hospital within 12 hours, the tone is what’s noticeable, if too tricky here—the disturbing event is never played too seriously, despite the loss of blood, or the general trauma. What results is either very informative and relaxed about the possibilities of penile reattachment surgery, or ill-informed and willfully negligent in a way that’s kind of hilarious.

“The Package” embraces the idea that these young men and women are clumsy, if not very dumb, and that proves to be a smart take from co-writers Kevin Burrows and Matt Mider. But the film often takes the short route to a gag in its first two acts, like their overly careless handling of the cooler’s contents, which leads to a snake biting the unit at one point, and then someone’s attempt to get the venom out. It becomes hard to trust the movie when it’s not so much a parody of their poor decisions but lazily enabled by them. There are plenty of moments in which it feels like it’s one wacky but not overtly funny set-piece after another, the package sometimes popping out of the cooler at an inopportune time.

But when it becomes more surprising with plotting in the last 30 minutes as the timeframe is closing, "The Package" does get better. Szymanski's comedic filmmaking begins to develop a strong signature with some tightly choreographed slapstick fighting, and the performers are more likable as their budding comic instincts blend nicely (Franco is especially good at selling his character's earnest dopiness). It all leads to a third act that is indeed standalone when it comes to dick joke cinema. And then the end credits bless you with an old-fashioned theme song that recounts the plot, a club-ready rap by Jeremy/Franco titled "Miss My Dick.”

“The Package” only made me laugh out loud once, at the very end and not because of a weiner joke, and yet the movie does feel to be an overall success. It’s a pseudo-experiment as stupid as it is genuine, and damn if this movie isn’t totally committed to its premise, which helps make it one of the more dynamic and noteworthy Netflix original comedies. 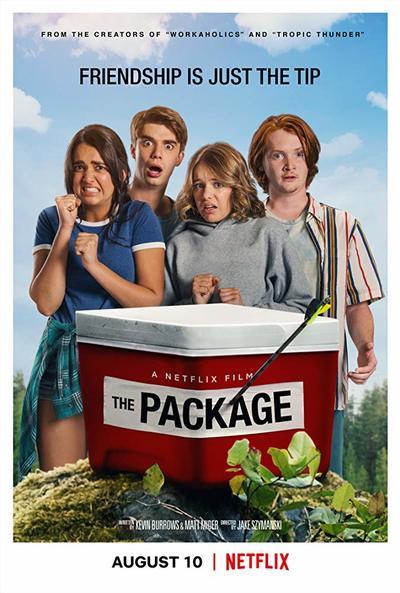