Movies rarely come as chic as “The Outfit,” a thrifty, continually unpredictable whodunit, fashioned with the same meticulousness found in the bones of a deceptively simple suit. (If you will pardon the immediate puns.) It’s surprising that this is writer Graham Moore’s first cinematic get-up since his polished WWII thriller “The Imitation Game” deservedly won him the Best Adapted Screenplay Oscar in 2015. Here, he also assumes the directing duties for the first time and with poise, cutting and sewing an understated single-location nail-biter with the same diligence he brought onto his aforesaid award-winner.

Indeed, Moore and his co-writer Johnathan McClain work wonders with the script of “The Outfit” through a gradually thickening plot that rarely shows its seams. It’s a mazelike puzzle of a film, one that swiftly invites the audience in for an involved round of Cluedo unraveling inside an intimate, handsomely smoky Chicago outfitter dressing its wealthy clientele in the 1950s. The master behind the small yet exclusive bespoke is Leonard Burling (Mark Rylance, as unnervingly stiff-upper-lipped and poker-faced as he was in “Bridge of Spies”), a Savile Row-trained cutter who’s left his London home for The States after the WWII. The Nazis were obviously the chief reason for his departure; blue jeans (even though they weren’t quite an established thing then) that threatened to put him out of business, as he says, was another. But the maestro sartor found his groove back in his Windy City atelier against the odds, after some secret tragedy. As long as you don’t call him a tailor—what is he, someone who just hems trousers and fixes buttons?—and refer to him accurately as a cutter, all will be well.

On the surface, such semantics seem to be the biggest drama in Burling’s predictable life, spent mostly in an exquisitely detailed backroom (dressed with the magical touch of production designer Gemma Jackson in earthy tones of creams, camels and browns), around a cutting table which Burling treats like an operation bed as he works with rolls of deluxe fabric with surgical precision. (In one of the film’s most involving sequences later, this reference comes to literal fruition during a few stunning minutes of tension.)

But it doesn’t take long for us to realize that the old artisan is mixed up with a lot more than stitches and cutting patterns. Gangsters, particularly the Boyle family—Simon Russell Beale’s seemingly temperate boss Roy, his spoiled son Richie (Dylan O’Brien) and their inside men Francis (Johnny Flynn) and Monk (Alan Mehdizadeh)—populate his joint frequently, using his workshop as a safe communication hub to drop messages and packages for their crime family members. Burling keeps a low profile and minds his own business alongside these crooked comings and goings, trying to set a father-figure example for his shop assistant Mable (a terrific Zoey Deutch), whom he sees as a daughter. But he seems a lot more than he admits. Meanwhile, sporting both a girl-next-door innocence and a sense of femme-fatale slyness, the complex Mable has her own plans. She can’t wait to get out of Chicago and maybe head for Paris. And she seems to be committed to doing whatever it takes for her dreams.

If only all could stay as smooth and operational as the film’s opening act. But as the pieces trickle in over the course of a day or so (and again, in one single location), we find out about a rivaling crime family, an elite crime organization called “the outfit” that Boyles want to become a part of as well as a possible rat, recording incriminating conversations on a new thing called a cassette and passing them onto the FBI. What could possibly go wrong when things like murder, money and romantic stakes are involved?

Part of the fun of “The Outfit” is its continually self-renewing demeanor that will keep the viewers guessing until its final moment. And it’s simply splendid to observe Graham in the director’s chair, orchestrating the film’s mysteries with a watchful eye. Indeed, what could have been a stage play turns into something magically cinematic in his hands—there is a lot of detail in what Moore chooses to show versus hide, which face he focuses on and how he goes about blocking his scenes. Equally impressive are the film’s costumes, crafted with dizzying period accuracy by Sophie O’Neill and the famous fashion designer Zac Posen. In the end, you leave “The Outfit” feeling like you have seen something rich, ravishing, and sumptuous. For a film that goes about its business through such limited resources, that’s quite a triumph. 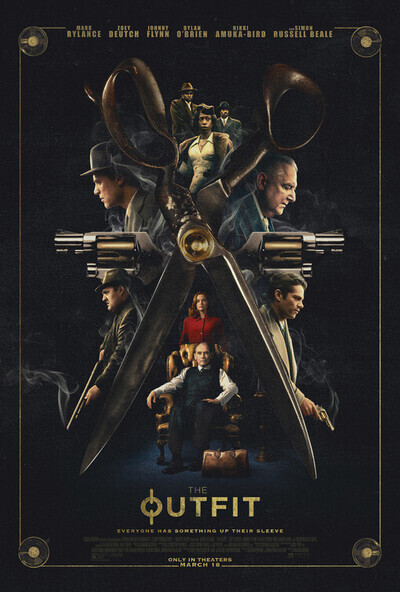 Rated R for some bloody violence, and language throughout.