The Other Side of Heaven 2: Fire of Faith

Eighteen years after the release of “The Other Side of Heaven,” writer/director Mitch Davis has made “The Other Side of Heaven 2: Fire of Faith” (which makes this the other other side of heaven?). Purely from a production-value standpoint, the sequel is more accomplished than most faith-based movies, and that includes its 2001 predecessor: a Mormon melodrama that was notable mainly for the presence of a young Anne Hathaway. (It came out a few months after “The Princess Diaries,” the film that truly launched her career.)

But Davis’ dialogue remains clunky and he never misses an opportunity to punctuate every feel-good moment with overwhelming, swelling music. He draws stiff performances from most of his actors, whose interactions are often painfully awkward. And as was the case with the original film, the structure is predictably episodic: Something potentially catastrophic happens, the characters pray, then a miracle occurs, over and over again. It’s fine for its target audience and probably quite affirming for those who already believe, but it’s unlikely to convince viewers outside the faith.

Still, Christopher Gorham once again exhibits a likable, everyman screen presence as Elder John H. Groberg, the Mormon missionary whose memoirs inspired both films, and he has such solid comic timing that it makes you wish he had stronger material to work with.

Gorham is stuck with narration off the top that recaps what happened in the first film and catches us up with what Groberg and his family have been up to since then. (“It was the ‘60s, and the world was changing in profound ways,” he explains in the kind of oversimplification that’s rampant throughout.) In the original “The Other Side of Heaven,” Groberg was a 19-year-old missionary from Idaho Falls, Idaho, who’d been sent to Tonga to work with and preach to the natives in the mid-1950s. It was full of icky white savior and noble savage stereotypes, which thankfully have been tempered here.

Now, a decade or so later, Groberg has been asked to return to the region as president of the entire Tonga-Fiji mission. Only this time, he’s bringing along his wife, Jean (New Zealand actress Natalie Medlock in Hathaway’s former role, her accent often betraying her), and their five daughters, one of them a newborn. For the majority of the film, Jean does little more than hold babies and smile kindly, and only one of the kids gets the luxury of anything resembling a personality. Still, they all dutifully trudge along for the adventure, which features some legitimately harrowing moments on the high seas. (It helps to have seen the first film, though, to understand why certain reunions and conversations matter.)

Davis bounces back and forth between Groberg and his family settling in and another family of faith that’s already established on one of the Tongan islands: Methodist minister Sione (a bellowing Ben Baker), who’s devastated to learn that one of his adult sons, Toutai (Alex Tarrant), plans to convert to Mormonism and become a missionary himself. Sione has always been mistrustful of another kind of religion taking hold on the island and is bitterly territorial over the hearts and minds of his followers. The parallel story lines result in some truly surreal crosscutting, but when Groberg’s wife gives birth to a sixth child—a boy, suffering from a serious illness—the two fathers eventually get the opportunity to meet up and find some common ground.

Everything is so extreme here—the storms, the score, the pouring of emotions—that a moment of subtlety is welcome by comparison. As Jean is in labor with the couple’s son at the low-tech, local hospital, villagers magically arrive with fruit, gifts and gentle songs to welcome the new baby. They literally surround her hospital bed as she’s cradling her minutes-old child in a scene that’s sweetly bizarre yet seemingly heartfelt. “Fire of Faith” could have used more of that kind of delicate human touch throughout. 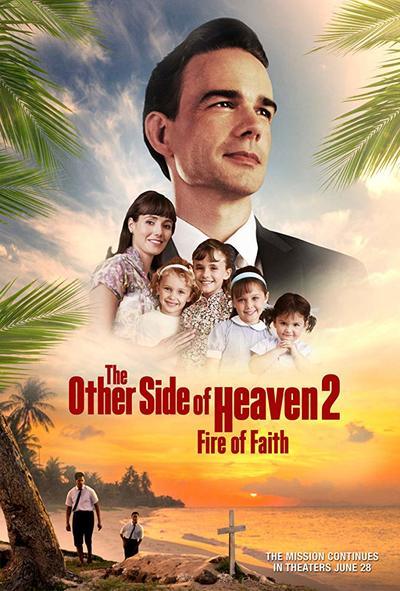