The One I Love

The set-up of "The One I Love," Charlie McDowell's directorial debut, starring Mark Duplass and Elizabeth Moss, is filled with tremendous possibilities, all of which are explored throughout the film. The set-up, reminiscent of some of Hitchcock's films, works like a well-oiled stopwatch: once the situation starts, it cannot be stopped. The film unfolds with a sense of inevitability, and while the events are odd, they never lose their logic. There's a reason "The Twilight Zone" is referenced in Justin Lader's script. "The One I Love" is a romance and a mystery and a drama, with really only two characters in it, characters who are sketches approximating human beings, but played with sadness and humor by the two lead actors. Not knowing the "twist" going in was part of the film's pleasure, and it's enough to say that nothing is what it seems.

Ethan (Duplass) and Sophie (Moss) are in marriage counseling for a variety of commonplace reasons: he cheated on her, they don't communicate well, they don't have sex anymore. They mourn their former "irreverent" selves, the selves who "did ecstasy at Lollapalooza." (That's as wild as they got.) Their relationship now consists of trying to re-capture the happiness they had in the past, with predictably hollow results. The marriage counselor (Ted Danson) suggests that they go on a "retreat" for the weekend. He has sent many couples to this place and they have all come back refreshed and renewed. Ethan and Sophie figure they have nothing to lose.

The "retreat" is a weekend alone in a big old house on a large property, complete with a pool and guest house. There are no other guests. There is no guru leading them through trust exercises. There is no Steve Carell in "Hope Springs." It is just Ethan and Sophie, hanging out, exploring the grounds.

Cinematographer Doug Emmett fills the screen with dark gloomy shadows, and strange points-of-view, the two characters seen through a doorjamb from an adjacent room, or through the windows from outside. These touches give a creepy horror-movie perspective to the point of view. Is something lurking out there for them? Are they being watched? Even the early marriage counseling scenes are filled with stark noir shadows on the wall and odd ominous angles. The commonplaces of Ethan and Sophie's boring marriage are made strange, eerie, in how they are filmed.

On their retreat, alone in the big house, Ethan and Sophie make dinner. They drink wine and smoke pot. They loosen up. The dynamic between Duplass and Moss has been tense and sad, and so their laughter brings with it relief, release, a sense that they are beginning to remember why they got together in the first place. That night, they crash in the guest house and have sex. But when Sophie mentions it to Ethan the next morning, he has no memory of it. Was he really that wasted?

Strange things keep happening, and these strange things seem to be emanating from the guest house. Ethan and Sophie, freaked out, flee the property, but then are drawn back, thinking maybe that their marriage counselor is on to something, that whatever this is, it is something they need to explore. Remember when they used to be open to new things?

But what they open themselves to is a Hall of Mirrors, increasingly disturbing, and the secrets start to pile up again, casually at first, and then consciously and deliberately. The entire film rests on the chemistry between Duplass and Moss. Except for the counselor, there are no other people in it. The two actors create a very real relationship, with a sense of shared joy in one another's company, and myriad problems threatening to derail the entire thing. We can see how bored they are with life, with themselves, and with each other. To Ethan, trying something new means "going horseback riding with a satchel of wine." Ethan and Sophie are not extraordinary characters. But the situation in which they find themselves in is.

Unabashedly entertaining at an efficient 91-minutes, "The One I Love" is an extremely confident first feature, with some really fun things to say about identity and relationship, connection and destiny. 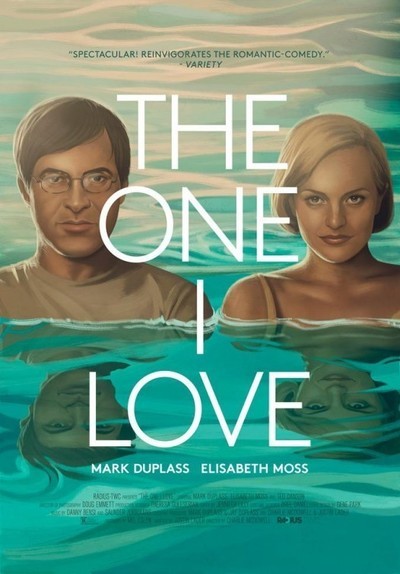 Rated R for language, some sexuality and drug use

Ted Danson as The Therapist