To offset the arrival of "The Nut Job", an underwhelming 3-D animated adventure, let us take a moment to praise the "Ice Age" franchise and its acorn-addict star attraction that is a likely inspiration for this strained exercise in fur-bearing tomfoolery: Scrat, that sublime creature of Sisyphean single-mindedness.

He covets his nut. He worships his nut. He puts his life on the line again and again to save his nut as it repeatedly rolls just out of reach. His actions speak so loud—along with his manic screeching—he doesn't even have to utter a word to connect with the audience. As a result of a simple yet durable premise and an abundance of animal magnetism, this saber-tooth squirrel-rat has risen to the recognizable ranks of such cartoon icons as Wile E. Coyote and Mickey Mouse.

Too bad that the makers of "The Nut Job" eagerly purloined Scrat's primal motivation—food—but failed to note the charm of his minimalist approach. Instead, the main character in this Canadian-South Korean-American production is Surly, a selfish purple squirrel (voiced with off-putting abrasiveness by Will Arnett), who quickly becomes mired in a heist-driven plot that defies logic and hardly goes anywhere.

Surly, who refuses to be a team player by helping out his fellow park-dwelling critters as they forage for sustenance before winter comes ("I'm no hero," he proudly proclaims), is involved in accidentally destroying what little they have stockpiled inside a massive oak tree. Raccoon, the seemingly avuncular leader of the urban woodland community who speaks with the sonorous tones of Liam Neeson, clearly has pawed through a copy of "Animal Farm"; he banishes handy scapegoat Surly and forces him to fend for himself in the streets of the bustling town while solidifying his own status.

It doesn't take long before the squirrel and his silent sidekick, Buddy the rat (who could be Ratatouille's meeker cousin), discover Maury's Nut Shop, which is chock full of tempting treats. The store proves to be a front for a motley crew of not-very-bright '30s-style gangsters who look as if they stepped out of an old Looney Tunes short.

The mugs want to rob the bank across the street. Surly and Buddy, soon joined by other rodent conspirators including chubby woodchucks, a mole and a common-sensical she-squirrel named Andie (Katherine Heigl, so vocally bland as to be unrecognizable), want to plunder the shop's basement storage area—or, as Surly calls it, "the lost city of Nutlantis." Each scheme involves making a tunnel, missions that are so easily accomplished that you barely notice they happen.

Double-crosses and car chases duly follow while supposedly funny distractions are peppered into throughout the muddled storyline. Fart jokes that fall flat. A variety of nut puns with no purpose. Gags built upon ancient stereotypes—cops like doughnuts, who knew? Most wrong-headed is the introduction of unnecessary gunplay into the proceedings. If you aren't doing a remake of "Bambi", firearms usually aren't the way to go these days when making family entertainment. And, of course, Surly becomes an unlikely hero.

The lone character that moviegoers might cotton to is Precious, a pug in the spirit of "Up"'s Dug that is lucky enough to have the voice of a very able Maya Rudolph. The bug-eyed pooch quickly drops her watchdog act at the store for the promise of being able to lick Surly's face.

It's not that the main talents behind "The Nut Job" don't know better. Director Peter Lepeniotis has worked as an animator at Disney and Pixar and his co-writer, Lorne Cameron, helped pen DreamWorks' similar "Over the Hedge" as well as Disney's "Brother Bear". While the film isn't the worst of its kind, it might be one of the dullest of recent vintage.

Perhaps they were counting on a surprise (and highly incongruous) appearance by Korean pop singer Psy, who—as even grammar-school kids know—is so 2012. But seeing a 'toon version of the performer doing his Gangnam Style moves alongside "Nut Job" characters during the closing credits comes off more as an act of desperation—or, more likely, a way to distract us from what we just saw. 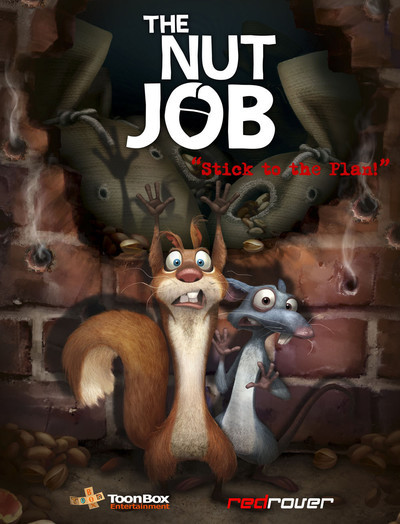 Will Arnett as Surly