“Love doesn’t die, people do.” Ilonka quotes that Merrit Malloy passage in Netflix’s “The Midnight Club,” and it’s really at the beating heart of Mike Flanagan and Leah Fong's ten-episode adaptation of the work of Christopher Pike in that it’s not just about trying to understand the end of life but using poetry and prose to do so. This is a show that’s not about death as much as it is about the things around the end of life, and what can’t be taken away: memories, stories, and love. It can be a little clunky in its messaging, but that’s forgivable given this is a show about young people that’s largely for a YA audience too (despite some wickedly intense imagery and the occasional f-bomb). Teenagers are supposed to be unrefined, uncertain, and unguarded. And so every time that “The Midnight Club” felt a little rough around the edges, I was reminded of the swirl of adolescent emotion that intensifies around issues as serious as death, more than being upset about any artistic failings. Still, fans looking for something as accomplished as “Midnight Mass” or “The Haunting of Hill House” may be a little surprised by the times this show drags in comparison or simply fumbles some of the bigger emotional beats. Think of this as a gateway drug for potential new horror fans, young people thinking about death in a new way for maybe the first time.

Ilonka (an effectively vulnerable Iman Benson) seems to have everything when it’s all derailed by a terminal cancer diagnosis. She ends up at a seaside Hill House stand-in named Brightcliffe, an old mansion being used as a hospice center for young people. There, she finds an eccentric crew of teens who give the show its title. They gather every night in the library and tell scary stories, trying to process what’s going to happen to them through their fiction. Meanwhile, Ilonka uncovers evidence that the hospice and its mysterious manager (Heather Langenkamp of “A Nightmare on Elm Street” fame) are hiding a secret that could save her life. And so each episode alternates between Ilonka’s discoveries at the center and a story being told by one of her friends. Foundationally, the show becomes about how and why we tell stories to process the real world. And how these stories specifically say more about the person telling them than anything else.

There are eight members of The Midnight Club, and the season’s over-long, ten-episode structure allows us to get to know all of them to various degrees. Standouts include Kevin (Igby Rigney), a potential love interest who tells a multi-episode story about a serial killer that gives the show some of its most striking imagery, and Anya (Ruth Codd), Ilonka’s bitter but fierce roommate. Kevin’s arc is apparently based on another Pike work titled The Wicked Heart, while another tale stems from Road to Nowhere. Taking other Pike works and embedding them in this one may be smart, but I sometimes wanted tales that felt more organically like they were coming from the lives of characters like Kevin and Anya. Kevin’s story is well-done, but one can tell it’s not quite Kevin’s story—it's a writer/creator getting clever.

It's also interesting to learn that most of Ilonka’s adventures at Brightcliffe are the creation of Flanagan and Fong and not from the source. It must have been daunting to consider adapting a book about kids telling stories without adding all kinds of other material, but the stuff about a former patient who may have lived and cult members in the woods is the least compelling here. This is a show about a group of patients and the construction of the Brightcliffe mysteries forces Ilonka off to her own other program too often, away from the group.

And that brings us to why the show still mostly works—this group of young performers and their willingness to play Flanagan, Fong, and Pike’s games. Benson is an engaging lead, Rigney is very charismatic, and Codd is a captivating actress. When they are allowed to bounce their very different characters off each other, “The Midnight Club” is at its best. The way these young performers work off and challenge each other gives “The Midnight Club” its strongest material and reminds fans of Flanagan’s shows that he has always been a creator more interested in the “why” of a ghost than the jump scare that comes with it. These kids are forced to understand death more than they should have to at their age. They’re forced to come to terms with the impossible—that all of their dreams will end early. And Flanagan and Fong treat their young characters and young viewers with admirable emotional respect, confronting issues like suicide and homophobia with empathy instead of exploitation.

The Flanagan/Netflix machine shows no signs of slowing production. His promising adaptation of “The Fall of the House of Usher” is up next, and there will certainly be something after that. Where will “The Midnight Club” stand in this legacy? It’s unlikely to be anyone’s favorite of the Flanagan projects. However, it could be a new horror fan’s first. And, perhaps more importantly, it could be something that really speaks to a young person who has been forced to deal with death unfairly, looking for a story to help them figure out how to write their own. 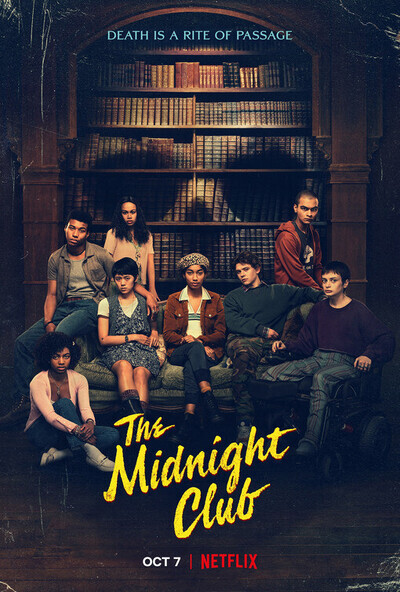