In 1972, the Canadian government funded a 98-day study on the effects of marijuana on a group of women. It was pitched as “get high, get paid, don’t get arrested.” The intent was to prove that legalizing cannabis would result in a country full of lazy—and very hungry—slackers who would bring down the economy. Or so one thought. At the time, possession laws resulted in strict and very long jail sentences which, as behaviorist Dr. Barry (Gregory Ambrose Calderone) says at the end of “The Marijuana Conspiracy,” was perfectly acceptable when it was Black and brown people getting arrested for it. Once White kids like the sons of judges and politicians started having to do those bids, the government got sneaky.

This assessment is dispensed in dialogue that sounds as clunky as the shrink at the end of “Psycho” trying to explain Norman’s condition. A lot of writer/director Craig Pryce’s recreation of this real life event has the awkward, rote nature of a “Very Special Episode” of a 1980s American sitcom. Each of the main characters comes with their hopes, dreams, characteristics, and pasts neatly packaged. Everyone has a special plan for the money they will receive should they finish the project. The antagonists are rendered just as simplistically, though an attempt to flesh out one of these characters comes so far out of left field as to seem spliced in from another, far more preachy film. Thankfully, the movie takes a neutral stance on weed consumption; any issues that arise are due to the experiment being tampered with in ways its participants did not consent to when they signed up. A constant source of amusement is how frustrated the government is when it’s reported that the stoners are working harder at their menial jobs than the marijuana-free control group.

The proceedings are shellacked with needle drops from earlier in this era, as well as a score that sounds period-appropriate. The first hour is so heavy with this it becomes a near-parody of this style of filmmaking. It’s as if we can’t suspend our disbelief that it’s 1972 unless Steppenwolf is on the soundtrack singing about “The Pusher.” Granted, the film isn’t so obvious as to take such low-hanging fruit as Curtis Mayfield’s “Pusher Man,” which was actually written in 1972, but if it sounds like stoned hippies should be swaying to it while the cinematography gets hazy, you’ll probably hear it here. I was tempted to stop the screener so I could wobble around barefoot in my apartment to “Easy to Be Hard” (which gets name-checked by one of the women) and “Psychedelic Shack.”

Hippie-swooning temptations aside, I remained tethered to “The Marijuana Conspiracy” thanks to the excellent performances by the actresses playing the main roles. They transcend their thinly-drawn characterizations and display the convincing level of camaraderie shared by a group who have gone through trouble together and emerged victorious at the end. There are numerous scenes of them getting blazed twice a day in the name of science, as well as moments when the women just talk and relate to each other. Pryce uses the latter to deliver exposition and predictable explanations of intent, but the actors sell the material and make it richer than it would play otherwise.

We meet the short-haired, street-smart Mary (Julia Sarah Stone) first. She’s giving advice to an out-of-her-element younger woman on a street in Toronto. “Go home,” she tells her, offering some money to get a bus ticket back to safer environs. This experiment will not only give Mary a place to stay, but money she can use for her own place once she’s finished. Next, we meet Mary’s coworker, Jane (Brittany Bristow) as she’s being passed over for a promotion she deserved at her firm. Her boss tells her that they were afraid she’d get pregnant. He also quotes Bob Dylan, calls her a “broad,” and is dismissive before she cusses him out and quits. Lastly, we meet Mourinda (Tymika Tafari), the requisite Black girl who’s outspoken, fun, and keeps her joints in her enviable Afro. “They never search here!” she tells her boyfriend. “Because they’re scared of it.”

Meanwhile, Dr. Barry is meeting a government official to discuss the experiment that will bring these young women together, a study conducted on 18-25 year olds. The official makes no attempt to hide that he’s hoping for a result that can be skewed for his benefit, yet even after Barry calls out the ruse, he still signs up for this “to see how everything plays out.” That’s what behaviorists do, he tells us. While not a full antagonist, Barry is still bad news, upping the THC content in order to hasten negative side effects in his subjects. When the group bands together in protest, demanding to know what is happening to their bodies or else they’ll quit, Barry breaks their union by offering more money to those who complete the study.

In fact, all of the men we meet range from skeevy to sleazy to outright hateful. On the skeevy spectrum, though the film thinks he’s harmless, is Adam (Luke Bilyk), a young guy Barry hires as one of his observers. The women will have observers, medical and scientific, watching them at all times to monitor their progress. The observed folks find this creepy. Adam especially likes to monitor Janice (Kyla Avril Young), who in one scene is clearly uncomfortable with his inability to keep his damn eyes in his head. Even the other group members point out that he looks like a wolf in a Tex Avery cartoon. He’s the wrong type of guy to be hanging around a bunch of women who may not always have their wits about them, and while “The Marijuana Conspiracy” does its best to keep his romantic matters consensual, it’s a bad idea that distracts us with an unnecessary subplot.

An even more unnecessary subplot involves Dr. Spencer (Paulino Nunes) and Nurse Alice Jones (Marie Ward). Nurse Jones’ stern behavior toward the group earns her the nickname “Nurse Ratched” (don’t worry—Ken Kesey created her in 1962, so she’d be a known quantity here). Those interactions with her patients are fine, but her personal life suddenly becomes a plot point, resulting in a ham-fisted tour of Dr. Spencer’s homophobia. I don’t mean to sound dismissive, but it’s shoehorned in here so poorly that it plays like a pander that has nothing to do with the rest of the story. Is her sexuality meant to explain her strict demeanor?

At over two hours, “The Marijuana Conspiracy” might be too long for your viewing pleasure. I kept watching it, however, and not under duress. Young, Bristow, Tafari, and Stone are all memorable, and you really root for them. A common thread in their willingness to be guinea pigs is the notion that the money will help them be more self-sufficient in an era that forced women to be more dependent on the men who most likely will not help them. There’s an undercurrent of anger running through that reality, and the audience hopes they’ll get their money. As for the test results: To this day, neither the women nor the public knows the outcome despite many queries by participants and scientists alike. I guess the government didn’t like the data.

Now available on demand and on digital. 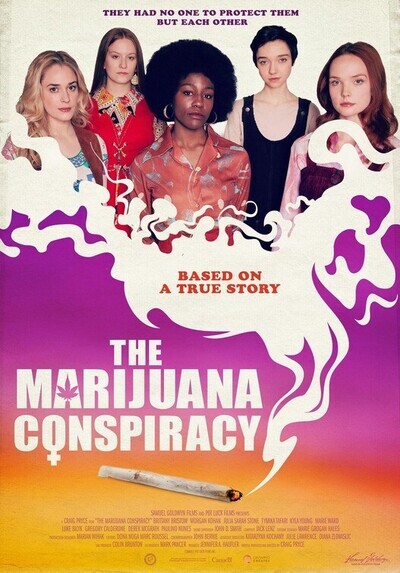