Netflix's “The Main Event” is about a magical mask and wholesale storytelling device that gives superpowers to an 11-year-old wrestling super fan named Leo (Seth Carr). Because it makes him more confident (by making his voice deeper, and giving him super strength), Leo uses those powers to become a wrestling phenomenon, despite still having the scrawny frame of an 11-year-old. The script for "The Main Event" wants to make it about the heart that it takes to be a wrestler worthy of the WWE, but this movie is so blatantly not about that. This fantasy from director Jay Karas, as harmless as it may be, is all because of the mask and the over-the-top abilities it gives one lucky preteen. It's not about the hard work that's intrinsic with all of wrestling, so much as the WWE's open willingness to sacrifice its core values for lazy family-friendly amusement.

Leo stumbles upon this mask as kids always do in movies like this—by accident while escaping school bullies (who are also wrestling fans, but they seem to get a different message from it). Despite how it reeks like “old bus seats,” the blue mask gives him Krypton-grade strength: he can kick down trees, do quadruple backflips, and hurl beer kegs through auditorium ceilings. When he does the latter during a tryout, in order to enter an amateur tournament for the corporation’s NXT branch, a bunch of real-life wrestlers like The Miz stand in awe. No one questions how someone of Leo's size can do that, or that he does indeed look like a kid, which makes the people in the WWE and the movie's writers look equally dumb.

His invincible alter ego Kid Chaos has no equal when he puts on that mask, and such an overzealous plot component makes for tedious, repeatedly empty moments of watching Leo's physically impossible strength and speed against his adult opponents. Not even the sweaty wrestler who can fart for 25 seconds (Niko Bogojevic) has a chance against him, and that’s all part of how the movie tries to make professional wrestling look like it’s a PG-rated battle royale that sometimes plays out in slow-motion, all without the threat of an 11-year-old getting hurt. Later on in the story, because the script is so amorphous about the mask’s powers, it even lets Leo do some crime-fighting while out with his friends. Kid Chaos becomes a wrestling superstar and also a web-less Spider-Man, while seeming like a cheap version of both.

There’s a lot more on Leo’s mind outside the ring, and as busy as the script may be with his family and friend drama, it struggles to ring emotionally true despite some spirited supporting work. Tichina Arnold gets in a few giggles as Leo’s grandma who wants to be a social media influencer and lusts after the wrestler Kofi Kingston; Adam Pally plays Leo’s sad and overworked dad, who keeps putting off an important conversation about how Leo’s mom simply abandoned them. For good measure, the script even throws in a talent show that Leo agreed to perform in with his new friend and crush Erica (Momona Tamada), and bases a conflict on whether Leo can look past his time-consuming fame to honor that commitment.

For a movie made to further sell the WWE as a family-friendly fantasy factory, it’s not very flattering. For one, you’d think that they’d check IDs when it comes to who enters their tournaments, and the detail that literally anyone could weasel into their competition is a clumsiness that’s never really explained (even when one of Kid Chaos’ fans speculates that he’s Kevin Hart, method actor). And instead of Leo's progress feeling triumphant, it becomes hard to even root for Kid Chaos when his ascension to the climactic cage match is made possible by Leo essentially cheating, with the script's four writers giving up on how to legitimize him. By the time you get to Leo's final showdown with the towering, monosyllabic baddie Samson (Babatunde Aiyegbusi), "The Main Event" fully embraces the laziest shortcuts to glory.

I know, I know. Kids are merely intended to take in the elementary lessons in between the matches, and the adults aren’t supposed to overthink something that features so much jaunty music and wide-eyed young actors. But “The Main Event” treats the prospect of making a kid's sports movie as a full excuse to throw together a chintzy product, and when movies are so transparently indifferent like this, it’s hard to forgive them even if they depict a good kid living a dream. Even worse, it's a considerable step back from last year’s WWE story “Fighting with My Family,” a much better movie that was inspired in its filmmaking and story about rising the top. “The Main Event” pointlessly adds magic to the spectacle of wrestling, and makes for a bland, wearying movie that should be a lot more fun, and authentic. 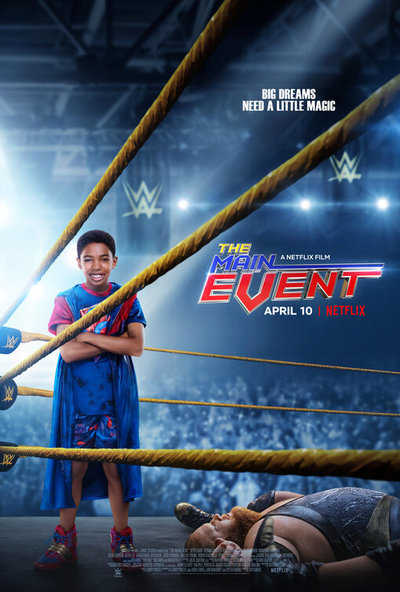