“The Long Night” wants to create a sense of encroaching fear and unease in viewers but cannot inspire much of anything other than boredom and apathy. The problem is not the fact that it's nothing more than a collection of overly familiar horror film cliches. That could be forgiven if the filmmakers took those tropes and figured out ways to transform the familiar into something fresh. Instead, "The Long Night" is content to merely trot those elements out with a minimum of creative effort as the film plods towards a conclusion that will shock absolutely no one.

Grace (Scout Taylor-Compton) is a young woman who never knew her real family and has spent years trying to track them down. When she gets a call from an investigator who claims to have a significant lead on her parentage, she and her boyfriend Jack (Nolan Gerard Funk) hop into their car and leave New York City for a trip to the investigator’s isolated plantation home in the Deep South. When they arrive, the guy isn’t there. But as they let themselves inside to wait for him, weird things begin to occur. Snakes start turning up everywhere. A mysterious altar is discovered in the nearby woods. The phone reception goes from clear to menacing. Most significantly, once the night falls and they finally decide that maybe it's time to flee, they discover that their car is inoperable and the house is surrounded by what appears to be members of a mysterious cult who are sporting goat-head masks and who clearly are there for something ... or someone.

All that I have recounted takes place within the film’s first half-hour, and the rest of the movie consists of Grace and Jack fighting off the invaders while trying to figure out what they want with them. I suspect that most viewers, especially those with a fondness for horror films, will pretty much figure out how things are going to unfold long before they do, but neither director Rich Ragsdale nor screenwriters Mark Young and Robert Shepp make any attempt to play with those expectations. Instead, they are content to simply go through the expected motions, and while they enact them with a certain degree of craftsmanship, their efforts do not extend much further than that. Even the inevitable “BOO!” jump-scare moments when someone or something suddenly pops up to startle everyone on the screen and in the audience feel more perfunctory than anything else.

Beyond the lack of originality, the film also suffers from a lack of engaging characters. Grace is sweet and pleasant enough and Compton-Taylor’s performance is probably the best thing here, but she is just not particularly interesting. Jack, on the other hand, is such a Grade-A twerp right from the opening scenes that viewers will be actively rooting for something nasty to happen to him. (That said, I was amused by the part in which he attempts to intimidate the crowd of cult members gathering outside by informing them he went to Princeton.) Since it is impossible to develop a rooting interest in either of them, the whole thing just becomes an increasingly tedious exercise.

“The Long Night” feels as if it was scribbled out during the downtime at a regional horror convention and cast from the available pool of guests and attendees. (Genre veterans Jeff Fahey and Deborah Kara Unger also turn up in brief roles.) The people who made it clearly know what elements should turn up in a horror film but are unsure as to how to make them actually scary. (Towards the end, "The Long Night" just seems to start tossing ideas in at random in the increasingly desperate hopes that something will finally stick.) Throw in a complete lack of energy, lots of padding, and absolutely no sense of humor regarding itself, and even the most indulgent of genre fans will find "The Long Night" a chore to sit through. 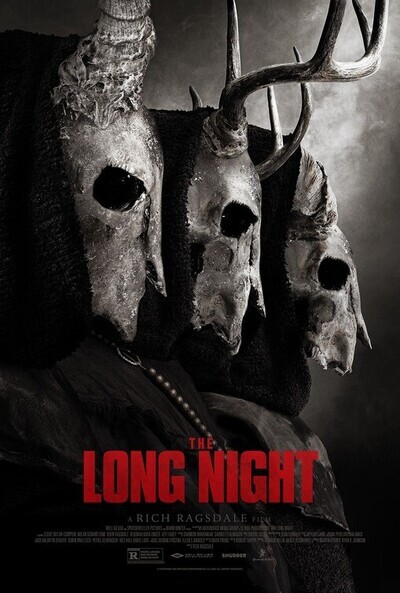 Rated R for violence, language, some disturbing images and nudity.

Deborah Kara Unger as The Master