Robert Altman’s “The Long Goodbye” attempts to do a very interesting thing. It tries to be all genre and no story, and it almost works. It makes no serious effort to reproduce the Raymond Chandler detective novel it’s based on; instead, it just takes all the characters out of that novel and lets them stew together in something that feels like a private-eye movie.

The private eye is, I suppose, a fairly obsolete institution in our society. I’m not talking about the divorce case specialists and the missing persons guys; I’m thinking of the Chandler, Dashiell Hammett, Ross MacDonald kind of hired eye whose occupation takes him into glamorous danger and who subscribes to a weary private credo. The private eye as a fiction device was essentially a way to open doors; the best novels of Chandler and the others are simply hooks for a cynical morality.

Altman seems to understand this. He knows we don’t care any more about the plot than he does; he agrees with Hitchcock that it doesn’t even matter what the plot is about (as long as it’s something). The important thing is the way the characters spar with each other. But Altman has added a twist: Instead of making his private eye into a cool, competent professional, he makes him into a 1950s anachronism. Philip Marlowe has been in a lot of movies, but never one in which he was more confused than he is in this one.

The story, or whatever you want to call it, involves a murder, a missing person, and an alcoholic writer with a bewitching blonde wife. There are also some gangsters and a cat. The writer and his wife are played with really fine style by Sterling Hayden and Nina van Pallandt -- who not only demonstrates that she can act, but also that a real woman is infinitely more interesting on the screen than some starlet beauty-school graduate who should be leading the pompon team.

The middle of this mess is inhabited by Elliott Gould, as the chain-smoking, mumbling, disorganized Marlowe. It’s a good performance, particularly the virtuoso ten-minute stretch at the beginning of the movie when he goes out to buy food for his cat. Gould has enough of the paranoid in his acting style to really put over Altman’s revised view of the private eye.

Altman doesn’t string his scenes together to tell a taut story, but he directs each scene as if he were. There’s an especially memorable scene involving Philip Marlowe and a gangster (played by Mark Rydell, who is usually a director). The gangster smacks his girlfriend with a pop bottle and then snarls at Marlowe: “Now that’s someone I love. Think what could happen to you.” The scene sounds rather grim in print, I know, but in the movie it has a kind of hard-boiled desperation to it. It feels like it belongs in a private eye’s life and so does the whole movie -- right up to the ending, which is really off the wall. 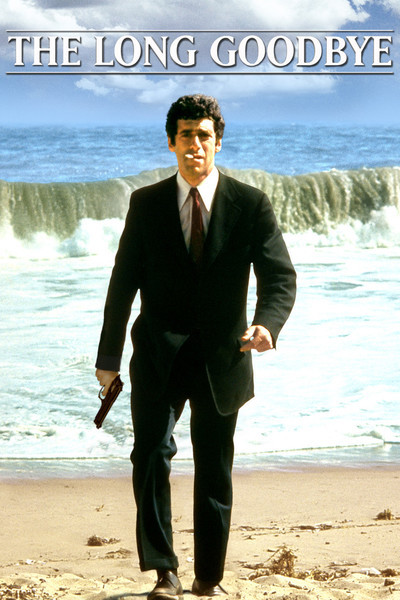