Along with today's “Black Box,” the quartet of films from Amazon's “Welcome to the Blumhouse” package also includes a 2018 title by writer/director Veena Sud, a remake of the 2015 German film, “Wir Monster.” This version stars a 15-year-old Joey King (that’s two “Kissing Booth” movies ago, at least), put in the middle of psychological drama that nearly succumbs to its glacial pacing. Very little about this movie works, in spite of a certain ambition in telling a story based solely on unfathomable decisions.

King stars in “The Lie” as Kayla, a teenager who kills her friend Brittany one day (Devery Jacobs) by pushing her into an icy river. This sends Kayla's divorced parents into panic mode, facing choices they never thought they’d have to make. Her father Jay (Peter Sarsgaard) is most immediately in denial, even though he tries to find the body at first, and spearheads a campaign with her mother Rebecca (Mireille Enos) to cover it up. They can’t let their child go to jail for such a crime, and so they decide to lie about it. When Britney’s father Sam (Cas Anvar) turns up asking where his daughter is, their ramshackle alibi seems to deteriorate with each action.

Sud's film is the case of a morality game that never grabs you, despite a nightmarish scenario with which no one would want to be faced. This is unmistakably in part because of the couple the film focuses on and how they choose to go about their crisis—by getting ahead of the scenario using Rebecca’s connection with local law enforcement, by hiding out in the upper-middle class digs, and trying to shift the blame to those who are continuously being harmed by their selfishness. The odds are in their favor, and it’s not nerve-wracking in the slightest, nor interesting to see how they try to toy with them. Something must have compelled Sud to tell this story, in this form, and yet it is completely lost in the project's self-seriousness.

You can try to find some type of character study in these gloomy characters, inhabiting a snowy world purely made of grays, whites, and blacks, but you’ll only get performances that are primed to detonate, or comprised of repressed tears that don’t contribute to the overall slow burn. Even for a separated couple reconfiguring their problem-solving dynamic as parents, there’s just no spark from Enos and Sarsgaard as their characters go from one bad idea to another. And King has a similar lack of definition, with a character who is even more difficult to wrap one's head around. Why is she so calm, or able to tune much of this out? She's just in shock, her parents reason.

But the distant experience of "The Lie" also comes down to the story—for a movie about all of these drastic actions that shake this house of cards, you believe everyone's actions less and less. It’s a mighty contrived movie, to put it lightly, from its ridiculous opening murder to its ridiculous ending twist. The less that "The Lie" is recognizable to human behavior, the less it proves to have a point. 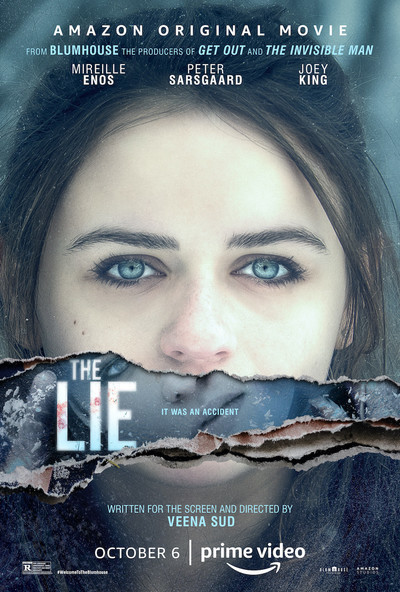 Rated R for language throughout, some violence and brief sexuality.