The Legacy of a Whitetail Deer Hunter

Jody Hill makes movies and TV shows about men so blinded by their own egos and theories on what’s right and wrong that they become outcasts. The protagonists of “Eastbound and Down,” “Vice Principals” and “Observe and Report” aren’t so much typical man-children as the kind of people blissfully unconcerned and unaware of their impact on the people around them. His first film since “Observe,” Netflix’s “The Legacy of a Whitetail Deer Hunter,” looks on paper like it would fit so snugly into this theme that it would allow Hill to do some of his best work to date. Maybe Hill has just gotten older or maybe the concept was almost too perfect for his interests because this is a surprisingly toothless and ultimately flat film. It’s salvaged by a truly genuine, sometimes great performance from Josh Brolin, but he’s the only reason to take a look.

The King of Summer 2018 (the guy has been in three blockbusters already—“Avengers: Infinity War,” “Deadpool 2,” “Sicario: Day of the Soldado”) stars as the fantastically-named Buck Ferguson, the star of a series of hit hunting videos called “Buck Fever.” In each episode, shot by his loyal cameraman Don (Hill regular Danny McBride), Buck embraces the world of the deer hunter, taking viewers into the world he knows best. Of course, everything else in Buck’s life is a little less consistent. His ex-wife (Carrie Coon) is about to remarry the opposite of Buck in a guy named Greg (Scoot McNairy) and so Buck tries to hold on to what he knows and loves by taking his son Jaden (Montana Jordan) to shoot his first deer. Don will record it; Jaden will fall in love with hunting and his dad at the same time; everything will turn out fine. Of course, there’s no movie if that’s the case.

Jaden doesn’t quite live up to his dad’s expectations, wishing he was talking to his girlfriend on the phone and listening to his favorite band instead of sitting in the cold, waiting for a deer. The world of hunting is where Buck has power and expertise, two things that middle-aged men often feel like they’re losing, especially as their sons age and become their own men. Buck has to control every dynamic, reflected even in the way he orders Don around. We learn that Don once lost a toe to frostbite because of how much dad needed to catch a deer to make for the best video. “Legacy” is about how ritual and some misguided theory on “what it means to be a man” can totally skew priorities.

Brolin gets it. He understands how men like Buck often reach out to bond with their children by forcing what they care about into their son’s life instead of being interested in them as people. He doesn’t really get his own kid—doesn’t even know that he’s been playing guitar for two years. And he hasn’t been there for him during the divorce. Brolin allows just the right amount of melancholy to seep into Buck, who could have easily been a caricature of the “macho hunter” and a truly loathsome asshole. Buck is who he is and Brolin conveys the honest worry that just being Buck won’t be enough for his son anymore.

The problem is that, even at 82 minutes, “The Legacy of a Whitetail Deer Hunter” runs out of steam. The final act, in which Hill and company try to get more serious, doesn’t work. It’s as if they came up with an interesting concept and went to the woods before they devised a way to end the film. He can’t find the right tone for it and what could be called an action climax becomes melodramatic. The truth is that alpha men like Buck often don’t get the big ending or breakthrough moment with their kids that they so desire. It feels like Hill knows that and that’s why the ending doesn’t click. His heart’s not in it. He’s much more interested in men who are lost in the woods than those who find their way home. 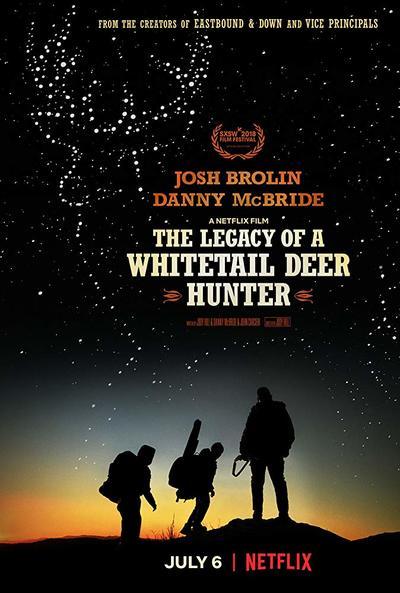 The Legacy of a Whitetail Deer Hunter (2018)