It’s all based on a true story, or as the opening credits suggest, “Some ridiculously f**ked up sh*t.” But the real life guy is Ken Baker, an E! TV personality whose memoir Man Made: A Memoir of My Body came out in 2001. That “The Late Bloomer” manages to screw up his stranger-than-fiction story is a revealing flaw; answering to Ken’s tale with the irony of an unqualified but somehow brilliant sex therapist is a grotesque contrivance that pointlessly makes the film’s pitch more confusing. How can this intelligent man think he should talk to people about sex when he hasn’t had any? In articles on Baker, he says that denial was a huge factor to the secrecy of his condition. But “The Late Bloomer” turns a fascinating biological concept (one with comedic potential, yes) into a huge stretch, distancing us from whatever made Pollak want to tell this story in the first place.

Pollak’s film does have the boost of Johnny Simmons, who showed that he was game for an unusual masculine narrative with this year’s “The Phenom,” a baseball player drama that takes place off the pitcher’s mound. Here, he’s cast for how boyish he can look as a 30-year-old with a lifeless haircut and oversized suit. But his appearance is played, like everything else, far too on-the-nose. Once Peter’s puberty begins, Simmons is put through a list of montages and set-pieces meant to be like greatest hits of growing up, including rogue erections, reckless masturbation or apocalyptic zits. But with whatever commitment Simmons offers these scenes they always head into the same punchline—that they’re happening to a clueless, helpless adult. When Peter’s squeaky voice is the focus of a radio interview segment about his book, you can imagine how that scene plays out.

Though the extensive supporting cast makes for a loaded poster, the results are disappointing. Brittany Snow is relegated to the love interest who also likes to cook; Kumail Nanjiani and Beck Bennett play Simmons’ far more sexually advanced friends, who offer banter about guy time or watching “Valkyrie” that’s well below their comedic potential; Maria Bello plays Peter's mother, whose open sexual dialogue with Peter makes for tired hippie jokes. Even the appearance of Jane Lynch as Peter’s boss is more of a cruel reminder of how much more efficiently “The 40-Year-Old Virgin” did what “The Late Bloomer” wishes it could. Cameos reveal the movie's cheap taste: model Charlotte McKinney (as "Attractive Woman") appears in the beginning to simply beg therapist Peter for a sex act, which is then appropriately book-ended by a climactic, heavily-anticipated cameo from tacky TV chef Bobby Flay. Really, it’s about the fragments that Pollak gets from his wasted, massive cast, like the image of Oscar-winner J.K. Simmons simulating intercourse using a sausage and a bagel with a smile on his face.

“The Late Bloomer”’s script was written by five dudes, which doesn’t including an additional “story by” credit for a sixth man, or Baker himself. With all of that testosterone and experience put into an 85-minute script, there is a staggering, disturbing amount of team effort to assemble a generic raunchy comedy with no new jokes or statements about manhood. If you’re going with the Broken Lizard or B-grade Judd Apatow aesthetic, at least give us a fresh, goofy visual inspired by the gross chaos of adult adolescence. Mentioning prolific Tinder hook-ups, as it so hiply does when Peter belatedly realizes that he can have sex instead of just masturbating, ain't enough. The best that the five-plus writers can come up with is a sappy third-act revelation involving Peter learning the difference between “acting like a man and being a man.” It’s typical lazy gobbledygook for a movie that wants viewers to fondly laugh about surviving puberty, but is more concerned with horniness than cleverness. 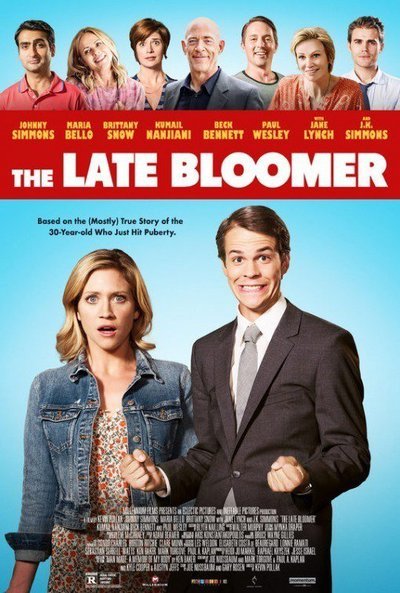 Writer (based on the book "Man Made: A Memoir of My Body" by)