“The Last Victim” plays like a bet between the filmmakers and some sadistic bully who triple-dog-dared them to fit all its disparate plotlines into a cohesive whole. Director Naveen A. Chathapuram and writer Ashley James Louis lose the bet by fashioning a confusing hodgepodge of comedy, thriller, and horror elements. Making matters worse, they wrap it all up in a “homage” to the Coen Brothers and saddle it with narration that sounds like an Android app designed to poorly imitate Raymond Chandler. Of all the directors subjected to inferior rehashes of their work, the Coens engender the worst attempts, because the rip-off artists can never recreate the precarious tonal balance of even their lesser works. The movies play the notes, but the resulting composition is always off-key and the wrong tempo.

This film opens with an intimidating man named Jake (Ralph Ineson) entering a ratty restaurant in Negacion, New Mexico (population 209, according to a helpful onscreen credit). The Hog Heaven BBQ is the site of the series of murders that kickstart the movie. Jake blows away the guy he came to kill, then shoots the grumpy cook who demands he put out his cigarette. For good measure, he also blasts holes in one of his henchmen who has inexplicably turned on him. Before the gunplay starts, Jake converses in nonsensical, faux existentialist sentences, telling his prey that nothing really matters. With his striking figure and unchanging expression, Jake is supposed to evoke Javier Bardem in “No Country for Old Men,” but he’s not even as scary as Tom Hanks in “The Ladykillers.”

Jake is also in charge of the film’s overwritten narration. Ineson’s compulsively listenable deep voice is filled with more gravel than gravitas, but not even Morgan Freeman at his best could have made this stuff work. “All I know is ignorance is bliss,” Jake tells us, “right until the moment the knife slides into your back.” Later, we hear him growl “a bullet is a helluva lot cheaper than a lawyer.” So is a good screenplay.

But I digress. When we’re not with Jake and the dumbass minions he recruits to help him hide the splattered bodies at the Hog Heaven, we’re spending time with Sheriff Hickey (Ron Perlman) and his nerdy sidekick, Deputy Mindy Gaboon (Camille Legg). They’re in charge of finding out what happened and whodunit. A severed thumb is their only lead. Perlman, whose deep voice is just as rumbly as Ineson’s, is also betrayed by the bad writing. He intentionally mispronounces his deputy’s name (he calls her “gay boon”) and tells meandering stories that do little to advance the plot. This movie is 111 minutes long, but it feels even longer when dealing with this odd couple. A sudden, brutally violent plot twist late in the film does little to make either of these characters watchable.

Oddly enough, the most absurd plotline of “The Last Victim” is the one that kind of works. If nothing else, it provides a level of gonzo excitement that makes one wish the filmmakers had jettisoned everything else. Susan (Ali Larter) and her husband accidentally stumble on Jake and his crew disposing of the bodies in an abandoned nature preserve. It was her husband’s idea to do this shortcut en route to her new job at a university, and he pays for it by having his brains blown out. Susan witnesses the murder by Jake and runs off into the wild. She’s pursued over several days, using her wits to survive. Occasionally, she's accompanied by tonally inappropriate songs on the soundtrack that leave the viewer wondering if they're being pranked by the film's music department.

Luckily, it turns out that Susan is not the docile, emotionally fragile blonde we think she is based on an earlier panic attack she suffered. No, Susan is the Liam Neeson of the New Mexico wilderness. Larter is not only convincing in her violence, she adds a few shadings of psychological complexity; Susan is definitely battling her own personal demons while outwitting the men sent to kill her. Chathapuram makes this literal by depicting a peyote-infused sequence filled with demons and fire and hearts being pulled out of chests, but not even this bit of symbolic overkill can ruin Larter’s performance. When she’s not onscreen “The Last Victim” grinds to a halt.

Unfortunately, the desire to spoon feed the audience the film’s themes leads to a “six months later” coda that is so jaw-droppingly ridiculous that the film falls completely apart. Larter does her best to sell the scene, but even her character seems confused by this extraneous, feel-good fade out. The Coens would have had the guts to end with bloodshed, or at the very least, the casual nihilism a film like this should conjure. In this case, “The Last Victim” may very well describe the audience. 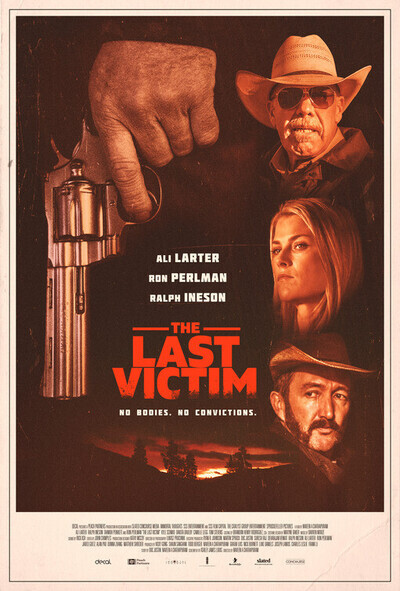