Bear with me. I'm going to have to get a little meta for a minute. "The Last Vermeer" is based on a novel that is based on the true story of Han van Meegeren, the Dutch artist and dealer. He was charged with collaboration with the Nazis for selling a Vermeer masterpiece to Hermann Göring, one of the most powerful leaders of the Nazi party. Van Meegeren was able to prove his innocence by showing that the painting in question was not a Vermeer but was his own forgery.

So, what is fair to expect from a true story about a man who is remembered for being an exceptionally successful liar? All films, even those based on historical events, are a reflection of and in conversation with the issues of the present. And all adapt the true story to compress and clarify what happened and why it is important. Still, we can question the way this film departs from the truth for its legitimacy as a work of art and as a statement of moral imperatives. To what extent are these changes legitimate dramatic license to better illuminate the historical characters and events and to what extent do they detract from it? "The Last Vermeer" takes on a lot of thorny issues of history, art in itself and as it relates to culture and commerce, and what kinds of moral compromises are justified. That is admirably ambitious, but the struggle between history, drama, and exploration of those issues is not always successfully resolved.

First, though, let's look at the movie as a work of drama. It takes place just after the war in Europe has ended, during the chaotic interim period before the Allied Forces returned control to the countries once occupied by the Nazis. Firing squads are shooting those deemed to be collaborators in the street.

In the Netherlands, a former lieutenant in the Dutch Resistance is now in an Allied uniform, investigating the art gallery he believes is a front for a German espionage ring. He is Joseph Piller, played by Claes Bang, who seems to be making a career out of starring in films about the nature of art, with "The Square," produced by this film's first-time director Dan Friedkin, and "The Burnt Orange Heresy."

Tracking the sale of the Vermeer at a then-world record price (in real life, Göring exchanged it for other paintings) brings Piller to van Meegeren, played here be an elegant and wittily enigmatic Guy Pearce. Van Meegeren's home is a dream of luxury and taste. But Piller soon has him in a prison cell—until there is a jurisdictional squabble with the local Dutch authorities, led by a man in a big hat who looks like the sadistic bad guy in "Raiders of the Lost Ark." Piller considers his group morally superior, calling the Dutch rivals "The Ministry of Convenient Justice." When they assume control over van Meegeren, Piller steals him from prison and hides him in an attic. Van Meegeren promises to answer all of Piller's questions if he will allow him to paint.

It may be that Piller's obsession with finding and punishing those who collaborated with the Nazis is fueled by his estrangement with his wife. While he was underground with the Resistance, she was gathering information by working for—and possibly having sex with—German officers in the occupying forces.

The storyline may diverge from the facts more than the look of the film does, with settings and lighting that evoke the Dutch masters. We can also see the influence of films like "The Third Man." Director of photography Remi Adefarasin shows us the contrast between the rubble of the post-war landscape and the sumptuous parties where van Meegeren entertained wealthy Dutch society—and some Nazis. The trauma and fragility of the end of the war underscore the importance of real Vermeer masterpieces as a vital part of the national identity. A sale to the enemy would have been a devastating betrayal.

The highlight of the film is the trial. Van Meegeren insists he was not collaborating with the Nazis; he was defrauding them. The film takes some significant, unnecessary, and distracting dramatic license and spends too much time on characters and relationships that are not as signifiant but these scenes are powerful.

But the verdict is not the end. The film wants to raise questions that could each fully occupy an entire movie: about authentication by experts and validation from critics, and the commercial impact and conflicts of interest inherent in both. Plus, there's a parallel exploration of what integrity means in an occupied territory during wartime. Vermeer is a master because he knew that what to leave out of his paintings was as important as what to leave in. 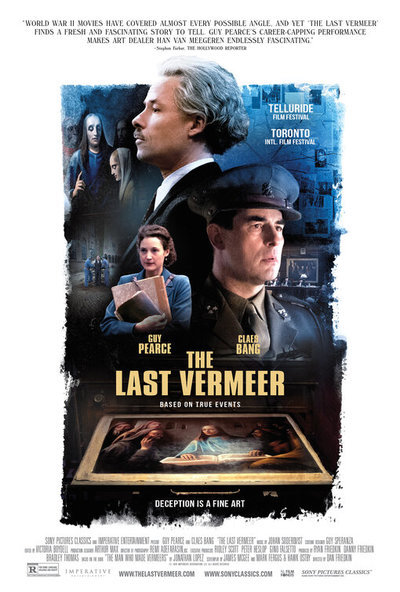 Rated R for some language, violence and nudity.

Writer (based on the book "The Man Who Made Vermeers" by)