The Belgian action star Jean-Claude Van Damme simultaneously is and isn’t the leading man you think he is in the French action-comedy “The Last Mercenary.” Van Damme plays Richard “The Mist” Brumere, a mythic soldier of fortune who must protect and exonerate his estranged biological son Archibald (Samir Decazza), who has, through a series of dopey complications, become confused for Simyon (Nassim Lyes), a “Scarface”-obsessed arms dealer.

As Richard, Van Damme winks at his self-fashioned image as a cartoonish force of nature, like when he nods approvingly at a poster of the cheesy, but iconic Van Damme vehicle “Bloodsport.” There are a few jokes about Richard’s legendary expertise as both a man of action and a lady-killer (“He boned my wife”).

There are also a few rare tender moments where Van Damme lets his emotional guard down long enough to joke about how uncomfortable he is playing against type. Van Damme never really tries to escape his former self, but it is kind of endearing to see him, as embarrassed papa Richard, try to be a better person.

In “The Last Mercenary,” Richard only returns to France after he learns that the French Ministry of Foreign Affairs has mistaken Archibald—who, thanks to his dad’s skillful negotiation, was living under an assumed name, and with diplomatic immunity—for Simyon, a callow arms dealer from the fictional country of Taarghistan. Richard is the only one who can protect Archibald long enough to not only catch Simyon, but to also draw out the French officials who have protected Simyon from arrest. A pokey comedy of mistaken identity ensues.

Unfortunately, there’s only so much funny in farcical scenes where Richard tries to work and bond with the movie’s supporting cast members, particularly goofy comic foil Alexandre (Alban Ivanov) and under-developed sidekicks Dalila (Assa Sylla) and her brother Momo (Djimo). Alexandre is a doughy white guy, so there’s an unfortunate gag where he, wearing only an oversized helmet and a pair of tighty-whities, rides a scooter around Paris. And Dalila and Momo are both inner city youths, so Dalila holds her own during a physical altercation before Van Damme rescues her, and Momo sasses back at a room-full of white socialites after they confuse him for a waiter. Some Borscht belt comedians would blush at this creaky material, were they still alive to do so.

But Van Damme's struggle to become comfortable in his own over-sized persona is sometimes a subject of fun and humor. He’s been wrestling with this topic for years now, perhaps most overtly since “JCVD,” a lopsided, but sometimes unexpectedly affecting 2008 meta-action-comedy. Van Damme has enjoyed a few moments of transcendent navel-gazing since then, like when he re-united with the penguin mascot from “Sudden Death” in the recent (and mostly entertaining) Amazon series “Jean-Claude Van Johnson.” “The Last Mercenary” continues that trend in a handful of stand-out scenes, which is probably more than one can expect given that Van Damme’s late period career is more like extra innings than a brand new ball game.

Van Damme looks fine enough during some over-edited action scenes, like when Richard dispatches a pair of gold swimsuit-clad musclewoman heavies. But Van Damme is clearly at his best when he’s letting the crags in his well-loved stone face speak for him, even during a throwaway gag where Richard camouflages himself by putting on a wig and draping one arm around Lyes, just to avoid being seen by Simyon’s villainous colleagues. The oral sex joke that caps off this gag is less funny, but by this point, Van Damme fans are probably aware that nothing good lasts forever.

So it’s nice to see that the Muscles from Brussels is not only self-aware, but also sharp enough whenever he has to take a baby step or two beyond his own shadow. Richard’s sheepish attempts at reconnecting with Archibald are particularly endearing, as in a car chase where Archibald drives while his dad steers for him, since Archibald doesn’t know how to drive stick. This set piece is fun, and not just because it’s visually coherent, and also scored with Blondie’s “One Way Or Another.”

Van Damme’s insecure performance is also sometimes genuinely charming, like when he tries to announce Richard’s real identity to Archibald, since he’d previously abandoned his son and country following some generic spy-related shenanigans. So: Richard asks Archibald what he knows about his biological father, but he doesn’t get the response he wants (quelle surprise). Thus Richard, the globetrotting and “elusive” killer, must talk himself up. He fumbles for the right words, and tentatively boasts that Archibald’s dad has a “great reputation.” The jittery speed with which Van Damme tries to muscle past such an incredible self-congratulatory statement is about as good as “The Last Mercenary” gets. 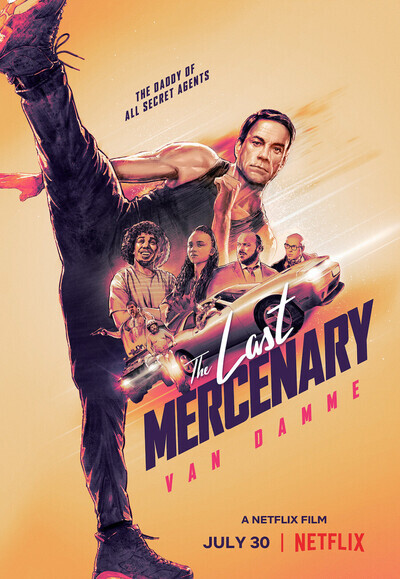