Like a surviving piece of chocolate in a beaten-up heart-shaped box of candy, “The Last 5 Years” offers enough gooey goodness at its center to take some of the bitter edge off its battered take on the harsh realities of romantic commitment.

Still, as a date-night viewing option for this weekend, this nearly all-sung autopsy of a failed marriage would pretty much qualify as a Valentine’s Day massacre.

The adaptation of the intimate off-Broadway musical, which has a considerable cult following, is told from the disparate points of view of a 20-something couple: Jamie, an arrogant rising author, and Cathy, an insecure struggling actress.

But this expanded film experience, a long-gestating pet project for director/writer Richard LaGravenese (“P.S. I Love You,” “Beautiful Creatures”), is a he said-she said standoff with a difference. While Cathy’s story begins at the dissolution of the twosome’s union, Jamie’s account starts with the heady initial rush of instant attraction. The opposing narratives manage to criss-cross during a proposal-wedding sequence and go in opposite directions again from there.

And, yes, this is mostly one warbled number after another, with minimal dialogue—sort of like “Les Miserables,” but with less of a need to grab for a hanky. The tone is set immediately during the first two opposing interludes, exposing both the benefits and the limitations of this gimmick.

Anna Kendrick, who is reaching Liza Minnelli-esque heights as a performer who can wring emotional honesty out of a show tune, turns Cathy’s lament “Still Hurting” into a quietly devastating heart-crusher. Meanwhile, Jeremy Jordan’s belting style leans towards rafter-rattling as he too quickly exposes Jamie’s unflattering tendency toward shameless self-satisfaction in his ode to his new-found “Shiksa Goddess.”

From there, it is one giant step for Jamie as he soon grows into a literary sensation—as his opportunities to be unfaithful with adoring groupies expand accordingly once they are married. Meanwhile, poor Cathy feels increasingly sorry for herself as she fails audition after audition and resents being treated condescendingly as Jamie’s plus-one at schmoozy book parties instead as his equal.

LaGravenese opens up the action with picturesque real-life New York City backdrops such as the Staten Island ferry and Central Park. But even though there are relatable hurtful truths found in this uncompromising pair, there isn’t enough specialness in the characters or their story to make us feel for them. It is pretty much clear from the start that they aren’t the best fit and Jaime’s caddish side will ultimately prevail.

And, yet, smack in the middle of “The Last 5 Years”—perhaps at the two-and-a-half year mark—there are two songs done with such aplomb by both actors and directed with such flair by LaGravenese that you can finally see why this show that has slowly gained in reputation since its 2001 debut is so cherished.

Jordan (TV’s “Smash,” “Rock of Ages” and “Newsies” on Broadway) turns his theater background into a plus during “The Schmuel Song,” a fable about a Jewish tailor and a magical clock that Jamie writes as a Christmas gift for the perpetually defeated Cathy. The moral to this tale, apparently shot in one long eight-minute-or-so take (with live singing, too) while abetted with accents and props, is that her time will come, too. It is probably the one instance when we see Jamie trying to be a cheerleader and the pep talk is indeed a mood-lifter.

Following that is “A Summer in Ohio,” a tour de force for the kinetic Ms. Kendrick as she bemoans the ignominies of a being a summer stock actress, including a gay midget named Karl who is cast as both Tevye and Porgy and a former stripper who performs with a snake named Wayne. There are glimpses of what Kendrick would be like as a twirling Maria in “The Sound of Music” or Anita in a brunette bubble-cut wig in “West Side Story.” And you know what? I would pay to see her in a dinner theater production of either, entree or no entree.

But matters begin to spiral downward during “I Can Do Better Than That,” featuring Cathy in a ‘50s-ish head scarf and Jamie behind the wheel of a vintage convertible—where they obtained this car isn’t revealed—on a road trip to see her family while looking for all the world like Lucy and Desi. The smug song about feeling superior compared to her hometown acquaintances makes us question Cathy, too.

The two-sided premise probably worked much better confined to the stage than spread out on screen. It’s funny that Cathy, during one of her more nerve-wracking tryouts, looks askance at the middle-aged men judging her performance as she tries mightily to please them and thinks to herself, “These are the people who cast Russell Crowe in a musical.” But a Les Mis joke like that must be earned, and this version of “The Last 5 Years” is a little too close to being a miss itself to pull it off. 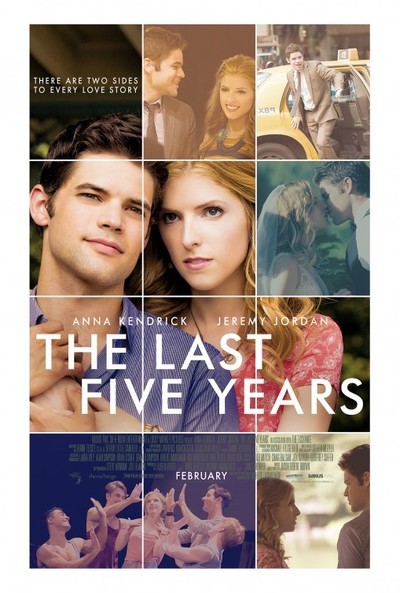