Picking up where “The Kissing Booth 2” left off, Vince Marcello’s second sequel answers a few lingering questions on the minds of Elle (Joey King) and her fans. Will she follow her boyfriend Noah (Jacob Elordi) to Harvard or keep her promise to her best friend (and Noah’s brother) Lee (Joel Courtney), and go with him to UC Berkeley? Why are Marco (Taylor Zakhar Perez) and Chloe (Maisie Richardson-Sellers) back in the picture if not to complicate matters? Can Elle ever make everyone in her life happy?

These questions and more are unceremoniously wrapped up in the final entry to its namesake saga, “The Kissing Booth 3.” To Marcello and and co-writer Jay S. Arnold’s credit, there are a handful of surprises that defy some of the more expected youthful rom-com tropes. But the rest is a lot of the same teenage romantic tribulations we’ve seen before. If “The Kissing Booth 2” was overstuffed with high school drama, its successor reaches to make the most of old tensions over the summer break. Noah is once again threatened by Marco, and Lee is once again acting like a child because his best friend, who is also holding down a job and taking care of her young brother, isn’t paying enough attention to him. It’s so tiresome, that when Elle finally stands up for herself, it’s an all-too-brief reprieve from the boys’ antics.

More tiresome are some of the shenanigans that these Gen Z kids get into. The annoying list of friendship rules are back with an addendum: a list of random summer activities essentially cooked up by Elle to make Lee happy. For reasons I cannot explain, this includes a contest to see who can drink the most frozen drinks the fastest and survive the ensuing brain freeze, a helium-induced karaoke number that somehow brings the house down, and orchestrating a choreographed flash mob, which feels like a blast from the past decade—which could be said for many of the movie’s needle-drops. The only set piece that manages to be more creative than exhausting is a go-kart race based on the video game "Mario Kart," but only if you’re alright with the fact the kids, as they do in the game, throw items to make their competitors crash. Gentlemen, learning a TikTok dance was right there.

King, who normally tries her best to sell Elle’s growing pains of young love, looks a little more checked out this time. She's left behind the wide-eyed optimism of the previous chapters for an Elle who seems so tired by it all, she can do little more than cry or snap at the new woman dating her dad. Elordi’s cool hot boyfriend shtick also seems similarly tired. His character’s macho posturing is less about connecting with Elle than being too insecure with her. Courtney seems to be the only one fully committed to his character, which unfortunately, doesn’t seem to have matured much from when he first protested over his best friend dating his brother. Even perennial scene saver Molly Ringwald, as the boys’ mother Mrs. Flynn, isn’t around for most of the movie to smooth over ruffled feathers and bruised egos.

It’s hard to believe the cinematography of these movies could get worse, but believe me, it does. Likely due to the pandemic or a tight schedule, a number of close-ups of Elle, Lee, and Noah clearly have green-screened backgrounds, looking about as unnatural as many things in the story. There’s one climatic showdown, set in front of the Hollywood Hills sign, that really defies any sort of reason. It’s not so much spectacle or camp, it's just silly. For this last go-around, Marcello committed to the series’ cheaply saccharine premise and only half-heartedly tried to make it look better than an old Aéropostale from the aughts, focusing his camera on mostly white young people (except for Marco and Chloe) against the backdrop of a coastal sun-soaked California. “The Kissing Booth 3” has about as much depth as one of those ads. After the sand has been shaken out of shoes and final smiles have been pointed at the camera, there’s not really much more to the movie. Just a boy, a girl, and the looks they trade with each other. 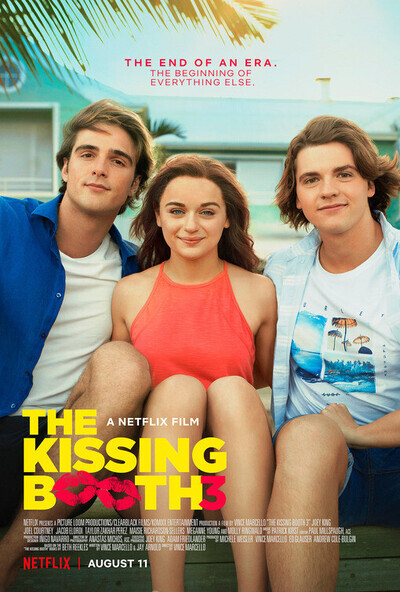 Writer (based on the "The Kissing Booth" books by)