The Kindness of Strangers

Just when we thought movies that assert we are all circumstantially connected via cosmic powers went out of fashion for good, comes along yet another story of intertwined destinies. Outdated from the offset—think Fernando Meirelles’ “360,” Garry Marshall’s “New Year’s Eve” and a certain brand of early Alejandro González Iñárritu films without the miserablism—the frustratingly unrealistic “The Kindness of Strangers” from Danish writer/director Lone Scherfig exploits the aforesaid subgenre’s most testing traits, yielding a syrupy brew thick with twee and an abundance of cringe-inducing moments pulling at heartstrings. Fanciful to a fault and yet carried by an ensemble of committed performers—so purely dedicated that you end up feeling embarrassed on their behalf—Scherfig’s latest effort pursues something naively magical, only to end up with a mélange of miscalculated, cheap sentiments.

The wondrous emporium that sets the stage for our tangled souls is New York City; the town where this critic is from and therefore can confirm: we don’t quite chip in to the flow of things with an unlimited amount of selfless acts on a daily basis. But in the writer/director’s fantasy edition of the Big Apple, generosity floods through the town’s gridded bowels as amply as the East River. The main benefactor—the one that whisks us into this imaginary version of the city—is Clara (Zoe Kazan), a horribly mistreated young mother with two sons, running away from her abusive husband who lives somewhere around Upstate, works as a cop and seems thirsty for violence. After their car gets towed—the fugitive family’s temporary accommodation till then—Clara and her good-natured pre-teen boys Jude (Finlay Wojtak-Hissong) and Anthony (Jack Fulton) brave it out in the cold streets of downtown Manhattan, trying out homeless shelters or wherever would accept them for the night. Thanks to her implausibly polished looks—slick dresses, freshly touched-up waves (who knows how) and elegant shoes—Clara occasionally manages to sneak into hotels and cocktail parties undetected to scavenge for scraps and crosses paths with a number of helpful yet victimized humans who also seem lost in their own ways.

Among them are Andrea Riseborough’s resolute Alice, juggling an impossible schedule both as a tireless nurse of 12-hour shifts and also as a volunteer somehow, working in support groups and soup kitchens. There is also Tahar Rahim’s ex-convict Marc, Caleb Landry Jones’ down-on-his-luck, hapless small-timer Jeff, and the past-his-prime Russian restaurateur Timofey (Bill Nighy), who runs the once-upon-time-popular joint Winter Palace, an old-worldly spot where Marc works as a manager. A fantastical hub for everyone that the story touches, Winter Palace looks like the kind of place where there is an endless supply of caviar and vodka and a side of thick Russian accent 24/7. Except (and here’s the film’s biggest twist): Timofey is not even Russian. His real name is Tim and his fake accent, he believes, is supposed to create a certain intrigue to better his business.

Of course, that never happens. Not that it matters in “The Kindness of Strangers,” as Scherfig—who had previously found exceptional emotional and historical detail within the romantic and deeply feminist beats of “An Education” and “Their Finest”—doesn’t linger on anyone or anything long enough for them to grow into substantial entities. Instead, her film moves along with barely there, heartbreakingly lonesome characters spreading some good deeds while getting lost in the shuffle. We wait—and wait—to learn, for instance, why Jeff fails at everything, how Clara found herself in the midst of a nightmarish marriage and what lies beneath her husband’s (slowly revealed) psychopathic acts. Those answers never get delivered. Similarly underdeveloped elsewhere is the vague romance between Marc and Clara—the one thing that could have helped save the aimless movie that fizzles before it reaches anything halfway rewarding. While Sebastian Blenkov’s picture-book cinematography, aided by Andrew Lockington’s overly sentimental score, insists on a whimsical idea of human unity in New York, it’s too bad that Scherfig’s untidy narrative never connects the dots. 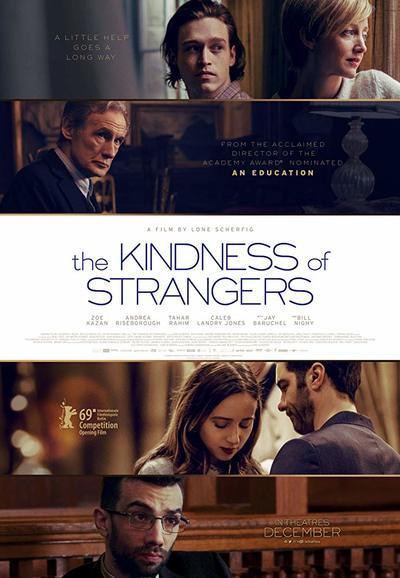