"War is dirty. It’s not how they portray it in movies," says one of the American soldiers convicted of war crimes in the superb, wrenching documentary "The Kill Team." While the remark touches on the psychological realities that led several GIs to murder defenseless Afghan villagers "for sport," as news accounts frequently put it, it also says something about the unique value of non-fiction films in treating fraught subjects like this.

To be sure, Hollywood movies about American soldiers at war have remained fairly consistent, the challenging complexities of outliers such as Oliver Stone’s "Platoon" and "Born on the Fourth of July" notwithstanding. In depicting America’s recent Middle East wars, movies such as "The Hurt Locker" and "Lone Survivor" typically foreground the sensory onslaught of combat and the heroism of individual GIs. Deeply incriminating moral acts, and of course the morality of the wars themselves, largely go untreated.

While "The Kill Team" does not directly address the justness or necessity (or lack thereof) of the ongoing Afghanistan conflict, America’s longest war, it offers a deep, troubling probe into a military culture that both incubates horrifically criminal acts against innocents and throws innumerable obstacles in the paths of soldiers who would thwart or report those outrages. In other words, though this is a story of enormous cultural importance and dramatic power, it’s virtually impossible to imagine today’s Hollywood making a movie about it.

Yet even if some smart indie filmmaker treated it, audiences today might well suspect a degree of bias or distortion in the process of converting fact into drama. That’s where the special properties of nonfiction come in. While director-cinematographer Dan Krauss and his collaborators, producer Linda Davis and editor Lawrence Lerew, obviously shape "The Kill Team" from their own perspectives, the people they show us (and let us hear) are the case’s actual protagonists, which allows us to assay the truth of their accounts from the smallest details of their gestures, intonations and self-presentation.

The man for whom this is most important, and who strikes this reviewer as entirely, achingly credible, is a young soldier named Adam Winfield. With the open, ingenuous countenance of a typical American kid raised in good family circumstances, Winfield grew up aching to join the military and did so at age 17. He shipped off to Afghanistan thinking of the U.S. military in terms of honor, integrity and valor, expecting that he would help his own country as well as the Afghanis in what he did there.

What he found was a nightmarish reversal of those expectations. The platoon to which he was assigned was dominated by a hulking alpha-male sergeant named Gibbs, who served in Iraq prior to Afghanistan, bore skull tattoos that supposedly represented his human kills, and collected his victims’ finger bones saying he intended to make a necklace out of them. Gibbs organized the platoon’s "kill teams," which went into villages, planted a weapon near an unsuspecting villager so that they could claim he was an enemy, and then gunned him down in cold blood—after which came the ritual taking of trophy photos wherein the grinning GIs moronically pointed to or desecrated their slaughtered quarry. (These awful images became trial evidence and news-media fodder.)

The first time Adam Winfield witnessed one of these atrocities, the victim was a 15-year-old boy, and Winfield later recalled the unstinting weeping of the kid’s father and brother. The second victim was an older man whose wife stuck in Winfield’s memory: "That scream from that woman…I’d never heard anything like it before, the sheer grief." Meanwhile, Gibbs came up to Winfield with a big grin and a thumbs-up, and, back at the base, the killers were hailed as "made men" and treated to back-slapping and high-fives.

Horrified as soon as he understood what the kill team was up to, Winfield was in a dilemma about what to do. He communicated with his dad back in Florida, and, Chris Winfield, a former military man himself, launched into a long, fevered campaign of calling every responsible person he could think of; but virtually everywhere, including the offices of chaplains, he left messages and got no return calls. In Afghanistan, Gibbs and his kill-team cohorts told Adam they would kill him if he breathed a word of their activities to higher-ups.

Adam resolved to keep these matters to himself for the short time till his tour of duty was up. But before that happened the kill team took him on another mission and enlisted his participation in the third kill he witnessed. He says he aimed his gun away from the man, but the man died in any case, and Adam not only felt agonizingly responsible afterwards, he was also held to account. Ironically, the truth about the kill teams only came out after another soldier complained about Gibbs and his cohorts’ hash-smoking. Where Adam had expected to go home and turn whistle-blower as soon as he could, he was charged with first-degree murder, along with Gibbs and others.

Filmmaker Krauss got involved with the case when Adam was on trial, and was able to film the soldier’s deliberations with his parents and his defense attorney, discussions that involve torturous decisions about possible pleas and potential sentences up to and including life in prison. Expertly structured and commendably concise at 79 minutes, "The Kill Team" cuts between Adam’s legal odyssey and recollections of the events in Afghanistan that led to it. The latter sections include interviews with not only Adam but two other kill-team members who essentially corroborate everything he says, though their attitudes toward the events are notably different than his: sure, they knew they were murdering innocent people, they say, but the Afghanis are "savages" and war produces pressures that prompt such extreme actions. Plus, many other soldiers were and are doing the same thing; we were just the unlucky ones who got caught.

In the end, it’s these attitudes and the men who hold them that are the most disturbing elements of "The Kill Team." On the film’s moral spectrum, Gibbs, the classic psychopath, and Adam, the hapless victim of Kakfaesque circumstance, represent familiar, comprehensible opposites. But Jeremy Morlock and Andrew Holmes, the two kill-team players who were just along for the ride, seem like guys you can imagine on any high-school athletic team or college social committee. Is their amorality about killing fellow human beings for fun a factor in all wars, a particular product of this seemingly endless war with no evident chance of victory, or an inevitable outgrowth of a culture in which traditional morality has been eroded by video-game violence and an ethos of aggressive, unapologetic self-gratification?

There is one other character in this mesmerizing film who is no less perplexing than the two just mentioned. That’s Justin Stoner, the private who blew the kill team’s cover when he reported their hashish-use to superiors and was beat up by them for doing so. Cocky and impudent, Stoner may not have been involved in the kill team’s predations but nowhere does he say he has any problem with them, and he vocally despises whistle-blowers like Adam Winfield. Ultimately, he proves to be the arrogant survivor: while all the others are given prison sentences, he gets an honorable discharge, and later returns to the military. 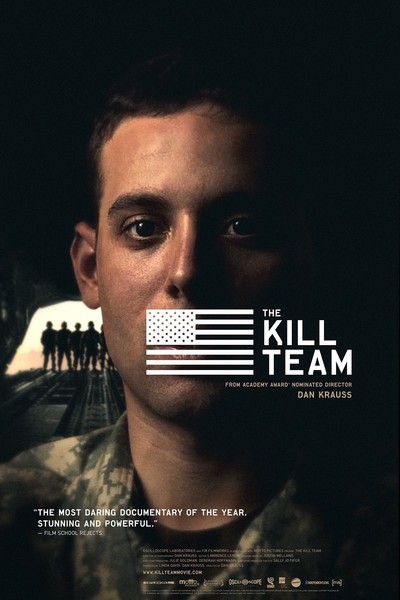