The first time I stumbled upon Clint Eastwood in a film, it wasn’t a spaghetti Western or even his earliest-credited role in “Francis in the Navy,” a talking-mule comedy. It was a Southern Gothic drama with Freudian undertones set during the final days of the Civil War from 1971 titled “The Beguiled," directed by Don Siegel, whose more influential “Dirty Harry,” also starring Eastwood, arrived in theaters the same year and made anti-hero cop history.

“The Beguiled” felt quite provocative to this high-school sophomore—although, in terms of worldliness, I am pretty sure I had read my mother’s copy of “Valley of the Dolls” by then. It could have also been one of the few war-themed movies I saw in its entirety by that age. The premise: A wounded Union soldier finds shelter in a Southern all-girls boarding school and eventually bamboozles nearly each female resident with his masculine wiles, from the middle-age headmistress to the youngest student. But when the calculating Yankee pits one against the other as they vie for his affections, his fate is sealed as the women assume the upper hand.

The plot description of “The Keeping Room” put me in mind of that less-edifying yarn of yore. Two motherless Southern sisters, stern gunslinger Augusta (Brit Marling) and moody daydreamer Louise (Hailee Steinfeld), along with their female slave Mad (Muna Otaru), must fend for themselves on their isolated farm near the end of the Civil War. A pair of drunken renegade Union soldiers, in the midst of a rape, looting and murder binge while supposedly  acting as scouts for Sherman’s March to the Sea, spy a desperate Augusta when she seeks out medicine at a nearby saloon.

Full of wicked intent and with a zombie-like singlemindedness, ringleader Moses (Sam Worthington) and sidekick Henry (Kyle Soller) are determined to hunt her down. Judging by their previous bouts of violently abusive disregard towards women—and humans in general—the battlefield is set for a bloody clash of the sexes.

The differences between the two films say a lot about not just the state of cinema now and then, but also the mindset of our culture. “The Beguiled” was a misogynistic fantasy from a less-enlightened era with a giddy grindhouse sensibility, alleviated somewhat by the presence of such fine actresses as Geraldine Page and Elizabeth Hartman. If it made any statement about feminine fortitude, it was mostly a side product of a desire to titillate.

“The Keeping Room,” meanwhile, unwaveringly takes the proto-feminist high road in its artier approach to similar material, while ably demonstrating how the devastation of war can obliterate any sense of shared humanity among fellow mortals. British director Daniel Barber makes good use of his plaintive score, long stretches of wordless silence and mostly deserted natural surroundings to put the audience on edge. About the only sounds heard during the film’s opening seven minutes come courtesy of several resounding gun shots and an angry bark-off between a snarling Doberman and the female slave in his path.

While the women characters in “The Beguiled” are almost driven mad by the lack of menfolk in their lives, the trio of women in “The Keeping Room” is more concerned with their own well-being and simply staying alive, even if they do briefly own up to missing male companionship.

It’s also interesting how Mad is treated as an equal by Augusta, even if petulant Louise hasn’t gotten with the program yet. The younger sibling also has a bit a Scarlett O’Hara fever, as it were, as she defiantly plays dress-up in her late mother’s fancy frock. Despite the stoic Augusta being clearly traumatized by her reduced existence, Marling displays plenty of hard-bitten pioneer spirit with her utilitarian garb and tangled mane, doing what she has to do to make sure this hardy sisterhood of three continues to survive.

For about two-thirds of its length, before the inevitable confrontation with the soldiers occurs, “The Keeping Room” steadily holds the viewer in its narrative clutches. Then Barber and screenwriter Julia Hart break the spell by allowing the characters to speechify too much. What was simply and effectively suggested before suddenly becomes blatant. Not helping matters is the way some of the actors, all contributing solid work here, often lapse into a bad case of mush mouth while emulating a Dixie accent.

The film ends with a twist that suggests what lies ahead actually might be more interesting than what we have witnessed so far. “The Keeping Room” does exceed “The Beguiled” with its progressive gender politics and morose minimalist approach. But when it comes to presenting a more watchable story, the older film would be the one that stops you from clicking to another channel if it pops up on TV. A little bit of pulp does help the message go down. 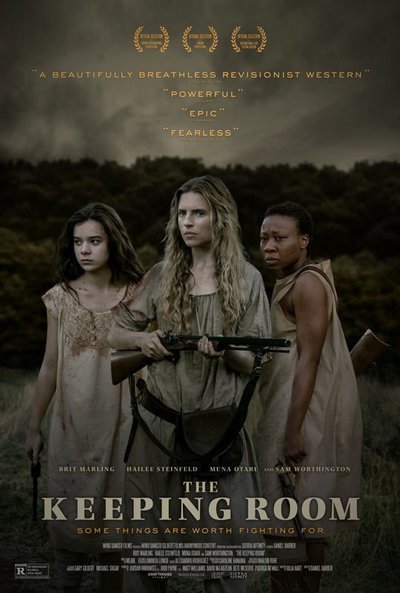